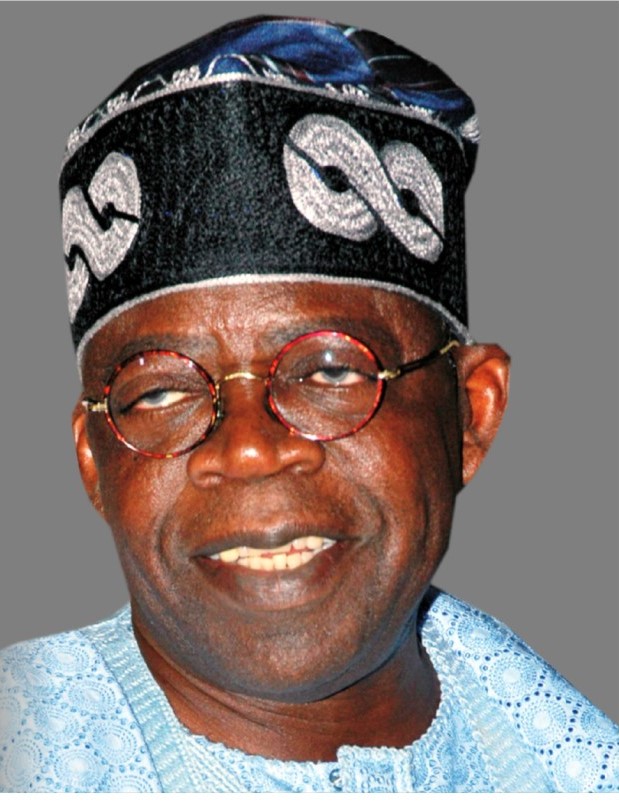 This man has been labelled master strategist because of his many achievements in life so far. Be it in business or politics, he’s a game-changer. And when you talk about one individual in Nigeria who God has blessed and favoured with money, influence, power, wisdom etc, no one comes close to the man called Jagaban Borgu, better known as Asiwaju Bola Ahmed Tinubu.

Some call him a political juggernaut. Others simply call him a Political Acrobat. And to a few, he is a Political Strategist. But If you choose to call him Jagaban Borgu, a chieftaincy title conferred on him in Niger State, you will also be correct. You can also call him the Asiwaju of Lagos, a title late sage, Awo held till he died. His 2 favourite titles are Asiwaju & Jagaban. And he loves being called by those titles.

Currently, he’s been tipped to run for the upcoming presidential election. A few weeks back when he came back from the UK where he had knee surgery, a newly formed group that want to ensure his aspirations to become the next President is actualized had a welcome party where he was received. The group which is called The South-West Agenda (SWAGA) was created to ensure he (Tinubu) runs and wins the next Presidential election. Don’t also forget he’s the national leader of the All Progressives Congress (APC).

What you are about to read is the amazing facts why Tinubu would be hard to beat in the next election, not just for his doggedness in  Nigeria’s politics, but for many reasons we would be telling you below.

Let’s tell you that he is the only man in Nigeria’s politics who has successfully and consecutively installed 3 governors after him. He is the only man who has fought the government at the centre to a standstill for more than 4 years, while he was governor of Lagos State.

The truth is Tinubu has built his political empire to an enviable height that top politicians, especially in the South-West now seek his blessing before vying for any political office. A lot of them (politicians) have turned his house at Bourdillon, Ikoyi, Lagos to a Mecca of a sort. It is an arena for decisions making. It is a place where top politicians converge to discuss key issues in politics. A lot of high profile politicians and government officials often visit him there. They include Governors, Ministers, First Class Kings and Chiefs, even the Vice President of the country, who many believe is also one of his guys in the government.

It’s also believed that his decision of picking Buhari to run for the party’s Presidential election in 2005 has also placed him above Chief Awolowo. Tinubu is the only politician in the history of the country who had successfully installed a President. Many would tell you that Tinubu was instrumental to Buhari becoming President.

The big news now is that Tinubu who many refer to as a political figure/political godfather is being tipped for the Presidency. Although, he hasn’t publicly declared his ambition, but a group called SWAGA has been canvassing and pleading to him to run and it’s almost certain now that he would yield to their call. And those who are very close to him have not only confirmed it, they have been campaigning for him ever since the news came out.

This week, City People brings you 10 factors why he would be hard to defeat.

HE HAS MANY OF HIS ‘BOYS’ IN GOVERNMENT

Tinubu is one man who has hundreds of his boys in government, both at the state and federal levels. And that is deliberate. He’s one man who sees things before they happen. Many of these boys also have structures they can use to work for Tinubu if the need be. Tinubu has funded many elections from his pocket just to ensure his boys get to power. He’s planted the seed and it’s growing and yielding fruits. Don’t forget Vice President Yemi Osinbajo, Honourable Minister for Works and Housing Babatunde Fashola, former Governor of Osun State, now Minister of Interior, Ogbeni Rauf Aregbesola, and other key members in Buhari’s government are some of his ‘boys’.

HIS INFLUENCE ON MEDIA

Talk of one Nigerian politician who has a tremendous influence on media, Tinubu is one of the few Nigerians who has influenced the media industry. There is no media outfit that has consistently written negative things about him. Not just in newspapers, but also on Radios and Televisions. We can authoritatively tell you that Tinubu has hundreds of Journalists as friends. He doesn’t joke with them. And some of them have worked for him in the past and some still do. Some of the celebrated Publishers are his friends and he holds them in high esteem and many of them are holding key positions today with his help. One of them is Mr Sunday Dare, who’s Nigeria Minister of sports.

If things are done accordingly, the presidency should be zoned to the South. And it has been claimed that it’s Yoruba’s turn. The Hausa/Fulani has been in power since 2015. 2023 will make their 8 years in power. And this has a lot of advantages on whoever represents Yoruba as a presidential candidate.

HIS INFLUENCE AMONG GOVERNORS

Remember that Tinubu is a top political godfather. During the campaign, he had supported some state governors with funds and federal appointments. A few weeks back when the South West governors had those meetings they suggested that they would present their candidate and it seems no other politician fits the picture than Tinubu. Even when the Ondo State Governor, Arakunrin Akeredolu Aketin spoke to the media a few weeks back, he categorically said they were waiting for their ‘Capo’ to return from the UK. So Whoever they (governors) support for a post has a better chance to emerge a winner.

HIS RELATIONSHIP WITH BUHARI

You can say he has been sidelined in the scheme of things, but he surely has a good relationship with the man he installed back to back. Don’t forget Buhari visited him while he was recuperating in the UK and they had a chat. He (Tinubu) can also walk into Aso-Rock anytime to meet with Mr President if the need arises. This is one of the things he enjoys and would definitely work for him. Aside from the fact that the no1 man is his man, don’t forget that he singlehanded chose Vice President Yemi Osinbajo, to be the deputy of Buhari. These are some of the things he would enjoy as he sets to run for President.

HE HAS A CONNECTION WITH The NORTH

Not many people know Tinubu has a long-existing relationship with the Northerners. He knows many key guys in the North, who run the affairs of things. The likes of Kano governor, Ganduje and the likes are his men.

Tinubu knows some of the guys to talk to in the north when the need for that arises. He is a man with a vision and he has built his political structure to an enviable height.

When you talk about one politician in Nigeria who spends big for elections, it is Jagaban himself.

Let’s take you back to 2015 when the former Lagos Governor, Akinwunmi Ambode ran for gubernatorial elections and former President Ebele Jonathan was also fighting for his second term in office and Lagos was the centre of focus for the ex-president. He released a lot of fund for Jimi Agbaje to counter Asiwaju’s candidate, Ambode. But trust Jagaban himself, he ensured his candidate emerged victorious as he spent hugely to make sure his candidate won Lagos. And when it comes to big companies in Nigeria, Lagos is their abode. These are some of the entities that contribute to Asiwaju’s political projects. What about the bank MDs? They all support him. Naira for Naira, Tinubu would be hard to defeat.

Asiwaju Tinubu’s image is very enviable. He is one of the few men who have unblemished records. He doesn’t have any fraud allegation hanging on his neck, unlike many other politicians who have run for that post in the past. A lot of people have alleged that he has many companies but they are all in Nigeria to provide employment. He is a philanthropist and a man who derives pleasure in homemade products. These will definitely play a significant role to boost his ambition.

HIS GOOD RELATIONSHIP WITH NATIONAL ASSEMBLY

Tinubu is one of the few politicians in the history of Nigeria who have an influence on the two leaders of the National Assembly. The Nigerian Senate President, Ahmed Lawan, who many believe is a longtime friend of Asiwaju, even before he emerged Senate President.

In the House of Representatives, Hon. Femi Gbajabiamila is the Speaker and it’s also believed he has a strong relationship with Asiwaju. These two guys have a huge influence on the decision making process in the country. Aside from these two leaders in the National Assembly, he (Tinubu) also has many lawmakers who are members in the House of Reps and Senate who are also loyal to him.

SOUTH WOULD PREFER HIM TO ANY NORTHERNER

A lot has been happening in Nigeria, especially the security aspect and it’s been alleged many of these atrocities are being committed by armed Fulani herdsmen. Many people believe they are more active because the No1 man is also a Fulani. An average Igbo man believes his life is more secured in the hands of Yoruba than any Fulani. He might not be their favourite but the Igbo might not have a choice.

Let’s tell you more about Tinubu who left the AD many years ago to form the AC, later ACN, and Afenifere, Obasanjo could not unseat him. He lost two Deputy Governors, Kofo Bucknor and Femi Pedro to the opposition party, Lost Obanikoro, a man he single-handedly made a senator to PDP. He also lost Jimi Agbaje a close ally, also to the PDP. They tried to unseat him, they failed. Obasanjo and GEJ tried, they didn’t succeed. Lagos State had the Minister of Works, Ogunlewe,

PDP BOT Chairman – Chief Bode George, Minister for Defence – Obanikoro, Olusegun Aganga – Trade and Investment, at the time but while these notable men go to bed at night, Jagaban stays awake scheming and planning his next move at Bourdillon, rallying the grassroots and usually, he comes up with either a stick or a carrot.

Obanikoro his sworn political enemy is back, Pedro is back, Salvador former PDP Chairman, is back to his camp.

He has successfully built a battalion of loyalists from 1999 to date. From Fashola to the councillor in the smallest ward in Lagos. Fashola, Osinbajo, Fowler, Lai Mohammed, Ben Akabueze, Ojudu, Ade Ipaye, Rauf, Hamzat,

GOS, Gbajabiamila, Faleke, Yayi, Ashafa, Opeifa, Tunji Bello, Leke Pitan, Jide Idris, Dele Alake, Mamora and a whole lot of other young brilliant minds. For every one person he empowered, he got thousands more in return. He identifies the best and uses them to his advantage.