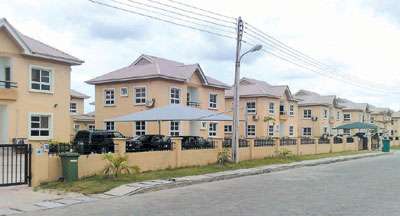 Ibadan, the capital city of Oyo State, is presently enjoying a serious boom in the real estate sector of the state. There has been an impressive turnaround in the sector unlike before. The obvious evidence of this development is how major players in the industry are now coming to Ibadan, to tap into the limitless opportunities the city can offer because the environment is peaceful and quite cheaper to run a business compared to Lagos and Abuja.

Though most of them have their offices in those aforementioned places but the land seems to be greener in Ibadan; there are so many lands and new areas to develop. That was the potential the likes of Alhaji Tunde Ologburo’s Quikborn Nig. Ltd; Otunba Olumide Oshunshina and his Megamund Nig. Ltd (Carton Gate Estates) and few others saw long before now to have hugely invested in Ibadan real estate sector. Before Adron Homes & Properties and others lately joined the fray, they have all contributed to the development of that sector in building serene, classy estates with irresistible amenities which can be bought at reasonable prices, depending on one’s level and taste. This is in addition to the existing Government Reser ved Areas/Estates and privately owned estates.

We also have other developers in Ibadan apart from the popular ones that are doing wonderfully well in the industry too.  Out of these estates however, there are some that are very popular. Those that you don’t have to live in Ibadan to reckon with.

While some of them are old estates built by the government, some are newly developed estates with master piece architectural designs. But guess what? Some of these estates don’t come cheap, they are exclusively for the super rich and influential personalities. In this special report however, City People Correspondent, Dare Adeniran presents to you 10 most popular estates where the rich live in Ibadan and why they are the most talked about. Read on.

The total turnaround story of Oke-Agala Estate located at the notorious Igbo-Agala Yemetu area of Ibadan which used to serve as hideout of hoodlums, ritualists and men of the underworld, is quite an interesting one. Now it has been fully developed and a plot of land is sold there as high as over 20 million naira. It is a well structured estate with good road network and several amenities.

This is one of the few government reserved areas where the rich and powerful celebrities live in Ibadan. It is highly exclusive for people who can afford it. This is where we have Nigeria Customs Service, Federal Secretariat, National Health Insurance Scheme (NHIS) and others.

Iyaganku G.R.A is exclusive for super rich and powerful people. It is a residential neighbourhood with breathtaking structures. This is where the likes of Chief Kola Daisi, Chief Bayo Adelabu, Senator Folarin and many influential people live in Ibadan. Glo Chairman, Chief Mike Adenuga also has his home (Gold Digger’s Place) within the estate. Many expertrates also live there. In fact, Iyaganku G.R.A is called billionaire G.R.A in Ibadan, with high tech infra structural facilities including a fully armed neighbourhood police station.

It won’t be out of line to describe Alalubo as Magodo of Ibadan. The estate is famous for being a place for the classy people. The selling point of the place, apart from the beautiful landscape, is the fact that it has large coverage areas, which now house many privately-owned estates, thereby making properties in this area a hot cake, as a plot of land is sold as high as 25 million naira, while landed property with structure goes for 35 to 40 million naira.

This is another fast developing estate near Akobo/General Gas axis. Though it was abandoned for many years but the estate has bounced back and it has since become developers’ favourite construction site, due to its location and space. Both land and developed property have turned gold here. Selling point of the estate however is the fact that its main road leads back to Dizzengolf, along Iwo-road. A plot land with C of O Title in this estate can’t be sold for less than 12 million naira.

When the former Governor of Oyo State, Otunba Adebayo Alao-Akala, proposed to convert the then abandoned Samonda local airport to a housing estate, many came against the idea but today the place has risen to become one of the most expensive and fast growing estates in Ibadan. At the initial stage, a plot of land was sold for about 3 million. But now the same land goes for between 15, 17 and 30 million, depending on location and sizes. Aerodrome GRA is a hot cake due to its location; it is on a well tarred major road, along Ojo Express road and a few metres away from the University of Ibadan. Privately owned estates are also springing up within the estate almost everyday.

This is another government-owned estate in Ibadan and its existence is dated back to the colonial era. But now many new structures are springing up every now and then. In fact, Odua group, in partnership with a privately owned real estate company, recently constructed two beautiful estates within the estate.

Though it is a mixture of rich individuals living in Onireke GRA but the estate is known to be populated by Lebanese in Ibadan and that has been the case for a very long time now, perhaps because of its closeness to Dugbe (Central Business District) where most of their companies/businesses are located. It is a  fully developed high brow/low density residential hub. Land or property here is quite expensive too.

Apart from being a residential estate for the powerful people, Agodi GRA prides itself as a clean and serene environment. In fact, it could be best described as the seat and home of power. This is where the Oyo State Secretariat, Governor’s office and house, the Deputy Governor’s house and the First Lady’s office, Army Officers Mess are all located. It also has the prominent Justice Wale Babalakin crescent where a plot of land goes for 50 million and above.

Bodija is one of the oldest and most popular estates in Ibadan. It has old and new sides mostly with old structures, especially the old Bodija side. New Bodija is an improved phase of the the estate with mind-blowing structures. What however can’t be taken away from the estate is the fact that it is a peaceful, cool area for some highly placed people in the society. Bodija is fully occupied and one can hardly get free land except for the very few transfers from old owners. A property here costs nothing less than 25 to 30 million naira.

This estate is no doubt one of the biggest in Ibadan; it has many phases within it. There is General Gas, Akala Way and other privately developed estates within it. Here you see master piece structures just like the other high tech estates around and property/land doesn’t come cheap there. A plot of land goes for 20 million naira and above, depending on the part of the estate. Akobo, especially the Akala Way, started enjoying massive boom when ex-Gov. Adebayo Alao Akala upgraded the road that links Kute, Olorunda back to Akobo-Ojurin. Hence the raod was named “Akala Way”. Akobo has also become real estate investors’ favourite site as it now houses many privately developed estates.