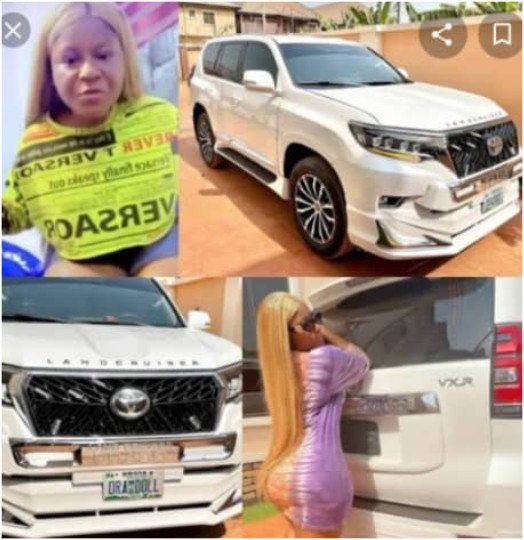 The last 6 months have been highly competitive in the movie industry. As most of our A-list stars have been acquiring exotic cars and new houses almost on a weekly basis.

The rate at which they have been acquiring these items of property is so high that many fans have started asking questions. If truly acting is giving these stars so much money, why then that only these actresses are acquiring houses and buying exotic cars.

Popular music star, Ruggedman, was among the people who question the actress’s achievements lately. In his post on Instagram: “Only women in Nollywood industry own and buy exotic cars, while the men live like second class citizens”.

And star actress was quick to answer him.

According to her, many actresses make much money enough for them to afford the lifestyle they portray as many of them charge millions to feature in movies. Also, he said that she could mention several men in the industry who are paid in millions as well but they have chosen to live a low-key lifestyle and not post their luxuries on social media. He advised that people should stop attributing every woman’s success to her sexual prowess, adding that they work really hard to afford the lifestyle that they live.

The question still remains that many don’t believe movies pay that much and most of these ladies have other means of income. Most especially the Yoruba movie industry where they invest so much in producing movies and sell in peanuts at the end of the day.

In the last few months, it’s been highly competitive among actresses in the industry. Though such competition has been the norm in the industry for stars especially to showcase their wealth and achievements on social media, however, the level of competition in the past 6 months has been different.

It all started with the queen of TikTok Iyabo Ojo who acquired a mansion in Lekki (Megamond Estate). The house, according to a source, is worth many millions.  Then the interior decoration of the house also worths several million.

Many were surprised that a movie actress could acquire such a beautiful mansion and also go so far to spend so much on the interior.

As if that was not enough, a few months later, her goddaughter, Ololade Abuta, surprised her with a white Range Rover, en vogue, adding to the exotic cars already in her car garage.

Business woman-cum actress, Lizzy Anjorin also added a black G Wagon to her fleet of cars. Though, she didn’t make so much noise about it. Her fans took to her page to congratulate her.

Sexy and curvy mother of two, Biodun Okeowo, popularly known as “Omobutty” got 2 cars on her birthday. According to her, she paid for a car last year December precisely, then completed a balance of the payment in January 2021, waiting for the car to be delivered to her.

She got an extra car as a gift, making it two cars to celebrate her birthday.

Also, Sophia Williams, ex-wife of a popular film producer, Tchidi Chikere, in January 2021 got a Benz gift from a mystery person as a birthday gift. A Mercedes Benz SUV a 2016 model, which according to a source, is worth N23 to N43 million.

Ogunro Kudirat Morenikeji, who is popularly known as Kudi Alagbo is an actress-cum-herbal medicine seller and also, she is the CEO of Shenny Hair, a female hair store. She also acquired Acura Jeep RDX, which according to the source is worth N18-19 million. She trained under Fespris Academy under Iyabo Ojo and graduated in 2015 and started featuring in movies.

Regina Daniels is not left out of the show. She is always on the news for acquiring exotic cars and properties and just in January, the young mother of one got a Prado Jeep worth N15 million as a birthday gift for her mum, Rita Daniels.

Also, Destiny Etiko, the very curvy and sexy actress was given a Land Cruiser Prado Jeep in February, which caused a lot of drama on social media.

It was revealed that a married man bought her the Jeep, and the beautiful actress has denied the allegation. She said she bought the Jeep with her hard-earned money, adding that she doesn’t have any connection with the man in question.

Just a few weeks ago, it was reported that hair guru Mummy Glee surprised her brand ambassador, Mercy Aigbe with Range Rover HSK as a birthday gift worth N30 million.

The said Range Rover SUV is equipped with the best-in-class interior features, powerful engine performance, and everything else in between to ensure a safe and smooth ride.

Indeed the competition has been tough and the bar has been raised so high for others to follow. Now with the situation in the industry, many actresses definitely will be unveiling bigger things this year.