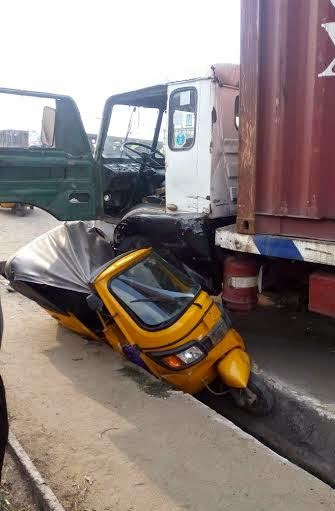 Michael, a 13-year-old Senior Secondary School pupil of the Suncity College, Magboro, Ogun State, has been killed in a crash involving a truck and a tricycle conveying the boy.

The incident reportedly happened around 4 pm on Tuesday at the Magboro bus stop, while Michael was returning from school.

The teenager lived with his mother, Temi Odejimi, on Oke-Afa Road, Ilupeju area of Magboro, while his father is said to be based abroad.

This is just as protesting neighbours urged the police to rid the spot of touts popularly known as agberos, who caused the crash.

PUNCH Metro learnt that some thugs at the bus stop had flagged down the truck driver to demand N100 from him.

When the driver refused to stop, one of the thugs reportedly jumped onto the driver’s side and started dragging the steering wheel with him.

It was gathered that the truck swerved in the process and hit the tricycle conveying Michael and one other pupil.

The impact was said to have thrown the occupants out of the tricycle and the truck reportedly ran over Michael, who died on the spot.

Neighbours of the deceased pupil thronged the head office of Punch Nigeria Limited in Magboro on Wednesday to protest against what they described as reckless deaths caused by the miscreants.

They held placards with inscriptions such as: ‘Enough! Touts (sic), stop killing our children over N50/N100 at the bus stop’; ‘Enough! Agbero people, stop dragging steering (wheel) with drivers at Magboro’.

The protesters, who were mostly mothers, called on the government to stop the activities of miscreants in the area, claiming that their actions had brought sorrow to many families.

One of the protesters, Mrs Remi Okoeguale, said Michael’s death was an irreparable loss to his family.

She stated, “The boy would have been 14 on April 5, 2019, and he was the only child of his mother. His father is based abroad. He was in SS2 at the Suncity College. When he was returning from the school on Tuesday, he boarded a tricycle. On getting to Magboro bus stop, the agberos were fighting with a truck driver over N100, which the driver did not want to pay.

“They dragged the steering wheel with him and he lost control of the vehicle. The truck hit the tricycle and the boy fell down. The truck then crushed him and he died on the spot. We don’t want agberos in Magboro again. They have been causing lots of reckless deaths. The state of the boy’s mother is very pathetic now. She went into a coma after the news was broken to her.”

Okeguale said the touts fled the scene after the accident, adding that policemen from the Ibafo Division came to remove the truck.

When contacted on the telephone, the Ogun State Police Public Relations Officer, DSP Abimbola Oyeyemi, confirmed the accident and said the hoodlum, who dragged the steering wheel with the truck driver, had been arrested.

﻿How My Ability To Speak Pidgin Helped My Career – Popular OAP, GODWIN ARUWAYO﻿