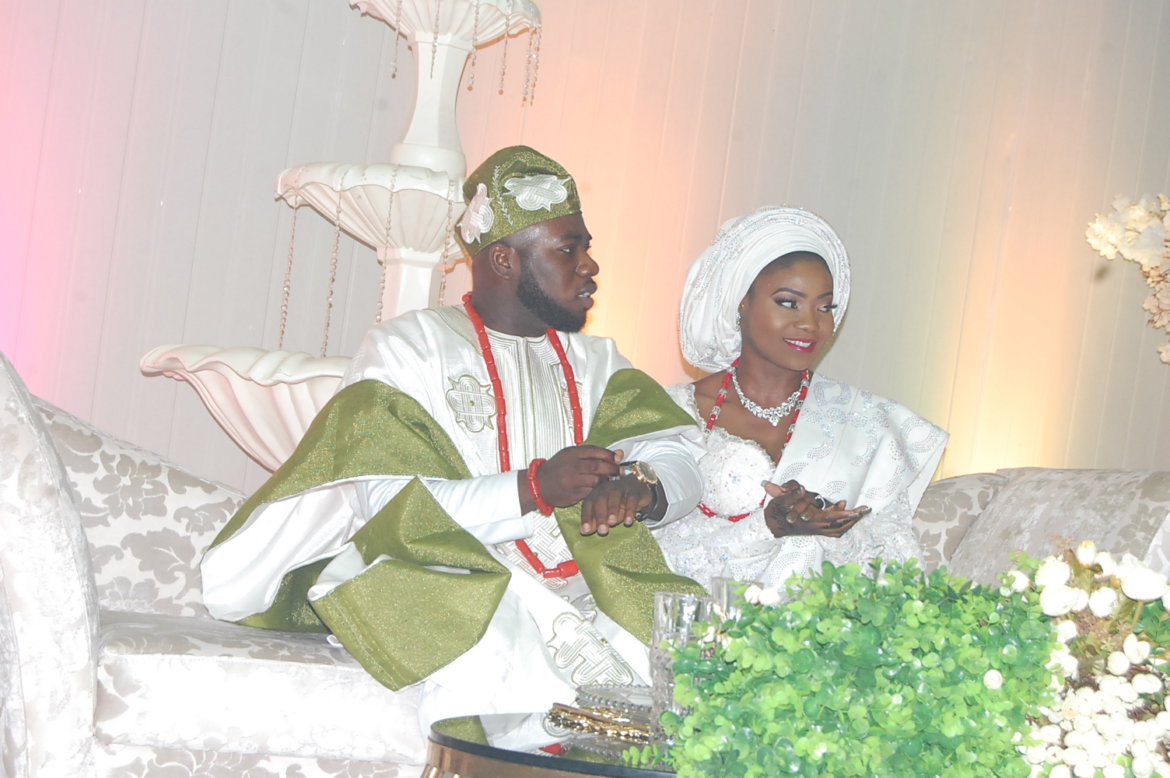 •Details Of The LAGOS End Of The Wedding
As you read this, the family of Mr. Bisi Onasanya, the ex-MD of 1st Bank and his lovely wife are preparing to return back to Lagos, after the classy wedding of their son in Dubai. This came shortly after the successful Lagos end of the wedding.
It was total lock-down on Saturday, 31st March, 2018, at the magnificent Landmark Event Centre, Victoria Island, Lagos, as the First Bank’s former MD and Property Developer, Bisi Onasanya, threw one of the most expensive and classy weddings of 2018 for his look- alike son, Damilola Tolulope Onasanya.

Class, elegance, these are two of the words to describe the traditional wedding that took place between Kemi Lawal and Dami Onasanya, as the event was well attended by dignitaries, creme-de-la-creme in the society and other well meaning Nigerians.

The presence of well armed anti-riot policemen at the entrance of the venue gave the clue to the caliber of people to be expected.

The traditional wedding between Oluwakemi Lawal (Bride) and Damilola Onasanya (Groom) started at 2:30. The first task of the day was the proper introduction; and it was done between the groom’s parents and bride’s. Shortly after, the groom was asked to meet his new parents; the parents of his new wife, Chief Razak Tunde Lawal and his wife, Mrs. Florence Irowa Lawal. The gesture was appreciated as they both embraced him. Chief Razak Lawal is from Offa in Kwara State, while his wife is from Benin.

WHAT YOU DON’T KNOW ABOUT THE GROOM’S PARENTS, MR. BISI ONASANYA & WIFE
Mr. Bisi Onasanya is the First Bank’s former MD. Now, he is into property business. He is the Chairman/MD of The Address Homes; a reputable property development company in Lagos. Mr. Bisi Onasanya is from Ibefun, Ogun State, while the mother of the groom, Mrs. Helen Olufunke Onasanya, is from Osogbo, Osun State. They were both dressed in an expensive Aso-Ebi for the event.

MR. DIMEJI OLATUNJI-AUDU WAS EVERYWHERE
One of the people who contributed to the success of the event is Mr. Dimeji, the General Manager of The Address Homes. He was on ground early to make sure chairs/tables were arranged neatly, and also make sure everything was properly done. He was seen almost everywhere; moving from one table to the other, coordinating and attending to guests.

THE BRIDE’S GIFTS BEAUTIFULLY DECORATED BY BISPAQ LIMITED
They beautifully decorated bride’s gift from the groom (usually) it is designed with a silver and touch of orange colour. This was beautifully put together by Bispaq Limited.

OAKEN EVENT PLANNERS LIVE UP TO REPUTATION
The event planners, Oaken did well to make sure everyone was well attended to. Every part of the hall had one or two representatives of the firm to cater for the need of guests.

SHUGA BAND THRILLS GUESTS
One of the beautiful bands in Nigeria that provide music at corporate events is Shuga Band. He was on the bandstand and he did very well as he serenaded guests with his lovely performance.

OLUWAKEMI LAWAL AND HIS HUSBAND, DAMILOLA ONASANYA DANCE TO EVERY BEAT
Meet the new couple in town! It’s no other than Oluwakemi Lawal and his amiable husband, Damilola Onasanya. One thing that was noticed between them on that day was how Kemi and Dami smiled and cuddled. It was obvious they both complement each other. They were severally called on stage to dance. One of the memorable moments was when they both danced to the lovely songs by WC, a fast-rising hip- hop star.

OONI OF IFE AND OBA AKIOLU RECONCILE SHOW AMITY
It was another weekend to be remembered! As two Yoruba (powerful) Kings, who have been at loggerheads for a while were seen together talking and cracking jokes.

Let’s gist you how it all happened! When Ooni of Ife, His Royal Majesty, Oba Enitan Adeyeye Ogunwusi, arrived the venue, Oba of Lagos was not on seat. Ooni was one of the guests of honour and later joined others at the reception. Few minutes into the reception, Oba of Lagos, Rilwan Akiolu, arrived along with his entourage. So, when Oba of Lagos was about leaving the venue, he walked down to Ooni’s table and they both exchanged pleasantries and news media photographers were allowed to take photos, while the traditional rulers chatted away. It lasted for about 3 minutes before they parted and Ooni told him they would see again.

One of the Lagos Kings whose presence commanded respect at the event is Oba Saheed Ademola Elegushhi; He was seen with Ooni of Ife chatting all through the event. He came with his beautiful wife, Oloori Sekinat Aramide

ABIMBOLA AKINWUNMI (ILE-OKO-YA) AND BISOLA BAMIDELE, A.K.A. ALAGA IYAWO HANDLE THE WEDDING
These two women are popularly known for what they do. Mrs. Abimbola, popularly known as Ile-Oko Ya has paid her dues in the industry and she is one of the best hands in that industry. Also her counterpart, Mrs. Bisola Bamidele, who is also well known stood for the groom family. They both gave their best and that added glamour to the event.

OLANREWAJU, THE MC, Adds colour
Talk of a master of ceremony who has carved a big niche for himself he is Olanrewaju. He gave a good account of himself, as he ensured dignitaries were well entertained and thrilled.
Also was QC. He serenaded the newly wed with his guitar, while the wave-make hip-hop artiste, WC, entertained Kemi and Dami.