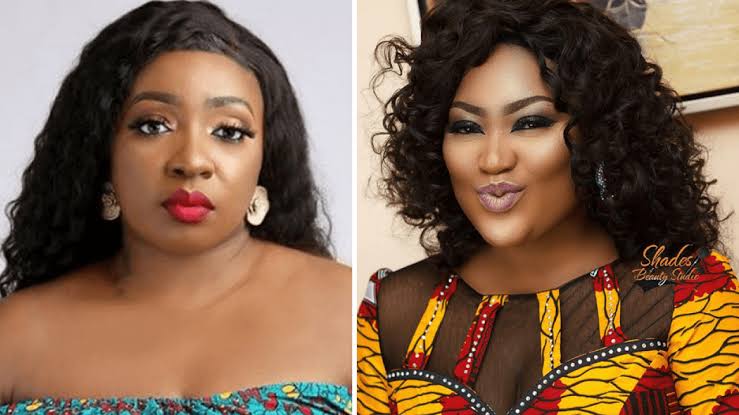 City People Reveals Why They Quarrelled

Earth let lose a few days ago when beautiful actress cum singer, Anita Joseph called her best friend of over 10 years Uche Elendu on a video, she shared on her page. According to Anita, her best friend Uche was upset with her for modeling another hair brand. She accused her friend of being a bad person. She also explained how she always patronises her hair, worth millions, advertise for her even though she is not her brand ambassador, but when Uche realised she was advertising for other hair brands who paid her to do so, she got angry saying “people will think my own hair is fake”.

This led to a big fight between the two and according to Anita, she did the video to explain things to people who have been asking her questions about their relationship. Anita also alleged that Uche has issues with many people around her and recalled telling Uche not to wish her a happy birthday because her birthday message will be filled with lies.

Though actress Uche Elendu has kept mute over the misunderstanding. Star actress, Tonto Dikeh who was unhappy about the fight tried to make peace between the two. According to her message to Anita “Babe you no do anything wrong but for you to bring this come here na fuck up. You and Uche na sisters, this na room and parlour discussion, you be my girl and I got tell you the truth, don’t ever let stranger judge case for true friendship, this is plain mess up friendship hard oo, I mean true friendship.”

“Also if Uche wanted more, she should have signed you but my problem is that this video is a total disrespect to your over 10 years relationship”.

“You do this one for my head I no fit forgive you (not the singing but this public humiliation. Love you girl but you are wrong for this video and hell, Uche is wrong too but that is friendship and healthy jealousy must enter”.

Anita was quick to explain the reason behind her anger to Tonto Dike. According to her “babe,  I get you, friendship is hard. When you get a good one then you are blessed, this one is total bullshit. My gee, you can’t even take half of what I took, I swear, she really messed up and she has really said a lot, so let me clear it. She also threatened me at due time, I will post that.

These two beautiful actresses have maintained a very cordial relationship for years, and often step out at parties and events together, and they always support each other especially through videos, share on social media. Their bond was like one made in heaven until the recent fight between the one.

Anita is not just an actress, but a dancer, singer and philanthropist. She hails from Anambra State. She joined the movie industry in 2005, and in 2006 she rose to fame after acting in the movie titled “Tears In My Eyes”, she has since featured in over 100 movies and still counting.

Uche Elendu is an actress, singer, scriptwriter and a businesswoman, Uche joined the movie industry in 2001 and released her first movie titled “Fear Of The Unknown”. The movie gave her recognition and paved the way for her success in the movie industry. Uche has featured in lots of blockbuster movies such as “Ada Mbano” which has also earned her several awards.

She is currently the CEO of Lendyhair and Killercurves Beauty Store.

Why It’s Tough Hitting It Big As...