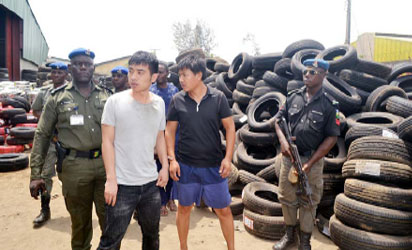 The Chinese company, Sino Nigeria Import and Export Limited’s warehouse, located in Lagos was also sealed up by Standards Organisation of Nigeria (SON).

The Nation also reports that the Director-General of SON Osita Aboloma, who showed reporters round the warehouse at Alakija area on Badagry Road in Lagos at the weekend, lamented that the importation of such tyres endangered the lives of millions of Nigerians.

Aboloma said many of the over three million tyres brought into the country in over 60 containers, had post-dated manufacturing dates –some of them with March 2017 date on them.

“Many of the tyres arrived in Nigeria stuffed into one another. In some instances as many as five stuffed into one. Many are bent and ruptured and looking weak and slack.

“The SON Directorate of Compliance intercepted one of their trucks on the highway, tracked it and then this. You can see the amount of danger that these people are posing to our people and our economy just because they want to make huge profit at the expense of the lives of Nigerians.

“Nothing can be recouped from such stuffed in tyres, no need to test anything because the tyres have already been destroyed on arrival.

“The nation’s laws must be made to work by ensuring that it is implemented to the letter. l must reiterate here that the full force of the SON Act that empowers her to prosecute offenders will be invoked on the perpetrators of this economic crime in no short time. It is left to imagine the number of lives that would have been lost to this wicked act by a few people.”

Meanwhile, Securities and Exchange Commission (SEC) said it has sealed up the premises of a Chinese firm called Yuan Dung for unacceptable investment operations in the country.