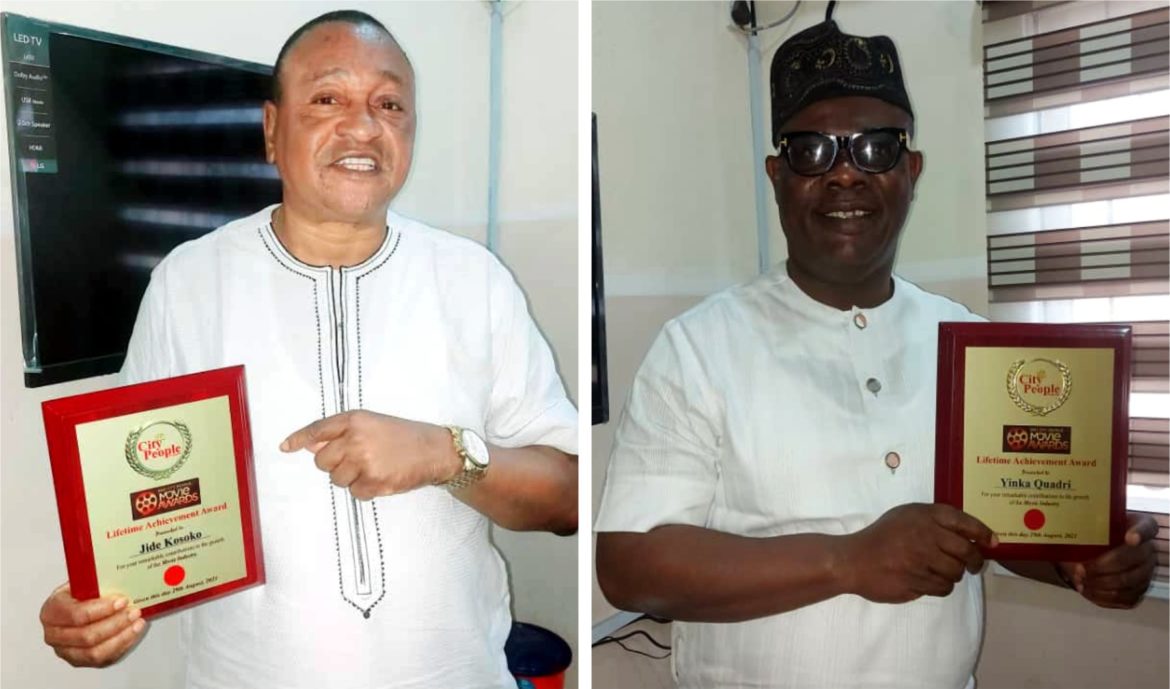 At the just concluded City People Movie Awards in Abeokuta, Prince Jide Kosoko & Alhaji Yinka Quadri were 2 veteran actors/movie producers were honoured. But both of them couldn’t make it to the event. City People Publisher, SEYE KEHINDE and SUNDAY ADIGUN visited the two of them in Ikorodu, Lagos last week to give them their plaques after which both did a joint interview on their careers and the state of the industry today.

Let me start by asking you how you feel as the elders of the movie industry?

Yinka Quadri – It’s good to be an elder because in this life we always pray to age gracefully. And when you attain that stage you need no one to tell you that. You need to move closer to God. You need wisdom always to behave like an elder. You need the wisdom to manage the people under you. You need wisdom to settle things amicably, just to make sure everything is going on smoothly.

Jide Kosoko – First and foremost I thank Almighty God for His grace because without Him there is absolutely nothing one can do. Yes, I feel great attaining this age but most importantly, I am so happy that one is still relevant in his chosen career. It is the grace of God. It is not everybody that has such grace. Happy to still be one of the shining lights in the industry.

At this age, I am still one of the most sought-after, both in the Yoruba and English. I give God all the glory. As for our responsibility as a leader or an elder, as one of the pioneers of the industry. One goes the way of trying to enlighten the young ones and how best to do it. We know what it takes to be able to sustain credibility and continue to be relevant in the job we are doing. We continue to give them advise. We are not just elder but also members of the Board of Trustees of the largest artists organisation, that is TAMPAN. We are the founders and we cannot leave the boat for them.

We have to continue to guide them, and we are trying our best to ensure we do that. Most importantly, we continue to tell them to train and continue to train. Training is key in whatever one is doing.

What has been the secret of your relevance?

Just like what I just told you, it’s training, training and training. We never look at ourselves as a champion. And if you want to stay on top there will be need for you to train. In 2015, I was at Olabisi Onabanjo University just for training, and there is room for everybody to understand what they are doing.

Yinka Quadri – And like I said, you need to move closer to God. It is very important. There is nothing you can do or achieve without God.

Has there been a time in your entire career you felt like quitting?

Jide Kosoko –  Like any other profession, challenges come in various ways. Look at me, this is my 57 years in acting. For me to even go into such trade at the tender age of 10, means it was a challenge; the challenge to beat my parents to it. You know in those days, there is no parent that will want their child to go into such trade. It was a big challenge then, a serious one between you and your parent.

Yinka Quadri – Another challenge remains the fact that you don’t have your own freedom. At times, I will feel like going out freely. At times, I always feel like boarding a BRT bus, but you can’t just do that because of the boys, don’t let me call them Area Boys. They are our boss (laughs). As an actor, you don’t have your own privacy, and I consider that a big challenge.

Jide Kosoko – The challenges are numerous. Look at the effort we put in place, to ensure that our industry is regulated, we are still not regulated. We have not fewer than 21 associations and guilds in the industry, which is not the best for us.

Look at when the elders felt that the social media attacks by our children is not good enough. You saw what our interventions caused. There is a lack of discipline, but we will not relent until they have it. In the first place, we come from a Yoruba sector and the culture of respect is domiciled with us in the Yoruba sector. No matter what happens we will continue to advise them. We will continue to educate them, that there is a need for them to be cultured, either you are older or younger, either you are popular or not popular. You must respect one another and respect is reciprocal. The challenges of production too. When social media was coming we were so afraid. We were so afraid that we are going to be in a problem. How are we going to scale through? We were so troubled. But at a point, we discovered that we can actually use it to our own advantage but we said let’s see how it comes and it started coming, and we started using it to our own advantage.

But some people are now using it wrongly and there are still people using it positively. But I want to believe that with continuous explanation people will get to know that we stand to gain a lot with social media. We should not allow a situation when we cannot benefit from it to happen.

I also noticed that you started early?

Yinka Quadri – This is my 43 years in the industry.

At what point did you get the big break in the industry?

Yinka Quadri – It was actually a gradual process for me.

Yinka Quadri – No, you can’t say that. We have some of our people that their fame came very early.

Jide Kosoko – You are mixing two things together. There are training, some people did not attain those training. I started from the stage, stage to television, television to the movie, so you can’t compare that.

Yinka Quadri – It was from stage to cinema before movies.

Jide Kosoko – Now, you understand, so it’s not the same thing. What I am saying is that name or fame don’t come suddenly.

How do you see the English and Yoruba industry? I know that you are relevant in both sectors

Jide Kosoko – As far as I am concerned, professionally, it is the same thing. Language and expression is secondary. I am so happy with the new trend now, in cinemas and Netflix, they don’t even want complete movies from Africa without the local language taking some percentage of it.

Yinka Quadri – What they need now is the mixture of English and Yoruba, even Hausa, Ibo and Pidgin.

It is because of our numerical strength and our inability to actually enforce the ethics of the profession because of the deregulation I was talking about before. But we are working together. We are working on conducts, we are working on so many things to see the possibility of harmonising everybody under one umbrella, all merged together so that we can enforce the ethics of this profession. Without that, moving forward will be a bit difficult. Though some of our people are moving ahead, moving ahead in the sense that, look at King Of Boys and other fantastic productions, look at Ayinla too and some others because to get the best of professionalism involved in your production require a substantial amount of money. That, some people are producing fantastic movies is because they have access to good funding. If you are sensible, and even if you are not in the industry but you have good money you will employ the best of hands to handle your production. It has always been so but in our own case, you have to hustle on your own and when anybody comes to put you through, you will say you own your money.

But we are trying our best to ensure that whoever becomes a member of our association, should abide by the rules and regulations. So that is the kind of regulation we are doing as an association.

How do you see the future of the industry?

Yinka Quadri – Of course, with all that Prince Jide Kosoko has said, definitely, the future is very bright. That is nothing but the truth. It’s only people who do not have eyes that will not know that we are moving forward.

Jide Kosoko – Let me tell you, it is a gradual movement. We started from scratch. We are putting so many things in place to be the best and remain the best.

How best can you describe TAMPAN President, is he living up to expectations?