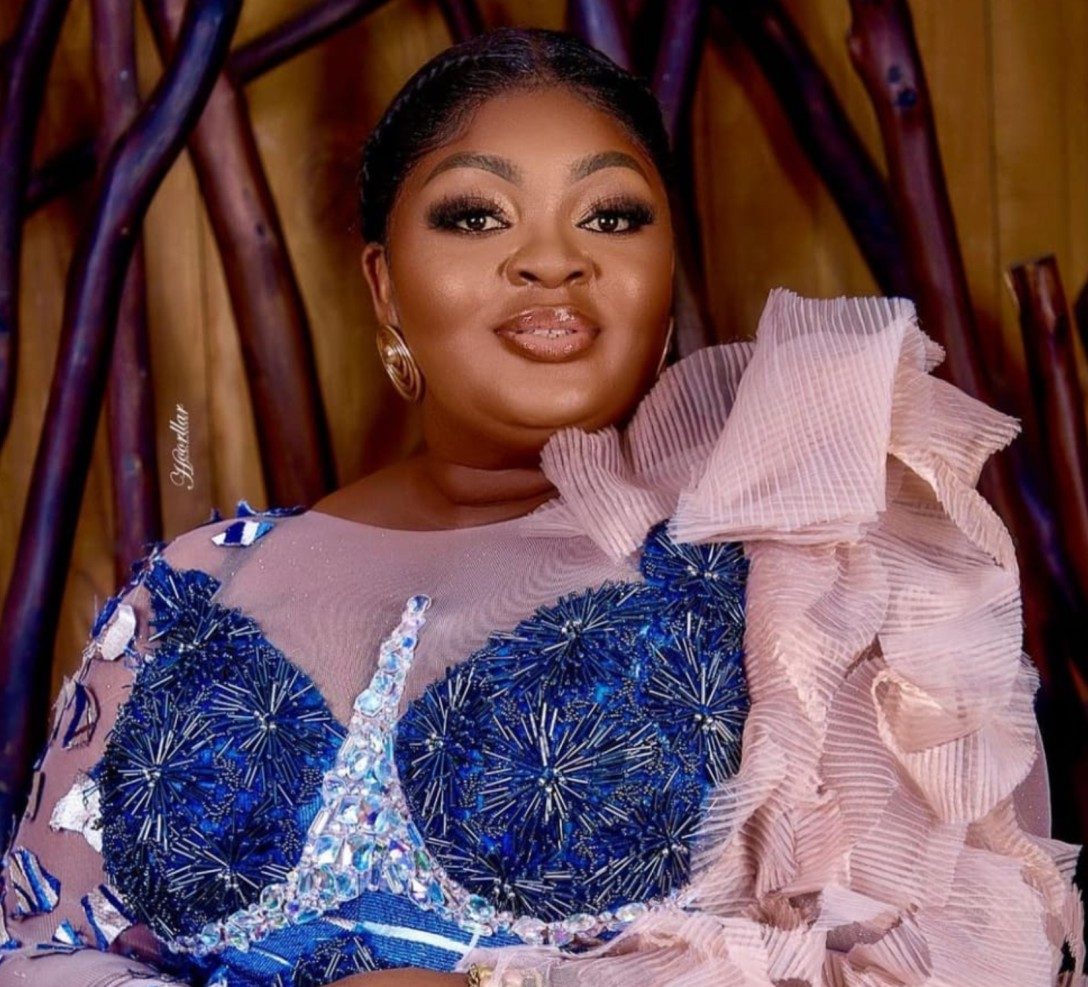 •Reveals How She Lost 33kg In The Last Few Months

Have you seen star actress, Eniola Badmus of late? Have you noticed that she has lost so much weight? For months, she has been on a diet to lose weight. City People met with her a few days back and we were pleasantly surprised at her new, trendy look. She now looks more beautiful than she has ever looked.

We had an appointment to meet with her at the lobby of Radisson Blu Hotel on Isaac John, GRA Ikeja for an interview that evening. We waited to get her to talk about her forthcoming celebration. It’s her 20 years on stage. And she plans to have a book launch on 9th December 2021 in Lagos. It promises to be a classy event that will have K1 de Ultimate and DAVIDO performing. And the Dress Code is to wear the, Best Outfit in Your Closet (Like it’s your birthday).

We sat down over dinner as we chatted with this talented actress who is doing so well in her career. She spoke to City People Publisher, SEYE KEHINDE and the Head of Instagram, SUNDAY ADIGUN for 2 hours about her life & career.

Congratulations on the preparations of your forthcoming event, tell us what it is all about?

To God be the glory, this is my 20th year in the industry. I felt it has been a long journey and I have done so many things with so many challenges and I think I am in a better place. I felt I should bring everyone together with a book talking about my life from my early life to schooling, career, my parents and the challenges I have faced. I am just trying to tell that life is not a bed of roses because the way people see me, it is just too much to what I really am.

How were you able to change in terms of your looks?

How were you able to lose so much weight?

It is not easy. What I can say is it got to a point I could not control what I eat anymore. I eat anything so far it is edible, so from there I knew something fishy was going on. So far I have lost 33kg.

What else has changed about you?

I have other habits but I stopped even the one I thought I could not. I have one terrible habit that I am supposed to have stopped long time ago. This year a lot has changed about me, even I did not see this coming. As the year passed by I decided to change something.

I had a flashback on who I used to be, my procrastination and things that I thought I could not do. I found out when you put your mind towards stuff you are not ready there will always be excuses for that thing not to be done.

At what stage do you think Eniola Badmus is in the movie industry?

Basically, I have more movies on Netflix from this year and the last. I have done so well because everyone in the industry prays that their job speaks for them and that there should be a receipt for whatever they have done. For the fact that I am on that type of platform, I feel elated and the fact that I am being cast for good roles in movies. I featured in Swallow produced by Kunle Afolayan which is on Netflix, I also featured in Omo Ghetto the Saga, which is the biggest in West Africa, it is a plus for me. All of these movies I did prominent and major roles. For me, I might not be there yet but I am better.

How does this make you feel?

Even you as an interviewer know that I have tried. I have bent rules, followed, disobeyed rules and pushed myself in this industry. These are the things I put together to want to celebrate 20 years on stage.

What do you expect at this event?

This event is a party, not a show, I want to party with my friends, colleagues, family and all the people I met during this journey. It is a party I want people to come so I can host them and introduce my book to them.

What is the title of the book?

The title is Walking Through The Edge, it is my autobiography, everything about me right from childhood. What I have been through, what I have learnt and regrets. In the book, I explained a time in 2012 when I had issues with my cousin, we came together without me knowing I was going to be beaten up. I took a picture and still have the picture till date.

Has there been any time you wanted to give up?

There was no time I wanted to give up my career. I was only a bit sceptical, it was 2 years after I started acting my parents did not like that I was acting. I was headstrong and kept on doing what I wanted. I was able to get them to support me before they died. Especially my dad, he was a proud dad that loved everything I was doing because I was able to go to school and still keep up acting.

How do you deal with haters?

That is another big thing, I don’t address because there is no point. I don’t see them even though I know them but I don’t want to give them that light. If you hate me then you have a problem because I can deal with everybody. On social what I think people don’t like about me is my stature so they say different things that have made me strong. With this, there is really nothing that bothers me, I do me and what I want at every point in time.

Whether we like it or not, I am in the limelight and different things will happen and these are the things we know comes with our line of work.

Spending 20 years on stage, what has life taught you?

Firstly, life has taught me that you can be anything if you put your mind to it. Secondly, don’t look down on people. I remember when I started, a whole lot of people looked down on me telling me that I am too fat and all. At some point, I was given only armed robber roles. So with this, I have learnt not to look down on people and to be helpful. Lastly, life has taught me that even if you are the top, biggest, “gbogbo big girl” be humble because you can be there today and it will be someone else tomorrow. That is why I mingle with  Davido, Tiwa Savage, Reekado Banks, Olamide, CDQ and even the younger ones. I am not about being called “Aunty Eniola” just call me Eniola Badmus. Just like my elder brother who is over 60, he does not want to be called Chief, Mr and all of that. I like that, I am not Mrs, Miss just Eniola Badmus.

What are the challenges you faced in your career?

I don’t have a success story yet, I am just moving by the wave and flows. I have other businesses by the side that pay me. Maybe if I was not in limelight, I would have been married with kids. This job has some disadvantages attached to it because the people look at you at first, they look at you as a goddess with so many restrictions. But the advantages are many.

Are there any regrets so far?

Absolutely none, everything I have been doing, I have been growing, there was never a time I came down. Through this job, I have gotten to know a whole lot of people that I know now. I have been able to connect with the high and mighty.

There is no regret whatsoever.

Who is Eniola Badmus?

Eniola is a carefree person, I do not take anything to heart, I can manage anybody because I have been with parents that are like that. I live my life like it ends today. I don’t fight, if you do what I don’t like, we talk, if I don’t want to talk about it, I leave it.

I do find and one thing will lead to one thing that will make us not to be together again. When it comes to relationships, I like to be private. I don’t want people talking about my relationship whether we like it or not most of the people we tend to fall in love with are people who don’t want to be in the limelight. I have people I am into way back and presently.

Is it possible to draw the line between Eniola the now and Eniola the actor?

Aside from my family and relation which are the things I don’t like to bring out, early this year I did something major for my family that is supposed to be out there. But you know social media, no matter the good you do they will still come out to bash you. You can insult me, I can handle it but my family can’t. My family comes first because I know what they do for me too.