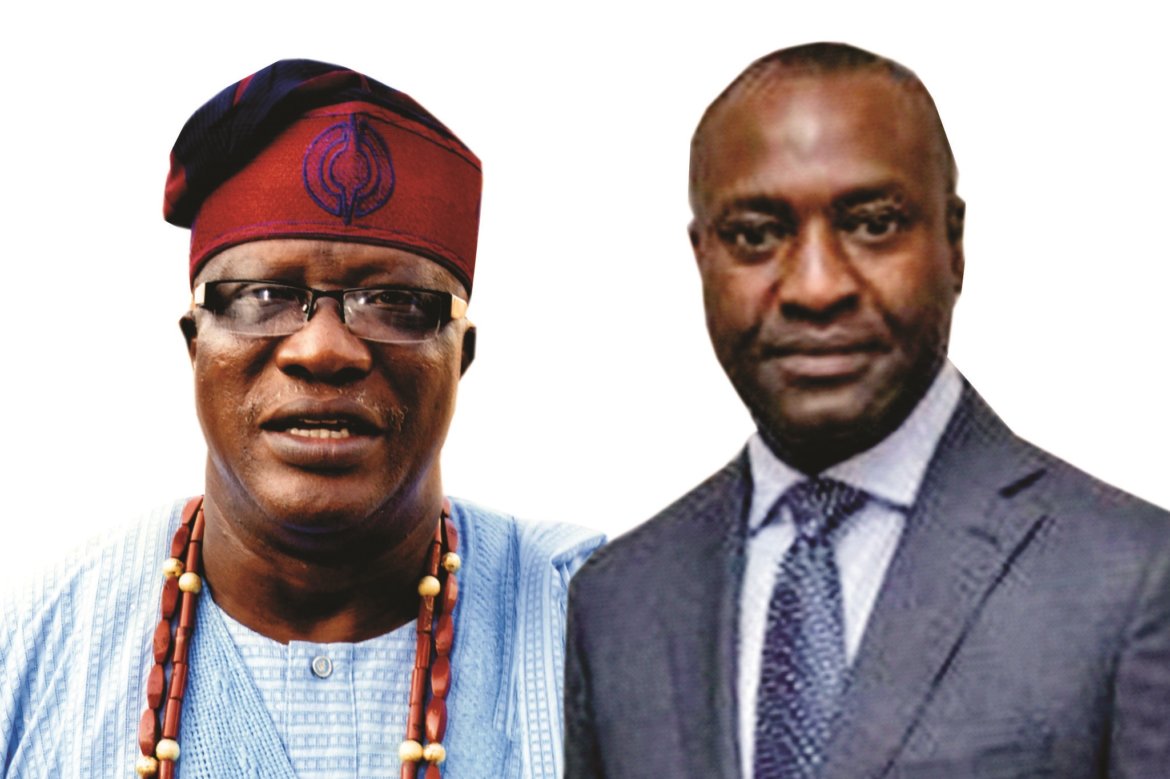 The controversy generated by the sale of a customer’s collateral by Sterling Bank Plc has continued to fester, with more accusations and counter-accusations being levelled by all parties. The accusation by Grant Properties Limited, a property development company, promoted by Olajide Awosedo that Sterling Bank excised 10-hectares from a 50-hectare collateral and illegally sold it to a front company of a very senior director of the bank linked to Yemi Idowu of Aircom Nigeria Limited, the developers of Northern Foreshore Estate, is getting messier by the day.

While a Lagos high court ruled that the collateral was illegally sold, there are allegations that the Asset Management Corporation of Nigeria (AMCON) also fingered in the untidy deal has teamed up with Sterling Bank to undermine the judgment. While AMCON has denied collusion, Sterling Bank said the collateral was not sold to its director. This is however what we know so far.

HOW IT ALL STARTED

According to reports, the business deal started in 2002 when Grant Properties owned by Olajide Awosedo secured a 50-hectare land in Lekki, to build “Victory Park Estate”. He approached Unity Bank, Skye Bank, Wema Bank and Sterling Bank for an N8billion ongoing loan to partly fund the project. Sterling Bank was the leader of the consortium. Grant Properties transferred the shares in its subsidiary, Knight Rook Limited, to the banks as security for the loan.

After Grant Properties had secured the loan and started developing the property, it could not meet up with the repayment obligations. The loan, which Grant Properties took that had gone bad, was transferred to the AMCON in 2011. At the time, the CBN had spent over $6.8 billion of tax payers’ funds purchasing the non-performing loans from failed banks. Grant Properties was informed by the Skye Bank, one of the banks financing the project, that it had assigned its shares in the project loans to AMCON.

The property company then approached AMCON with a proposal to finance the project and repay the loan. AMCON, however, advised the company to wait for other banks to transfer their shares of the loans before entering into  negotiations with the corporation. In handing over the debts to AMCON, Sterling Bank and others were required to transfer all Grant Properties’ collateral to the corporation.

Sterling Bank was expected to transfer, alongside the loan, every part of the land in question to AMCON, but it was alleged that the bank left out 10 hectares, which it had sold to the Real Estate Development (RED) Company, said to be a front for a very Senior Director of the Bank. Olajide Awosedo, chairman of Grant Properties, said in a recent interview with journalists that a non-Executive Director of Sterling Bank had called him “face to face, brought out a survey of 10 hectares of my land and said, ‘Sir, sell this portion of land to me, if you want N10bn from my bank. I will make sure you get it.

I am the chairman of real estate finance of the bank”.He said he refused until AMCON took over the non-performing loan”. They moved my loan to AMCON, but rather than transfer all my collateral with the loan, the bank (Sterling) withheld the 10 hectares its director had his eyes on and sold it to him through a surrogate company owned by the director and his associates,” Awosedo added. He alleged that the director initially sold the land to his front company at N18, 500sqm, amounting to N1.85b for the 10 hectares — a far cry from the market worth of N5 billion, according to him.

Further details of the deal show that about 2.4 hectares from the land was immediately sold to UAC Properties Development Company (UPDC), another property development company owned by UAC Plc, at a higher rate of N26, 000sqm. It was this that became the subject of litigation that ended in favour of Grant Properties. The remaining 7.6 hectares were developed by Aircom Nigeria Limited, an Estate Development Company, which built the “Cardogan Estate”. Curiously, Aircom is owned by Yemi Idowu, the non-Executive Director of the bank, who managed the Grant Properties’ loan before the crisis.

Meanwhile, Grant Properties filed an action at the Lagos high court to challenge the sale of 2.4 hectares of the 10 hectares to UPDC in 2011. Six years after, precisely on June 2, 2017, the court ruled that the land was sold by Sterling Bank after the banks had assigned the company’s loan to AMCON.The court also held that the documents of the sale were signed by Yemi Adeola, Managing Director and Justina Lewa, Company Secretary of Sterling Bank.

The bank, the court ruled, had acted alone as the other banks were not part of the sale.A. J. Bashua, the judge, made an order nullifying the sale of the land. While Grants Properties pursued the case, Yemi Idowu and UPDC had continued developing the land, in defiance of two court orders obtained in 2012 ordering all parties to stop construction activities on the disrupted 10 hectares pending determination of the case.

THE ISSUES AGAINST AMCON

The role of the Asset Management Company of Nigeria, AMCON has come under scrutiny because technically, it owns Knight Rook, the company whose shares served as collateral for the loan to Grant Properties. With a positive court judgment, it means AMCON has enough collateral to settle the loan. After securing a judgment in its favour over the land sold by Sterling Bank, Grant Properties, in June 2017, wrote to AMCON, enclosing a certified copy of the judgment, and a proposal to repay its loan.

The company, in its letter, asked AMCON to value the land and the developments on it, and then take its payment from the property.A day after AMCON received the company’s letter, armed thugs and policemen were allegedly sent by AMCON’s receiver manager, Olaoluwa, allegedly took over the company’s property in a coordinated attack across the premises. In the process, it was alleged, members of staff of the company were beaten.”My children and grandchildren have been rendered homeless,” Awosedo said in a statement. “The eviction of my children from their homes is particularly baffling, given the fact that two of the residences are rented accommodations, which cannot be attached to any debt.”

Ayeye, an AMCON Executive Director, allegedly told Grant Properties that the court judgment in its favour was of no consequence.”The issue of the land was settled as far as AMCON is concerned,” he reportedly said. Ayeye also reportedly revealed that AMCON had taken N501 million from the bank — profits secretly made from the sale of the land — to ratify the title.When Ayeye was reminded that AMCON cannot ratify an illegal act, or refuse to recognise a court judgment, he said Grant Properties should forget about the judgment and the 10 hectares of land.AMCON and Ayeye insisted that Grant Properties must not refer to the judgment, leading to speculation about the neutrality of AMCON.

It had also warned Grant Properties to refrain from making any complaint to the Economic and Financial Crimes Commission (EFCC) or any other law enforcement agency. The land illegally sold by Sterling Bank and the property on it are worth, at least, N30 billion today, according to Grant Properties. This is more than enough to settle the firm’s loan obligations to the corporation, which might have ballooned to about N20 billion when interests and penalties are factored in.

It is not true that 10 hectares of land was sold to Mr. YemiIdowu,” a statement from the bank read.”The 10 hectares was sold to a company known as the Real Estate Development (RED) Company Limited and the decision to sell the 10 hectares was a joint decision among the Consortium of Banks (Wema, Skye, Unity & Sterling) and the Developer (Grant Properties/Chief OlajideAwosedo) as the proceeds of sale was to be used to refund subscribers obligations  of Phase 2 of the project who had become restive, owing to the failure of the developer to commence work on the project( deliver various housing units with deposit from subscribers in excess of N2.1billion).”Sterling Bank could not have singlehanded sold any part of the land as the security was pledged to the banking consortium that financed the project. It is instructive to note that the proceeds of sale of the 10 hectares was passed to Grant Properties/Chief, Awosedo to be transferred to the subscribers who had demanded a refund.”The bank also said that the claim by Grant Properties that a court ruling declared the land sale illegal was also not true.”

It is not true that that the Court pronounced the sale as illegal. The Court Ruling related to only 2.4 hectares out of the 10 hectares, which the RED Company subsequently sold to UAC Property Development Company (UPDC) and it is now subject of an Appeal at the Court of Appeal Lagos,” the statement read.

“The Court did not void the sale of the 10 hectares to RED Company and there is no Order of Court that the 10 hectares be returned to the Grant Properties.”On what happens to the proceeds from the sales, Sterling Bank said: “The said proceeds were passed to Grant Properties/Chief, Awosedo to be transferred to settle subscribers to a housing project it halted before the AMCON take-over of the bad loan incurred from the Banks/Grant Properties transaction.

Grant Properties has  since written petitions to the Police, EFCC and the CBN Governor, accusing the Asset Management Corporation of Nigeria (AMCON) and Sterling Bank of illegal sale of portions of Victory Park Estate, belonging to an indigenous real estate development company, Grant Properties Limited (GPL).

In a petition addressed to the Lagos State Commissioner of Police, Mr Imohimi D. Edgar, on November 8, 2017, Olajide-Awosedo explained that the residue of the loan was transferred to AMCON in 2011, owing to liquidity problems in the banks. The petition, which was acknowledged by the Police boss, read in part; “At the time they sold the debt to AMCON, the banks were required to transfer all of our collateral; however, we found out that Sterling Bank secretly withheld 10 hectares of our land, which it illegally sold to one of its Directors, Mr. Yemi Idowu, a rival real estate developer, who the bank had appointed to manage the account. Prior to his appointment to manage the account, he had made an attempt to buy the land for a price below the market value, but we had refused to sell.

Later, he secretly bought the land from his bank, Mr Yemi Idowu sold a quarter of it (2.4 hectares) to UPDC Plc for a substantial secret profit. Both UPDC and Mr Idowu commenced construction immediately.”It also accused AMCON of forceful eviction of its clients and captivity of a mother and her child, as well as a worker. A copy of the Lagos State High Court judgement also shows that the court nullified the sale of the land on June 2, 2017. Dr. Awosedo had earlier written the Central Bank of Nigeria (CBN) Governor, Mr Godwin Emefiele, on September 28, 2017, detailing what it termed “insider abuse, collusion and fraud” against his company by AMCON and Sterling Bank.