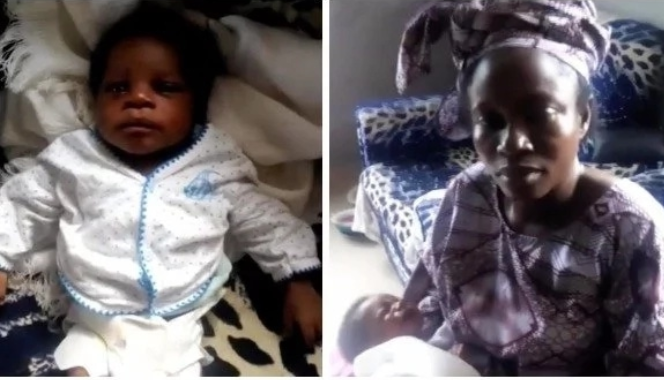 Two months back,  precisely August 28, 2017, the home of Mr. Olusola Ajayi and Mrs. Sikiratu Ajayi who reside at Ogunajobo area of Shagari Village in Akure, Ondo State capital have turned to a small Mecca for many celebrities in and outside Ondo State, while some traveled from as far as Abuja, Port Harcourt, Lagos and other states to Akure for their quick healing from the 2 month old baby boy, Daddy Samuel,  as fondly called. As at today, Daddy Samuel is the youngest prophet in Nigeria and globally due to the circumstances surrounding his birth and the fact that he spoke twice when he was two weeks old.

Although, he is not the first child to have been born in such a mysterious way. It will be recalled that, a child was born with the Holy Quran in his hand, another was also born with Holy Bible. A baby was born with prayer Rosary on her neck in Niger State and just 3 years ago, little Mahmud Kosija was delivered in Ondo Kingdom with a strange ear-shape, with an Islamic inscription and it was said that the new-born  baby was shouting “Allah” “Allah”’ when he was delivered at the Mother and Child Hospital in Ondo Town.

But the birth of Daddy Samuel was really mysterious, aside the fact that his mother first delivered bunch of fresh leaves before he was born. He was said to have uttered the words “E polongo ogo mi o, e polongo ogo mi o ewe nje o” (meaning that the parents should proclaim his power across the universe and that there is efficacy in herbs) twice when he was a two week old baby and since then he had not utter any other word.

THE BIRTH OF DADDY SAMUEL

Baby Samuel Ajayi, fondly called Daddy Samuel is the fourth child of family of 4. His father is a native of Akure, while his mother is an Egbira from Kogi state. He was born on August 28th, 2017 at the Oke Ijebu comprehensive health center. Until the birth of Daddy Samuel, the Ajayi family had 3 boys and the youngest then was 10 years old. According to  what was gathered , the family relocated to Akure from Lagos State when fending for the family became difficult.

Before he was born on the 28th August, 2017, it was said after labouring for hours the mother first gave birth to a bunch of leaves bonded by a strand of hair and this made the nurse on duty to call for help but as God would have it a baby boy was born at exactly 7am in the morning. Since his birth, he has brought fortune to his family who could not feed on 3 square meals. Following the birth of the wonder baby which has become a household name not only in Ondo state but across the country. It was said that the Akure traditionalists have visited the Ajayi family to confirm the story. While the nurse who took the delivery of the baby confirmed that the mother first gave birth to leaves before the boy was delivered.

A SACHET OF WATER COST 100 NAIRA

Though, the baby has not spoken since they said he spoke but we can reliably tell you that the boy has been performing wonders through his mother, and many believe if he grow up, he will continue his spiritual work. As you read this, not less than 200 people visit the place for consultation on a daily basis. According to the mother, who claimed that his son had transferred healing powers to her, she will now carry the wonder boy in her bossom while attending to miracle seekers in the healing centre.

According to the person who claimed that the first miracle started when the mother put water on the baby’s hand and after few prayers it was given to the pregnant woman who had been pregnant for 3 years and within few hours, she put to bed (twins) of a bouncing baby boy and girl. For those seeking Visa, their passports are placed beside Daddy Samuel’s bed.

As you read, not less than 5 people have been given Visa. Within the last 2 months, the baby has performed a lot of healing and spiritual deliverance for people. It was also said that aside those who first saw the bunch of leaves, the mother has kept the leaves away from people, while she performs the miracle through water. Though when the visits first started, token were paid for consultations but as you read this between 500 to 1000 naira is paid for the consultation fee.

The sachet of water is prayed upon by  both the low and high personalities from across the country that visit the wonder boy for spiritual healing and deliverances.

Top Pastors Disagree On The Issue Of TITHES

No more land grabbers in Lagos, once...