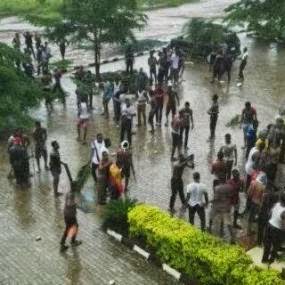 Students of Caleb University, a privately owned university in Lagos State, are currently rampaging within the school premises. The undergraduates went on a rampage after the school’s management introduced new rules which they found ridiculous.

According to the students, one of the new rules prohibits male and female students from hanging out after 7pm. Another rule insists the students must go to the church within the school premises to get a pass before they can leave campus.

They had a faceoff with the school Sheriffs during the riot. Teargas canisters were opened to disperse the students. Some of the students sustained injuries during the faceoff.

Two students were reportedly shot during the riot.

Watch video clips from the riot below .mp4

2 Students Shot As Caleb University Students protest in Lagos was last modified: May 24th, 2019 by Reporter