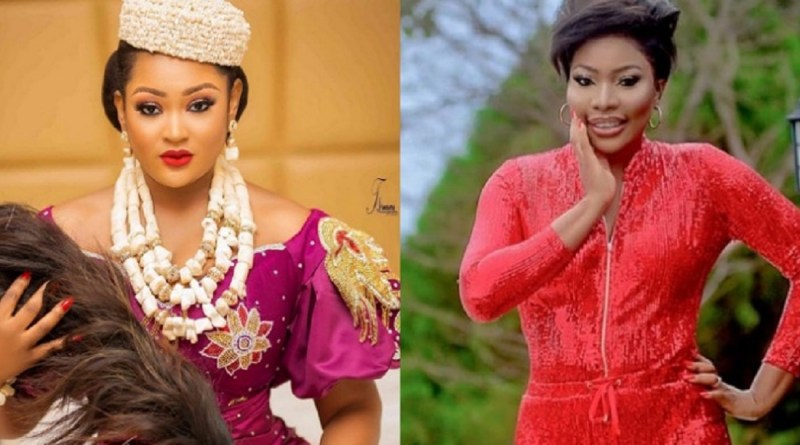 The entertainment industry is usually filled with lots of drama. It is also true that most friendships or relationships don’t last in the movie industry especially among ladies and the beef is often a war of supremacy and sometimes envy and competition among the ‘A-list stars.

In 2020, some of these stars made their beef known to the entire public, while some tacitly fought their wars without any form of drama. Some even went as far as calling one another out on social media.

The one time best friends Seyi Edun and Wunmi Toriola are among the movie stars who parted ways in 2020. Their fight came as a rude shock to many because the 2 were not like friends but sisters and they always had each other’s backing. But last year, they parted ways and Wunmi even called Seyi out on social media for extending their quarrel to her baby by ignoring him on his birthday, a baby she was, before their beef, his godmother. But till date, no one could finger the cause of the beef.

Curvy actress, Biodun Okeowo, and Kayamata Goddess Miwa are two celebrities many noticed, were no longer close, as they were a few years ago. Miwa often referred to Biodun Okeowo as her elder sister they always celebrated each other on social media, but things appeared to have changed even though they are not talking about it. But the two sisters ignored each other on their birthdays. They no longer celebrate each other on their pages or even comment on each other’s pages. And Miwa these days tends to be very close to Toyin Abraham and Sotayo Sobola in the movie industry.

Though these two beautiful ladies have never been friends in the industry. Considering their ages and years of experience in the entertainment industry but they are always at war, calling each other out on social media, but Victoria Inyama has always been a lane minder until the controversial actress, Etinosa, who enjoys airing her views and opinion about things, looked for her trouble and ever since, they have both been at war. They don’t waste time in giving each other replies on every post and comment.

They are, no doubt, the most fashionable actresses in the Yoruba movie industry and they tend to maintain a cordial relationship until a few weeks ago when Mercy Aigbe ignored Iyabo Ojo’s birthday and it went viral and popular blogs reported it that they were both at war and they both kept mute about it. The interesting part of their beef is that they have kept their daughters who are friends out of the misunderstanding as Mercy Aighe’s daughter celebrated Iyabo Ojo on her birthday and she responded so beautifully as usual, so there’s an indication, that it’s marely a little misunderstanding that would be sorted out soon.

Fathia Balogun appears not to be in good terms with a few of her colleagues. It all started with her and Iyabo Ojo, which degenerated into lots of social media drama. But that didn’t stop her from mourning with Iyabo Ojo when she lost her mother a few months ago.

It is also a known fact that Fathia Balogun and Kemi Afolabi are not on talking terms. They often avoid each other at parties like plagues.

Then just recently, Fathia Balogun and Remi Surutu also had an issue that almost resulted in a big fight.

Uche Elendu and Doris Ogala, these two beautiful actresses were once one time besties until Doris Ogala accused Uche of trying to snatch her husband during her traditional marriage, where she said Uche used a white handkerchief to wipe her face, which affected her but owing to God’s intervention, she overcame the effect. So she called out Uche Elendu and Oge Okoye for always sleeping with people’s husbands and pimping married women for big boys in town.

Also during the Endsars protest when shops were looted, Uche’s shop on Lekki was one of the shops that were looted, but Doris Ogala called her out for showcasing her landlady’s shop as her personal shop that was looted during the protest, and during the drama, veteran actress, Eucharia Anunobi, took sides with Uche Elendu, and Doris was all out for war, as she even promised to fight her physically when they see one-on-one.

Also, Uche Elendu and Anita Joseph were one-time good friends who had parted ways, even though Uche Elendu has kept mute over the issue up till date.

The very outspoken Anita Joseph called her out on social media over the issue of advertising another hair brand while she sells too, and Anita didn’t take any of that lightly. She said that she bought everything she used from her and that she was not her brand ambassador so she couldn’t stop her from advertising for another brand.