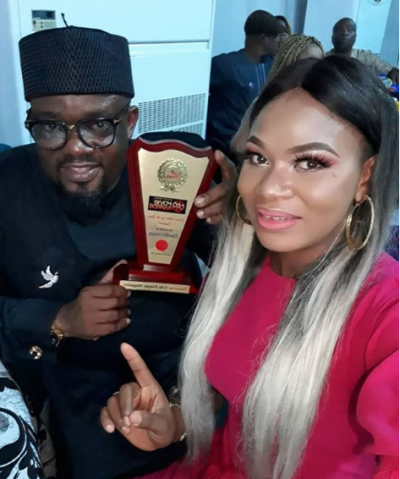 Nigerian actors Olumide Oworu a.k.a “Tari’’ and Charles Inojie known a.k.a “Mr. Lucky’’ in the Television series “The Johnsons’’ joined the league of winners at the 2018 City People’s Movie Awards.

While Oworu won Most Promising Actor of the Year, Inojie won The Best Comic Act of the Year.

The City People Entertainment Awards is an annual accolade presented by City People Magazine to honour Nigerian and Ghanaian Entertainers.

This year’s edition brought together various actors from Nollywood, Gollywood.

Oworu took to his Instagram handle@olumideoworu to thank everyone that voted “To everyone who voted, thank you. Another one!’’.

In 2015, Owori won the Most Promising Actor at the Best of Nollywood Awards and supporting actor for his role in “Soldier Story’’ at the 2016 Africa Magic Viewers Choice Awards (AMVCA).

Similarly, Inojie who is the originator of the slang “Na them dey rush us’’ took to his Instagram handle @charlesinojie to thank God and his fans for the support.

“We took home the comic actor of the year awards at the City People Movie Awards 2018. To God be the glory’’.

Also, fans of the comedian took to social media to congratulate him.

Inojie joined the movie industry in 1999 and is known to always act in comedy movies.

He has featured in several home movies and Television series such as “ The Johnsons’’, “Police Recruit’’, “Love Wahala’’, “Wise Inlaws’’ and many others.