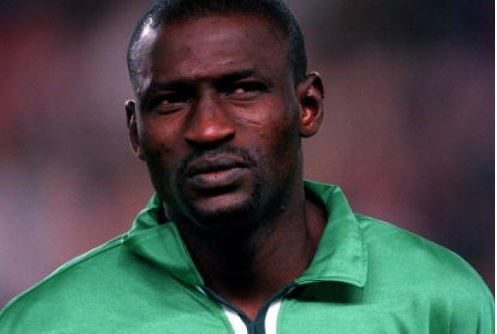 Former Super Eagles’ midfielder, Garba Lawal, has advised the coaching crew of the Super Eagles to leave Lille goalkeeper, Vincent Enyeama out of their plans for the 2018 World Cup in Russia.
While calling on Gernot Rohr to forget players who did not participate in the qualifying series, Lawal said the Super Eagles can make it out of Group D in the World Cup if they are mentally strong.
Lawal who featured for Nigeria at two different World Cups in 1998 & 2002, called on the players to showcase their talents during the tournament.
“Football is all about playing as a team,” Lawal said.
“When it comes to the World Cup, it depends on player’s mental attitude.”
“All the top scouts in the world would be present, so if you are called upon by the coach, try to showcase your talent, because you never can say, you could get yourself a better deal.

“Iceland and Croatia are forces to be reckoned with, the group is not only about Argentina.
“I believe we are going to come out of the group, but it is not going to be an easy one anyway.
“It depends on the player’s mental attitude, Lawal said.
“All the teams that qualified for the world cup are tough, there is no easy country in there.

“When it comes to the world cup, everyone is good and wants to parade her best side.
“You should not think you’ll change the players that qualified and bring another set of players, it is going to be difficult like that.”
“So the coaches should know the key positions that they think they need fresh legs. All the games are going to be very tough.
“Has Enyeama said he wants to come back?
“He has not been in action for a long time, this is the World Cup, it’s been long we saw him in the net, it’s going to be difficult for him.
“I believe we should not rush the gentleman. We just have to let it go and work with what we have.” Lawal advised.
Nigeria are in World Cup Group D alongside Argentina, Iceland and Croatia.
2018 World Cup: Garba Lawal Urges Coach Rohr to Shun Enyeama was last modified: December 8th, 2017 by Arinze Ago