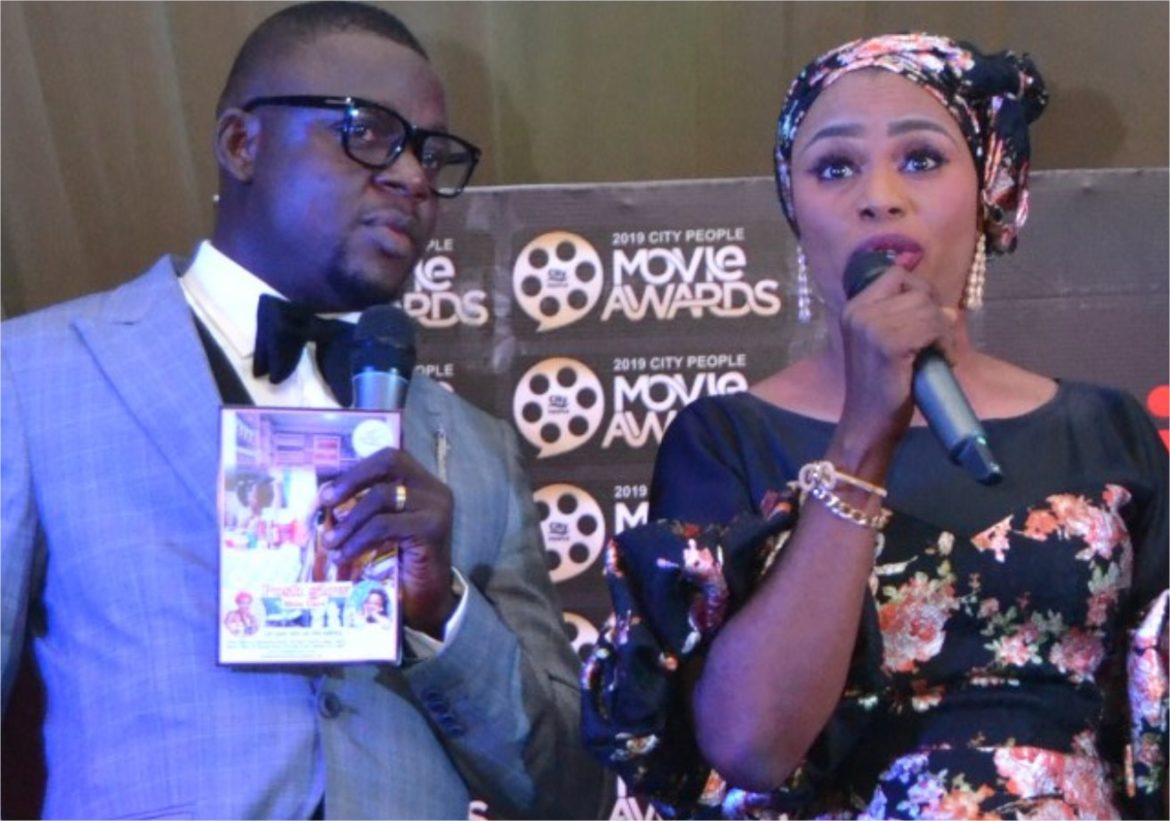 On Sunday 13th October, 2019 City People Magazine held its 2019 City People Movie Awards in Lagos. The event took place at the prestigious event centre called 10 Degrees, on Billings Way, Oregun, Ikeja, Lagos. It was well attended by all the who-is-who in the sector. Over 400 movie stars gathered for the event. This year’s event lived up to its billing, as movie stars came from every part of the country; they trooped in en masse to celebrate each other. There was a big presence of Kannywood stars. The Igbo actors were not lefts out. So also the Yoruba actors. The English were ably represented. The veterans also turned out in large numbers. Below are excerpts of the gists from the awards.

Hajia Nike Nafisat Balogun, popularly known as Ajoke Gbajumo and MC Pluto compered the 2019 City People Movie Award. The two really did a good job of their assignment. The event kicked off with citation of National Anthem. Shortly after the anthem, was the arrival of big guns in the Movie sector like Baba Wande, Iya Ereko, Waidi Ijaduade. Their presence lit up the show, as many of their fans rushed to take pictures with them.

Abeokuta based Hip-Hop Juju singer BoyeBest gets better by the day. He was on the bandstand to entertain guests. This young, but very talented musician did not disappoint, as he made sure everybody had fun at the event. He kept many people dancing.

Kaduna Senator, Shehu Sani, arrived the hall before the event kicked off. He came all the way from Ghana to attend the 2019 Movie Award. And he played many roles. He was the Special Guest of Honour. He presented the first category of awards. He also presented awards to Kannywood winners. It was also Shehu Sani who unveiled City People TV to the audience. A few months back, Senator Florence Ita Giwa formally launched City TV in Lagos.

Chief (Mrs.) Oluwafunmilayo Oyewunmi Esusu, is the Governor of the Lagos Chapter of TAMPAN. She is a top actress that has made her impact felt in the industry. She arrived the hall on time with her team and was called to recieve the first award. She got Movie Veteran Award for her contributions to the movie industry. She is set to host a 3-in-1 party in a few weeks time. It’s her birthday, movie premiere and retirement from the Lagos State Civil Service.

Jummai Joseph is a big Nollywood actress who has over the years distinguished herself in the profession. The well endowed lady also came early. She was honoured for her contributions to the sector. She was honoured with a recognition award for her remarkable contributions to movie sector. She said the award means a lot to her. She said the award would be dedicated to her son who turned 12 on that day.

Veteran actor, Kareem Adepoju, popularly called Baba Wande, is one of the veteran actors in the Yoruba movie sector. He has made a huge impact. The Ti Oluwanile movie producer arrived the venue early. He was dressed in a white attire, matched with red cap. He got Movie veteran award in recognition of his remarkable contributions to the movie sector.

He thank the Management of City People for honouring him and for also recognising other artistes like himself. Some of those who came on stage to with him include: Mama Ereko, Dimeji Ijadunade, and many other tops movie actors/actresses.

Veteran actor, Muyiwa Adegoke a.k.a. Muyiwa Londoner got a recognition award for his remarkable contributions to the movie industry. He is based in Ibadan. This talented actor was very happy to receive The Movie Veteran Award.

One of the most outstanding movie makers, directors and actors in Nollywood is Hon. Desmond Elliot, who also doubles as a Lagos lawmaker. He is a member of the Lagos House of Assembly representing Surulere Constituency. He emerged Best Movie Director of the Year Award (English). According to him he didn’t see it coming. The talented actor and politician looked stylish in his traditional Agbada attire. He urged everyone to help the industry grow, because as he said government alone can’t do it.

PAPALOLO WAS THE 1ST TO ARRIVE

He was the first to arrive the venue. The pencil-slim comedian got everybody smiling on stage as he cracked one of his best jokes. He dedicated his award to his late friend, Jacob Gbadamosi whom they acted together in the 80s.

Nike Peller is one of the most talented actresses in Nigeria. The slim Yoruba actress was recognised for her outstanding recognition in Yoruba movie sector. She was highly elated and appreciate when she was asked to talk on stage. And the first thing she said was, at last! Because according to her, she has been attending many City People Awards but she has never been honoured. She dedicated the award to her fans in Nigeria and abroad who have supported her over the years.

This ageless beauty was recognised as one of the best in the industry. She got the Movie Veteran Award in recognition of her remarkable contribution to the movie sector. This beautiful veteran was so appreciative of what City People Magazine has been doing over the years in her life and career. She said, City People has been celebrating her over the years. She said, when you water others, you will be watered. “So, when City People honours actors and actresses, they do it sincerely and with all seriousness, and not as a result of money or any inducement.

The veteran actress also stressed that, there is no real acting again, that during their time, they went through tutelage before they can be called a good actor or actress, and todays actors/actresses need to learn from them; they need to learn from those who have been there. She said she has been acting for about 40 years and she thanked God for her life.

She thanked City People because the brand has been honouring her since she became a star many years back.

BARBARA SOKY WAS ALMOST IN TEARS

She is an ageless beauty. Barbara Soky was one of those who rocked the acting scene in those days. She was elated to receive a recognition award for her outstanding performance and contribution to the movie sector. She was highly emotional because, according to her, she has been doing so well as an actress for over 30 years and no one had recognised her with an award except City People. She said Thank you City People after many years and this will be my first after many years. Barbara is one of the female movie veterans who has done well.

FRED AMATA ALSO GOT AN AWARD

Fred Amata is a veteran actor. He has been around for years. He has paid his dues. He got a recognition as Movie Veteran Award for his remarkable contributions to the movie sector. He said City People is one of the most respected brands in Nigeria. He said then, artistes, always wanted to be in City People Magazine and he also thanked City People for celebrating him when he turned 50 years back.

One of the best TV series in the 80’s is Village Headmaster. The Cast and Crew of this popular TV series were present at the 2019 City People Movie Awards Village Headmaster was honoured for the remarkable impact it has had in the movie industry over the last 50 years.

The Actors Guild of Nigeria, Lagos Chapter was honoured as the Most Active Chapter of AGN in Nigeria. Members came enmasse to receive the award.

One of the best veteran actors in Nigeria is Tony Akposheri. He is a veteran actor who is still very active. He was very excited when he was called to receive a recognition award. He got a Movie Veteran Award in recognition of his remarkable contibution to the movie sector. A lot of his friends accompanied him to the stage to receive the award. One of them is Fred Amata.

A lot of actors came in from Kano and Kaduna. Kannywood has done so well in producing outstanding movie stars. At this year’s City People Movie Awards some of these stars were honoured. Below are some of them.

READ ALSO: GISTS FROM THE 2019 CITY PEOPLE MOVIE AWARDS – READ ABOUT THE MOVIE STARS THAT ROCKED