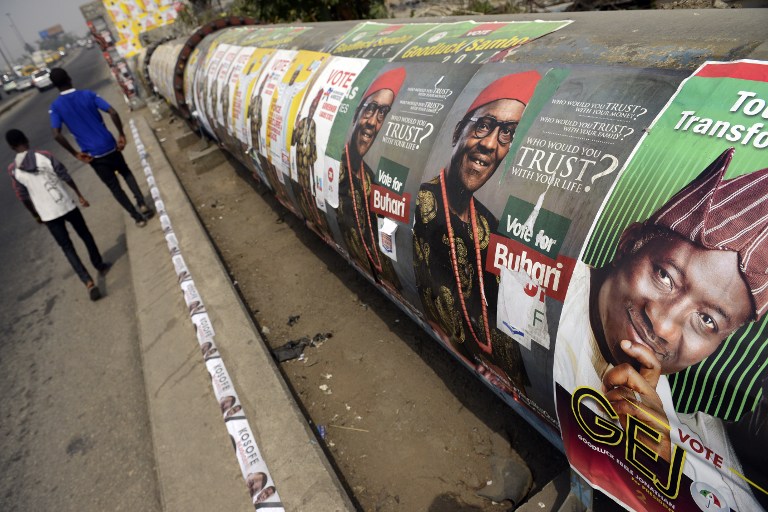 A relief from the deluge of refuse generated by posters is imminent as the electorates to the polling booths on Saturday to cast their votes for candidates of the choice in Presidential and National Assembly elections. Standard bearers of different political parties took to the billboards, fliers, posters, roll up banners, car stickers, banners to woo voters to cast their lots for them. As the cheapest of all campaign materials to reach voters, posters are everywhere.

They are ubiquitous pasted on street light poles, road maidian, wall fences of public schools roundabout, piles of pedestrian and fly-over bridges, local government secretariats. Anywhere you turn, many posters, selling one candidate or the other of different parties are beckoning you to cast your vote for their candidate.

Every other day, one political party hatchet men are removing or vandalizing posters of a rival party, only to replace them with their own. Besides, intensification of poster war egged the parties to change and replace their posters that have been on display for a few days earlier with new ones that carry fresh messages and photographs of candidates.

Sanitation workers, those responsible for keeping streets tidy and street sweeper would tell anybody who cares to ask about their jobs now that they have to redouble their efforts to cope with cascades of campaign posters refuse.

Campaign posters have defaced streets in state capitals, towns and other urban centres rural areas throughout the country. Posters pasting is among electoral rites. An harvest time for printers as they smile to the bank, while streets sweepers are given more jobs to do if they want to be on top of their game.

Now, supporters of candidates contesting different offices, from presidency to governorship, senatorial to House of Representatives seats and state Houses of Assembly seats are out pasting posters to promote and sell their principals to voters.

From Sunday, February 17, only governorship and Hoses of Assembly candidates will continue pasting their posters to induce people to vote for them. Undoubtedly, a breath of relief would sweep through the nation as the fate of presidential and National Assembly (senatorial and House of Representatives candidates) will be decided on Saturday, February 16.

2019 ELECTION: RELIEF FROM REFUSE OF POSTERS was last modified: February 13th, 2019 by Reporter