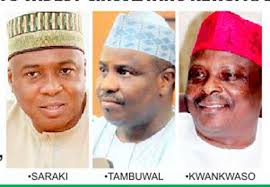 The Peoples Democratic Party (PDP) has given room for Senate President Bukola Saraki, Governor Aminu Tambuwal of Sokoto State and former governor of Kano State, Senator Rabiu Musa Kwankwaso, to contest its presidential ticket ahead of the 2019 general elections.

The party also gave leeway to other returnees who wished to contest various offices to do so.

Tambuwal, Kwankwaso and Saraki dumped the ruling All Progressives Congress (APC) for the PDP a few days ago ‎ostensibly to contest the party’s presidential ticket.

Speaking at the 81st National Executive Committee (NEC) meeting of the PDP on Thursday in Abuja, the party’s National Chairman, Uche Secondus, said the returnees had equal rights as the existing members.

“Three more governors and some ministers are coming to our fold, they (APC government) are not aware. Security and economy have collapsed, they are ‎not aware. There are killings in different parts of the country, they are not aware. Until we reclaim power in 2019, they won’t be aware of anything,” Secondus said.

Secondus also warned against any plot to impeach Saraki.

All other presidential aspirants on the platform of the party were present at the NEC except former Vice President Atiku Abubakar.

Addressing members of the NEC, Tambuwal said the PDP would resist any attempt to impeach Senate President Saraki, arguing that the law is clear in that regard.

Saraki urged all party leaders to return to their constituencies, open their arms and receive the numbers that would give the party victory in 2019.

Addressing newsmen at the end of the meeting, the PDP National Publicity Secretary, Kola Ologbondiyan, said the NEC approved the amendment of PDP laws to be in tandem with the ‘Not Too Young to Run’ law to allow youths’ participation in electoral contest.