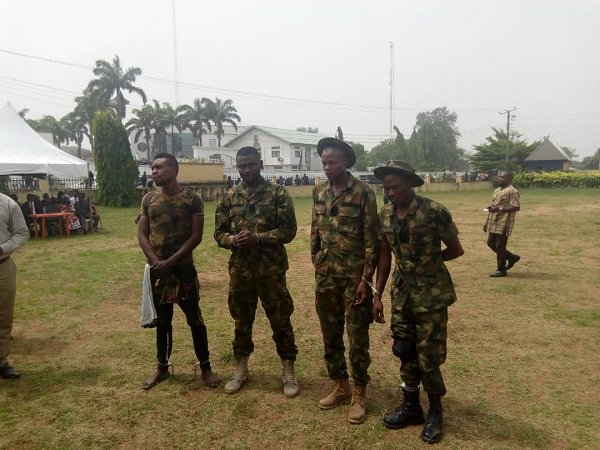 Four fake soldiers escorting an unnamed politician have been arrested in Owerri, the Imo State capital, in the wake of the forthcoming Presidential election.

The Commander 34 Artillery Brigade Obinze, Brigadier General H. I Bature, while parading the suspects, who were fully dressed in Military regalia, during a Peace Parley for candidates, disclosed that fake soldiers have infiltrated the state to cause chaos during the general elections.

He stated that desperate politicians have equipped hoodlums with Army Uniforms and weapons to perpetrate violence in the state, warning that all those involved in the ignoble act will be fished out and dealt with.

According to him, “two of these fake soldiers were arrested escorting a politician. You will marvel at the kind of ammunition that was in their possession. But no matter how much they disguise, we have a way of finding out the fake soldiers.

Meanwhile, the State Commissioner of Police, Dasuki and Galadanchi, urged the politicians to play by the rules and shun all forms of violence.

According to him, the State has witnessed relative peace when compared to other states in the Federation, as a result of the “cooperation and support of the people of the state”.

He said, “you will agree with me that this hard-earned peace and tranquillity we enjoy and experience in Imo State should be guarded jealously, thus, we have no other option than to ensure this endures before, during and after the elections.”