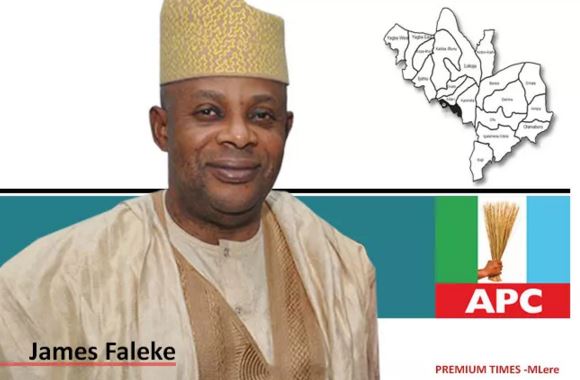 The deputy governorship candidate of the All Progressives Congress (APC) in Kogi State, James Abiodun Faleke, has given several reasons President Muhammadu Buhari may lose the 2019 election in the state.
Faleke, a former campaign coordinator for Lagos State, advised President Buhari not to get carried away by the recent boastful exclamation from Kogi State Governor, Yahaya Bello.
Bello had during a visit to the Presidential Villa, boasted that he would ensure Kogi delivers more votes for the president in 2019 than Katsina, his home state.
Faleke said the governor had no such capacity in view of the level of his unpopularity in the state.
He wondered how a governor who has notoriously neglected the welfare of the citizens of his state by owing them several months of unpaid salaries and pensions; a governor who cannot even provide basic infrastructure like water, road, and hospitals; a governor who through his ineptitude has become the most unpopular governor the state has produced, can boast of being able to lead the same citizenry who were daily dying of hunger to vote en masse for President Buhari.
In a statement he signed and made available to newsmen on Tuesday, Faleke said, “I refer to a boastful statement credited to Bello that Kogi State would garner more votes for President Buhari in 2019 than Katsina State and I ask myself why is the governor fooling himself thinking he is fooling Nigerians.
“First, the governor has never contested for any election and won before. Not even councillorship election.
The governorship seat he is occupying today, he didn’t campaign for it. He was simply gifted the seat, so how can such a person stand to discuss election issues?
“How can a governor who is not registered as a voter in his state mobilise vote for no less a person than Mr. President?
can a governor who has been indicted by INEC for fraudulently engaging himself in double registration lead the campaign train of Mr. President across the state with such a moral stain hanging on his neck?
“What does he know about mobilisation of people for elections? So when elections are being discussed, he should be told to keep quiet?
“My questions are how will Kogi under Bello vote more than Katsina the state of origin of Mr. President?
Is it because of his zero performance, his wasteful management of resources in his state or is it because of the rampant kidnapping in the state, incessant killings of labour leaders and dissenting voices as compared with Katsina?
“The governor’s Chief of Staff, Edward Onoja, in a video gone viral had told a labour leader in the state that he was hitherto gunning for the labour leader’s head but that he was lucky to be present with him in the same church that day. Is that how to attract voters to PMB’s Camp? What achievement is Bello going to use to campaign?”
“What would be his campaign ground in Okunland where the number of civil servants being daily buried outnumber those getting married?
What about several other Okun people who died after being kidnapped on their way to attend the Governor’s endless staff verification exercise in Lokoja?
“Another staff, Sunday Oke, owed 16 months salaries died in Kabba, Monday 8th of January after being unable to pay for his medicals what is he going to say about his inability to asphalt or grade a single road anywhere in the area?
A glaring example was the recent campaign of the governor across Okunland where he could not talk about a single road, hospital, schools etc.
“He had constructed and commissioned in the area. Or will he be proud to mount the podium in Igala land to tell them about a non – existent project in the area?
“A cursory look at INEC’s data base shows that Katsina State during the 2015 general elections had registered voters figure of 2,827,943 while Kogi had 1,350,883.
So, how does Bello want to perform the magic of doubling Kogi’s votes to beat Katsina? Discerning Nigerians know better than take him seriously.
The governor likes to play to the gallery by making statements he knows are false. I am sure great minds in the Presidential Villa, APC leaders across the nation know better.
“The question is will President Buhari contest? If yes, will he win Kogi under Bello as Chief Campaigner? “The answer is NO.
This is because he has killed the APC in the state, demoralised and dehumanised the citizenry with his policies, thereby stripping us of critical campaign issues in the state.
President Buhari can only win if the governor is not allowed to lead the campaign. He will win because of his record of performance in the country. Certainly not because of the performance of Bello.
“For instance, PMB would not need to campaign in Lagos and some other South-west states before he wins.
Ditto States like Kebbi, Sokoto, Jigawa and some other states in the North. The performances of these governors have provided enough campaign materials for Mr. President.