2020 CITY PEOPLE AWARDS FOR EXCELLENCE HOLDS IN LAGOS VIA ZOOM 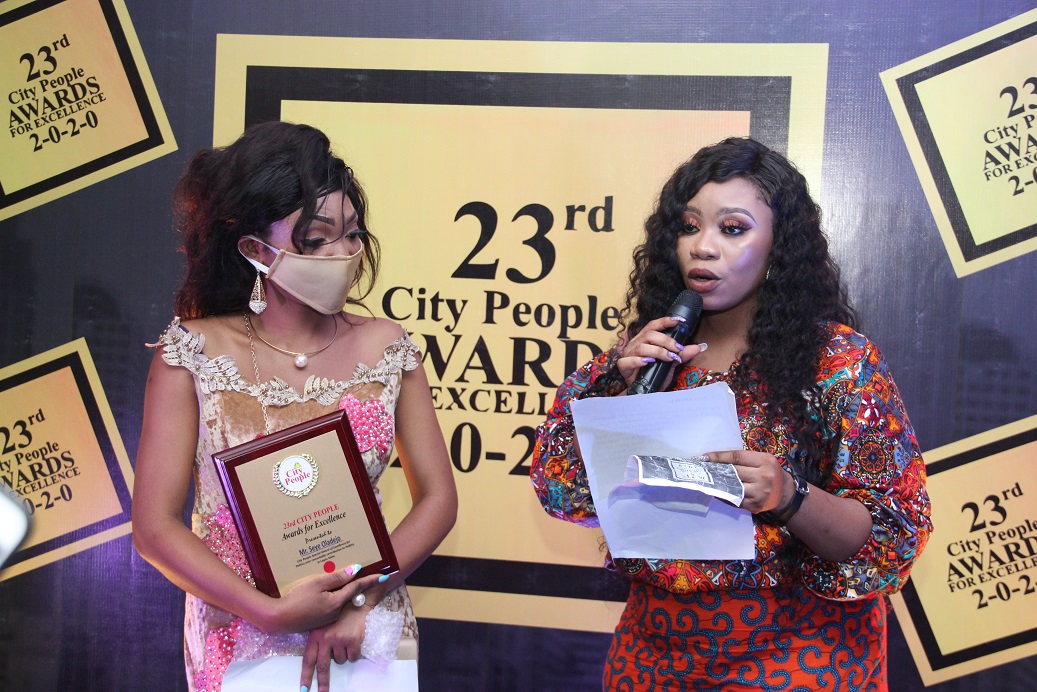 The 23rd Edition of City People Awards for Excellece was held in Lagos last Sunday, 5th July 2020, via Zoom.

It was the first time the award will be holding via this new technology, as the winners joined the award event, via their phones and as each awardee received awards, they made acceptance speeches via Zoom.

Only the organisers were physically present at the venue, which was the City People Event Centre, Gbagada, Lagos.

The colourful event was anchored by popular actress and movie producer, Wumi Toriola who looked sweet and who thrilled the audience.

Popular saxophist, Segun Oluwayomi ushered in guests with several sonourous tunes which set the tone for the 3 hour event. The mind-blowing decoration of the venue by Kehinde Iyiola, wowed guests, as she transformed the look of the venue.

There were about 28 awardees made up of eminent Nigerians drawn from the Public and Private sector. Mr. Seye Oladejo, the brilliant Lagos APC Secretary was honoured for his remarkable contributions to Politics in Lagos State.

Popular TV Presenter, Seun Okinbaloye was also honoured for his contributions to Journalists practice in Nigeria. The Tony Elumelu Foundation was honoured for its youth empowerment initiatives and UBA Plc emerged The Best Run Bank of The Year.

LASEMA GM, Dr. Femi Damilola Oke-Osanyintolu was named the Best Disaster Manager in Nigeria for 2020, whilst LASEMA itself won the award as The Best Responsive State Emergency Management Agency (SEMA).

Jonliz LLC was named City People Best Indigenous Company in E-Commerce, whilst JMSlide was City People Best Movie Streaming Site of the Year. One of the leading fashion designers in Nigeria today, Yewande Hakeem-Habeeb, who is the CEO of QUBRAZ designs, was honoured for her contributions to the Fashion industry.

Prince Yommy Ogungbe was honoured with a Special Recognition Award for his remarkable contributions to the Hospitality Sector. DAWN Commission was also celebrated at the award for fostering regional co-operation and integration among South-West States.

Tungba King, Yinka Ayefele was celebrated at the awards, along with his Fresh FM Radio, which emerged the Best Radio Station in Nigeria. Wave making Gospel Singer, Evangelist Laolu Gbenjo was honoured. Female Real Estate player, Elizabeth Bola Akinrele was honoured for her contributions to the Real Estate sector.

Hajia Halima Apatira-Baruwa, the beautiful lady who sells Fabrics & Gold was also celebrated. Metrofile Events Diary on Channels TV was honoured for its remakable party average Ludare, the Juju Wave-making musician was honoured also for his contributions to the Juju music sector.

How My Dad, EBENEZER OBEY Runs His Ministry As G.O