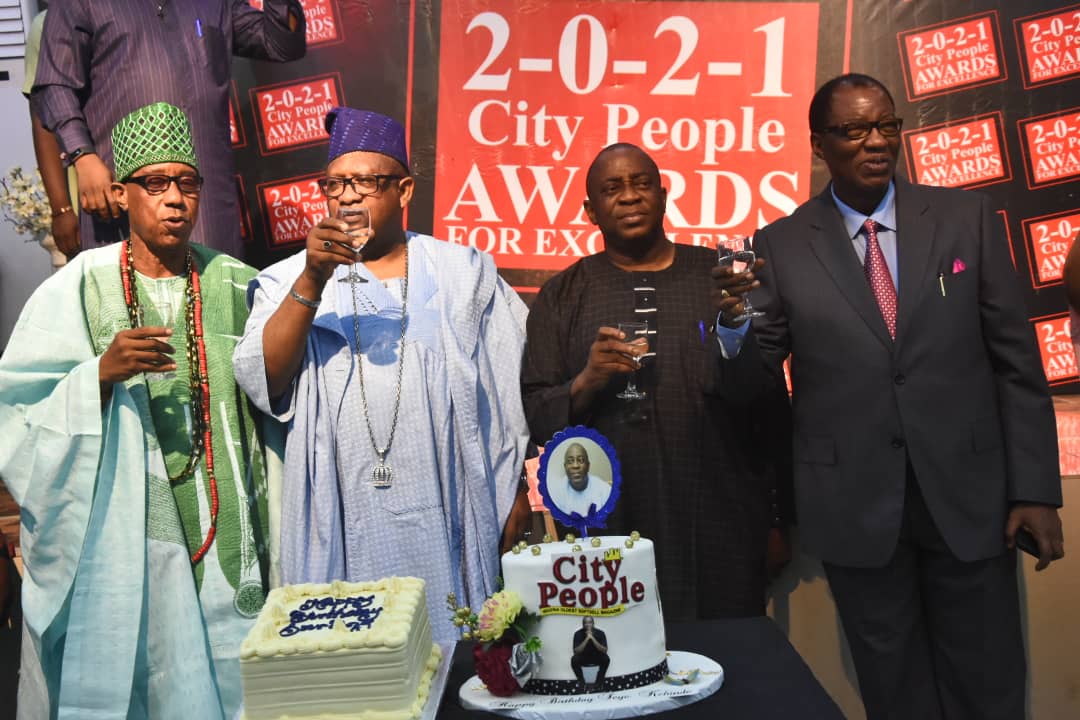 The 2021 Citypeople Awards for Excellence has come and gone but the glitz and glamour that characterised the event will remain in the memory of those who witnessed the event.

This years’ event is coming on the heels of Citypeople’s 25th anniversary, and the publishers 56th birthday, this makes it a 3-in-1 event.
The Star-studded event was held on Sunday, 25 April 2021.at the prestigious Conference Hotel Abeokuta. The event kicked off with the sonorous rendition of classy juju performance by Segun Rockers. The popular juju highlife singer kept the crowd spell-bound, before the vent began proper.
MC Dr Smile also delivered his best as he took to stage to render jokes and compliments that captures the nature and peculiarity of the event.
Multi-talented philanthropist and engineer, Funmi Ayinke waheed Adekojo was at the center stage as she bagged no fewer than 3 awards at the event. She performed opening national anthem and the popular Ise ya anthem known as Ogun State anthem.
Two-term governor and statesman, Otunba Gbenga Daniel was also in attendant with his entourage, who came to support the brand which has just clocked 25 years.

The governor commended Citypeople and the publisher for his doggedness and commitment to sustaining the brand as the only existing softsell on the vendor’s stand in Nigeria.
The first awardee to receive award at the event was Rosola Foundation, This was followed by the Mace Club of Ogun State. Otunba Ademola Popoola was also honoured at the event.

Chief Bode Mustapha bagged the Lifetime Achievement Award for his immeasurable impact in the state. Other awardees include Olajumoke Adekoya,, Fashina Olajide, Ashabi Olorisha, High Chief Iwaeni Anthony, and many more.
The event was honoured by a galaxy of royal fathers, including the Abumawe of Ago Iwoye, Oba Rasaq Adenugba, Alaperu of IPeru, Oba Adeleke idowu Basibo, Gbagura and a host of other royal fathers.

The True Story Of My KIRIKIRI Jail Saga – GENESIS Pastor