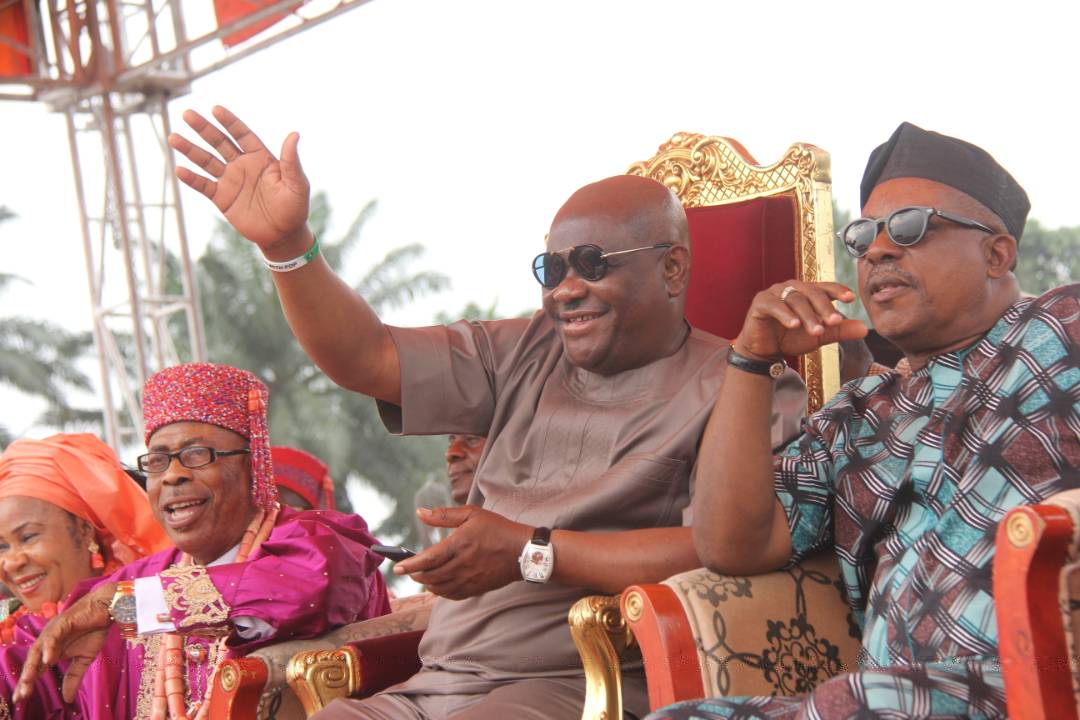 Rivers State Governor, Nyesom Ezenwo Wike, wants to run for President. So also is Prince Uche Secondus, the National Chairman of the PDP. The 2 prominent Rivers politicians have already begun the fight for who will clinch the party’s ticket for the Peoples Democratic Party (PDP) come 2023.

First, in the line is Governor Nyesom Ezebunwo Wike who  has set up political pressure group known as Grass roots Development Initiatives—GDI in the 774 Local Government Areas of Nigeria since 2020. This is the same political pressure group that he established in 2013 preceding his inclusion in the Federal Executive Cabinet of the then President Goodluck Ebele Jonathan in the 23 Local Government Areas of Rivers State in 2014 before the Rivers State chapter of PDP Gubernatorial Primary election. With this political structure in 2014, he was present in Rivers State touring the 23 LGAs launching his GDI chapters against all odds, while other governorship aspirants were watching and some being carried away with his political gamesmanship.

In 2023, Governor Wike will no longer be giving room for speculation on his avowed Presidential ambition as he had come out to say that he would give presidential election a trial whether he succeeds or not that he must try. Asked whether he would vote for President Goodluck Jonathan should he defect to All Progressives’ Congress –APC being his kinsman, Wike retorted that he did not cast his votes on ethnic sentiments, but as a party loyalist he would go wherever his party goes. But to think about his contending reality of having a National Chairman of his party come from his own state and supporting a Northern Presidential aspirant instead of himself, Governor Wike is having sleepless nights on this serious obstruction to realizing his ambition to become elected President of the Federal Republic of Nigeria come 2023. Should Prince Uche Secondus during the upcoming National PDP Convention emerges as National Chairman for a second term this would undermine Governor Wike’s aspiration to become Presidential candidate of the party.

Second, should Rivers State Governor insist on contesting PDP Presidential Primary election, one of the odds against him would be the overshadowing presence of National Chairman, Prince Uche Secondus, who hails from Ikuru town in Andonni Local Government Area of the state. Political pundits have it that the Rivers State Governor is currently pushing for a Northern National Chairman of the PDP, which will truncate the second term ambition of Prince Uche Secondus. Thirdly, at home in Rivers State, Prince Uche Secondus is not giving out his political structure as he fortifies his base with politicians who would be loyal to him at all times, especially during the April 17th, 2021. In the Rivers State Local Government Elections Prince Secondus and Governor Wike had a running battle on selection of Chairman of Andonni Local Government Council as the incumbent, Paul Lawrence, lost in the primary election while Governor Wike’s stooge and loyalist, Mr. Erastus Awortu won. This set the battle ground clear as a former Deputy Governor to former Governor Chibuike Rotimi Amaechi, Engr. Tele Renner Ikuru, a cousin to Prince Uche Secondus, now has an option which is to vie for 2023 Rivers State Governorship election, having come from one of the Riverine coastal communities of Eastern Obolo Ijaw ethnic nationality.

For Nyesom Wike, retaining key foot soldiers inside populous Local Government areas in the state would help in determining who succeeds him in office. For instance, his home front, Obio/Akpor Local Government Area, with over 60 percent voting strength in Rivers State because of density of migrant business owners  is home to the Oil & Gas sector such as Shell Petroleum Development company SPDC, Nigerian Agip Oil company NAOC, TotalFinaElf Producing Oil company and other ancillary Oil Service companies from which Obio/Akpor LGA derives much internally generated Revenue. He had the erstwhile Chairman, Solomon Abel Eke, replaced with Barrister George Ariolu, a formidable Wike loyalist. While in Ahoada West Local Government area, he has former Rivers State House of Assembly member, Honourable Hope Ikiriko, retained and in Emohua LGA the strong politician Julius Chidi Lloyd PhD a Law Lecturer at University of Nigeria, Enugu campus and a former Majority Leader in the Rivers State House Assembly taking over as elected Chairman of Emohua LGA while Honourable Tom Aliezi was shown the way out. In Ikwerre Local Government Area, Wike outsmarted former Governor Celestine Omehia as he never joked with loyalty and competence as he retained Samuel Nwanosike PhD, in Risk Management Project from University of Port Harcourt. In Ogba/Egbema/Ndoni Local Government Area, where a former Chairman of PDP in Rivers State Brother Felix Obuah, hails from Wike maneuvered him to have Honourable Vincent Job Nwaobakata, a native of Omoku town replaced, former Chairman Ifeanyi Odili from Ndoni District. Again, in Gokana LGA, Wike struggled with a former Secretary to State Government SSG and former Minister of Investment, Honourable Kenneth Kobani outplayed as Honourable Confidence Dekoo took over from Paul Kobani.  Long lasting Tai LGA chairman, Dr. Jacobson Nbina, a hardworking technocrat was dropped, while Okpe Friday was selected in his place by the Governor. In Etche Local Government Area, another high populated voting area, there was another kettle of fish as South-South Political Octopus chief Allwell Henacho Onyesoh’s choice never scaled through as Governor Wike who has plan B in 2023 for replacing Senator George Thompson Sekibo in the Senate of which he knows is Etche ethnic nationality’s slot he had to placate Etche strongman, Chief Elder Emma Anyanwu, by returning his son, Obinna Anyanwu as Chairman of Etche LGA. In Akuku Toru LGA, Wike’s plan of making his current Secretary To state Government SSG, Barrister Tamunobaabo Wenike Danagogo, a doctorate degree Law graduate, popularly addressed as TAMMY Governor. For Oyigbo LGA an Igbo- dominated community in the Rivers State where PDP state chapter Chairman Ambassador Desmond Akawor, hails from, governor Wike removed Ambassador Akawor’s loyalist incumbent Chairman Honourable Gerald Oforji, the son of late Rivers State House of Assembly member, Prince Oforji, and replaced him with his own choice.

THE EMERGENCE OF DEPUTY GOVERNOR

Governor Wike has finally settled on the choice of Dr. Tammy Danagogo a Riverine man, as 2023 Governorship candidate All Progressives Congress APC has already zoned its Governorship ticket to Riverine coastal communities of the state. It is an agreement settled for Dr. Tammy Danagogo, who in conjunction with Kenneth Kobani  alias KK, who in 2014 jointly purchased PDP Governorship Expression of Intent Form for their then Colleague Minister Nyesom Ezenwo Wike as governorship aspirant in Rivers State.

Here Rivers State Governor Wike is thinking of applying the former Governor Seriake Henry Dickson’s option whereby he would pick his relation to contest for a senate seat and whenever he wanted it on a platter of gold, it would be easier for him to grab it from his blood relation, Bayelsa State Governor Dickson appointed Engr. Lawrence as Deputy Governor to Senator Duoye Diri, while he quickly replaced him in the Senate. So, for Rivers State Governor Wike, Ikwerre/Etche combination, an old Local Government Council has many ties in common. That’s one of the reasons Wike jubilated when Chief Allwell Henacho Onyesoh returned to PDP after a few years of political sojourn in APC. How would this card be played is a matter of time as Chief Onyesoh is a strong force in attracting votes in all the Ikwerre- speaking LGAs plus Etche/Omuma federal constituency. Therefore, asking Chief allwell Onyesoh to obtain expression of Interest Form for Rivers East senatorial seat, while he Wike struggles with his PDP presidential primary election should he succeed, Chief Allwell Onyesoh may have his ambition dropped as two valid electoral positions would not go to the same senatorial district in an election year like 2023. But should Wike fail in his bid to become PDP’s Presidential candidate, he and Chief Onyesoh have a score to settle.

What happens to Ogoni ethnic nationality’s clamour for political inclusion in Rivers State? Kenneth Kobani has returned to his BODO village Mechanized Farm project. Will he emerge as Deputy Governor in 2023? Many feel his political sagacity will outshine his principal if elected Deputy Governor. It is on that note that Wike is looking at Rt. Honourable Dumenene Deckor, a former Commissioner for Works, former Member, representing Khana state constituency in Rivers State House of Assembly, now a member House of Representatives, a loyalist of Governor Wike to the core. In 2023, a former Tai LGA Chairman, Dr. Jacobson Nbina may surprise political pundits when Wike would finally turn his search light on him for the position of Deputy Governor owing to his humility political astuteness and stability for he never defected to any other political party since 1999. Unlike Senator Barry Mpigi, who has fallen out with Governor Wike because of his alleged overzealous ambition to be Governor of Rivers State in 2023. How will a former Deputy Speaker Federal House of Representatives, Sir Austin Opara be politically settled since he is warming up to succeed Governor Wike as both are indigenes of Ikwerre? If all goes well according to Governor Wike’s plan, Austin Opara will be persuaded to drop his governorship bid as he would be placated with a juicy offer of nominating commissioners when formation of executive cabinet of the successor to the incumbent governor wins in 2023. The Ogoni axis of Rivers State has 4-LGAs comprising Gokana, Khana, Tai, Eleme and Oyigbo. For Brother Felix Obuah’s governorship ambition in 2023, Governor Wike will persuade him to contest the Rivers West Senatorial seat currently occupied by a woman, Betty Apiafi, from Abua/Odual LGA.  The Deputy Chairman of PDP in Rivers State, being a former Chairman of Obio/Akpor LGA from 1999 to 2020, Chief Aaron Chukwuemeka CEO of C’RON Hotels & Suites, Port Harcourt. With these successor’s plans put in place by Governor Wike 2023 Governorship election is already won and dusted in his kitty.

This is going to be a reversal of the Edo State melodrama that saw Governor Godwin Obaseki and Comrade Adams Oshiomhole’s political battle, favouring the astute investment financial expert who secured a second term victory at the pools irrespective of his disqualifications by his former party, APC. Here Prince Uche Secondus’s second term national Chairmanship bid will succeed because those who are backing him are truly in control of the economy. So, he is likely to outsmart his kinsman, Governor Wike, at the PDP National Convention, which will be a repeat of his trashing in 2019 at Port Harcourt by former Vice President Atiku Abubakar, who later emerged the PDP Presidential candidate in 2019. Those political influence and power remain sacrosanct for Prince Uche Secondus whose wife, Pastor (Mrs.), Ine Uche Secondus is a prayer Warrior and founder of the True Vine Women Ministry in Port Harcourt.