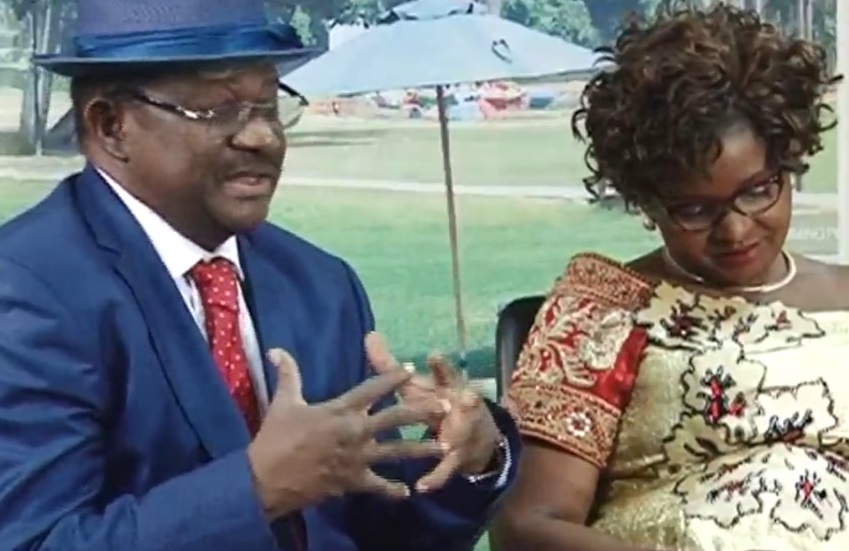 Ace Broadcaster, Chief Bisi Olatilo, has revealed to City People how he met and married his lovely wife, Mrs Folashade Tawakalitu Olatilo, 36 years ago. She will be 60 in a few days time. He revealed that he had to run away with his wife, Shade, to enable him to marry her 36 years ago.

In a recent interview, the 64-year-old media guru revealed how he eloped with his wife for months before her parents consented to their getting married.

“If I need to tell you the truth about how I have been able to make my marriage work, it is my wife I would commend and thank for having accommodated me for 36 years since we got married and for 3 years that I eloped with her. I always say that jokingly that I eloped with her, I abducted her, I kidnapped her, I kidnapped for love, for the sake of love. I took her away from her parents for about 3 years.”

Why did he do that? “Because I’m a Christian, she was a Muslim, they come from a very strong Muslim family and they didn’t quite like it. Her elder sister also got snatched by a Christian. And when it was my wife’s turn, they said not again, not in our eyes, not in our lifetime. So, I felt the only way to achieve it was to elope with her.

She loved me. She invested everything she has in me. We just had to elope. We went to hide ourselves somewhere for 3 years when we were sure that everything had gone down, we had been able to make a point, on the 19th of December 1981 when I got married, everybody came and it became a happy union then.

That was at Mapo Hall in Ibadan. We are 34 years old now in marriage. We are going into our 35th anniversary. It is my wife, whom I have to congratulate, to thank and continue to beg”. Why? “Because she forgets that I am a public figure. I don’t go out with my wife as I should  and she gets worried that they may take away her husband. I don’t blame her.

I say ‘No,’ they won’t take me away. The nature of my job is such that I always have very many important people around me wanting to have discussion with me, and wanting to get close to me. It’s just because of love.

I want to thank her because  if we don’t have a steady home, we would not be talking about somebody, who has been 40 years in this business and still this relevant”.
How come Bisi Olatilo does not look 64? “To be honest with you, I think it is work. Work is a therapy. I have been used to years of hardwork. I can’t slow down now. Some people have even advised that if I slow down now it may even affect me negatively.

And  this work I do is enjoyment Papaa. These days, doctors have advised that I trim down, I do much walk around my estate in Magodo, my wife and I take walks. I don’t have any health issues”.

The broadcaster, who has been in broadcasting for the past 42 years told City People that his most challenging and trying times were in 2015. “On the 28th of March that year, after the Presidential election.

We had the voting centre right infront of my office in Anthony Village, Lagos there. We had just finished doing that and I said let me go up and be following the news to see what is going on.

I was going from one channel to the other, somewhere along the line, I just smelt some not too palatable odour as if something was burning somewhere. By the time I looked out, the whole place was engulfed in flame.

Unfortunately, 2 of my studios that had equipment and facilities worth over N80 million all got burnt. We lost one very vital equipment, the transponder. That is the equipment that powers any transmission. We lost cameras, editing suites, graphic systems. It was like beginning all over again.

For all of that, we spent close to about N20 million putting things back and the most invaluable asset that we regret losing was our archive.

Before that, we had boasted of having one of the richest archive around, which most television stations didn’t have in Nigeria, dating back to 15 years or so.”

What was the cause of the fire incident? “Up till now, as we speak nobody knows the cause. And that has really affected our business because, nobody came to help you. Even though if it had happened to other persons, I would have opened my arms to help them. That is also a lesson I learnt.”

What are the other lessons he has learnt? “To be honest with you, the biggest lessons I have learnt are not to put your trust on any other thing than God.

Because on many occasions, those you call your friends you would just find that they are not your friends. They are so envious of you and your success.

But as the Yoruba say, the Sky is so wide we can all actualise our dreams. People come to us because we have a service to render. It is regrettable. I have given more to my friends than I am getting from them. The best way to describe some of them is they are friendly enemies. It’s sad that we should be having that, I go out of my way to celebrate and even over celebrate people. At some points, you would say old boy, he don do now, because why won’t we over celebrate ourselves? That is the problem I have with our people. I just hope God would take control and make us have a clean heart.

And if you have a clean heart, no evil will befall you, because you don’t think evil towards anybody”

“Some young people I met just keep wondering and marveling how I have been able to keep up the pace, comparable with a few others in my generation, who they say are fading away and I am even waxing stronger, breaking grounds.

My answer to them always is that it is hardwork.

I don’t know of any other thing. That is why if you are not as hardworking as you should be, you won’t be my friend. Some even say some people, who are less important than you and have not contributed so much, but have got awards and you haven’t and I said ‘no.’ I get my own awards everyday. I go to places that I don’t know anybody and you become the object of celebration. You go to an event that is the celebration of somebody’s birthday and you happen to be the one they would be celebrating.

They would be taking photographs with you and asking questions. They would start telling me the year they have been watching me on TV and listening to me on radio. Some are in their 40s and 50s. I get congratulatory calls from Nigerians who live here and those who live abroad. I can only thank God for that, because not everybody is that lucky. If you have been doing this for 40 years and your faulty is a fact and you are ok, I have to thank God for that, it is too late in the day for me to change.

“One thing I always pray to God to help me change if its possible, is my temper. And people say those of us, who have very clean heart always want to pour out our grievances. Yes. I am hot tempered, but I don’t sleep over any argument with anybody.”

How to Stop Your Cell Phone from...