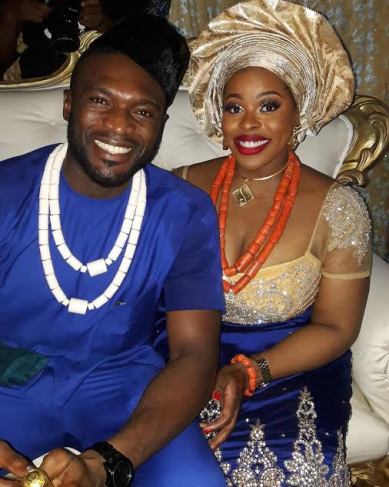 It has been a year of celebration for Nollywood as many movie stars tied the knot since the year kicked off. The marital celebrations seem to be increasing with more marriages taking place in the sector. In the last few months, a few movie stars got married to their heartthrobs .

The 4 most recent movie stars who joined the clique of married couples include star actress Yvonne Jegede. The talented actress got married to late movie icon Bukky Ajayi’s son Abounce.The couple who have been friends for over 10 years, tied the knot in grand style in Lagos. Next was Nollywood actor cum Ex Mr Nigeria Kenneth Okolie who got married traditionally to his US based fiancée Jessica. The traditional wedding was held recently in the bride’s hometown in Imo State and was witnessed by some of his colleagues and family members. Few days after, another popular Nollywood actor Prince Nwafor also got married to his light skinned and beautiful wife.

The ceremony which had an array of movie stars in attendance had the duo of Osita Iheme and Regina Daniel as Best man and chief bridesmaid. The couple had their traditional and white wedding ceremony, respectively. And just few days ago, another Nollywood marriage that blew the minds of many held in Lagos. It was the marriage introduction ceremony of popular music star Banky W and star actress Adesua Etomi.The couple who announced their engagement barely few days earlier, kicked off their marriage process with an introduction ceremony that had a bee hive of celebrities in attendance.

The couple who dazzled in wine red attire for their big day will be tying the knot officially in few months. The bride Adesua looked stunning in a red dress by Toju Foyeh. Her makeup was by makeup artist T.Alamode Beauty and Jewellery by Gbenga Artsmith. Her groom also wore matching colour outfit. The duo who featured in the hit movie titled The Wedding Party where they starred as newly married couple, took all by surprise with the news of their engagement and ever since the revelation was made, a lot of their colleagues have been showering them with encomiums.

It is no doubt going to be the biggest entertainment wedding of the decade as both entertainers are big players in their sectors. The EME record boss who until recently have been touted as the hottest bachelor in the entertainment industry was the first person who announced their engagement on his social media with a story on how their paths crossed.

‘I Walked Out Of My 1st Marriage Because I Wasn’t Enjoying It’, Read Moji Olaiya’s last interview with City People Magazine