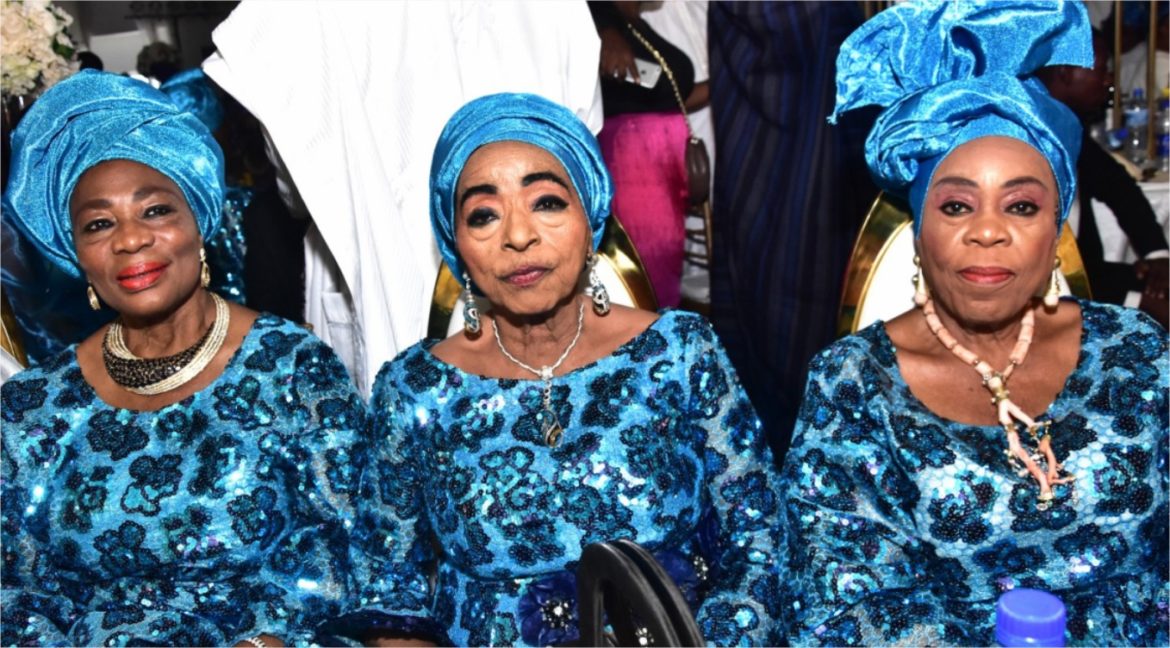 They have been friends for over 40 years and still counting. They used to attend parties together, until many months ago when stories began to make the rounds that Mrs Yewande Onilere and Sis Abah Folawiyo were no longer close as they used to be.

How true can this be? What could have caused the fight? Will these 4 celebrity friends turned sisters no longer be 4 but 3? What could make Mrs Yewande Onilere and her long time friend, Sisi Abah not attend parties together? Many couldn’t help but be bothered as their friendship was used as model for many celebrities friends.

This was why many people were happy to see Sisi Abah Folawiyo, known for keeping her old friends and treasure them like diamonds, was seen with Mrs Yewande Onilere, Senator Florence Ita Giwa, Yewande Onilere at OGD sons wedding two weekends back.

It was so obvious that Sisi Abah and her clique of friends love for each other never waned. They love themselves to the bone, and they treat one another with the utmost respect.

When Sis Abah Folawiyo stepped in a few minutes past 12pm, many were thinking she was going to party alone. The stylish society matriarch who is known for wearing gowns looked so ageless at 78. Her diamond set complimented her good look while she awaited the arrival of her other celebrity friends.

Exactly 1hour after she stepped in, she was joined by Mrs Ireti Asemota, the pretty wife of Sunny Motors owner. While they were busy chatting and gisting, Senator Florence Ita-Giwa walked in.

As expected, she walked in looking gorgeous in a skirt and blouse that fitted her curvy shape. Don’t forget that Senator Ita Giwa has eyes for the timeless diamond which complements her luxury shoe and purse. Her friends beamed with smile as they welcomed her to the event.

What about Mrs Yewande Onilere? It was her gele that stood her out. She sat beside her besto, Hajia Abbah while they chatted and enjoyed KSA music for many hours.

How did they all become friends? For Mrs Yewande Onilere many call her Sisi Abbah’s “Besto” because if you don’t see Yewande Onilere in her house, be rest assured that she will be at her best friend, Sisi Abbah’s house. How did they become close? Speaking with Yewande Onilere few years ago on how she became Sisi Abah’s Besto. She spoke on how they became close, she explained that they have been close for about 50 years. Her words “I became friends with Abbah Folawiyo when we were both in our 20s. We have been good friends.

Though sometimes, we have our ups and downs but we have been good friends but we never talked about our differences with anybody. We settle our problems within ourselves. It may also interest you to know that we were born the same month. Our paths crossed in downtown Lagos and that is Isale Eko to be precise. We met at a party and we just took to each other.

We were both married then”, she revealed. Another close friend of Sisi Abah Folawiyo is Ireti Asemota, the wife Chief Sunny Asemota, the auto-Mobile dealer. Mrs Ireti Asemota has been Sisi Abbah’s friend for over 50 years too. How did they become close, you may want to know? Well, they became close through a small fight on Lagos road. According to Mrs Ireti Asemota, “My friendship with Abbah started when I was in my 20s. We are age mates. On how our friendship started, it’s a long story but I will try and cut it short. I and Abbah met on Lagos road. I was driving with my husband and I used to drive so fast. Abbah was at my front and I decided to overtake her thinking she was not driving too fast. She parked and said, ‘why are you driving like this and I said, why are you driving too slow?’

My husband begged her and we ended up being friends that same day, she explained. Another friend of Sisi Abbah for over 40 years is Florence Ita Giwa.