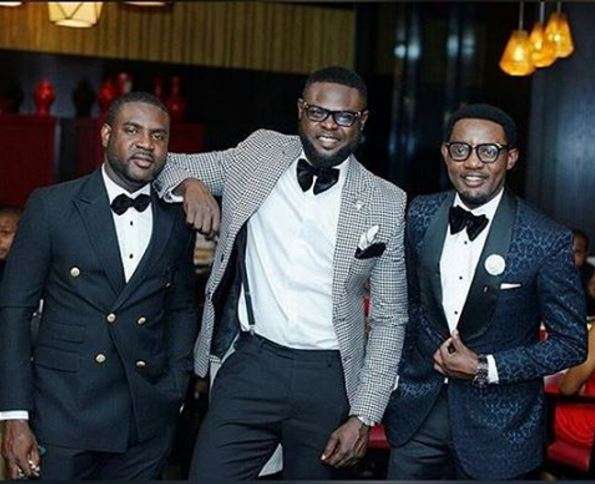 Even celebrities have siblings who are celebs too and here are five of them you should know about.

Siblings: Dakore Egbuson-Akande and Timini Egbuson
Sometimes when celebrities become famous, dedicated fans or admirers sometimes work towards becoming like them and in special cases, their siblings too.

We’ve come to see these celebrities not just excelling in their careers but also influencing their siblings to take after them. In some cases, we get to see these other siblings ride on the fame of an already established brand which works for them.

Dakore Egbuson Akande rose to prominence in the early 2000s when she started featuring in big Nollywood movies. We can’t forget how she became famous for her ‘Bad girl’ roles in a number of movies. It didn’t take time before she became one of the A-listers in the movie industry.

Then came a young cute guy probably in his late teens called Timini Egbuson who gradually rose to become a known name in the movie industry, a lot of people had no idea he was Dakore’s younger brother. Well, it didn’t take long before their relationship became known and since then Timi has had a successful career. Even though Timi Egbuson is super talented, his sister’s influence has played a major role in his career.

The truth about this next celebrity siblings is that Linc Edochie actually started acting in Nollywood before Yul Edochie back in the 90s. A lot of people already know that these two fine gentlemen are sons to the Nollywood’s great, Pete Edochie.

For Yul Edochie, he came into prominence in the mid-2000s and since then he has remained one of the most sought-after actors in the ever growing industry. Linc and Yul apart from being successful celebrities have a striking resemblance; voices that can match for an OAP and most importantly are very handsome hunks.

Ok, guys, we can assure you that a lot of people till date aren’t aware that veteran comedian, Gbenga Adeyinka 1st is the older brother to RnB singer, Capital Femi. Yes, guys, we know you might be in shock at the moment but the truth is these guys are blood brothers.

We get it, Gbenga is the funny and chubby looking guy while Capital Femi apart from being one talented singer can pass for a model with his charming looks. Femi who returned to Nigeria a few years ago to pursue his music career was signed to KENNIS MUSIC at one point which saw his music career grow.

Tunde Obe needs no introduction as he is the member of the music group, ‘TWO‘ which has his wife, Wunmi Obe as partner. That been said, Tunde Obe has a brother, Segun Obe, who they both share a striking resemblance.

Segun Obe became popular in the mid-2000s with some hit songs to his shelf. However, during a recent interview, he was asked why he had gone missing in action in the music industry; he said he has been busy working as a voice coach for a number of churches in Nigeria and the United states of America.

5. AY the comedian and Yomi Casual

AY and Yomi Casual are probably the most popular celebrity siblings at the moment because of a number of reasons which includes, the fact they both have very successful careers and are loved by many, especially on social media.

(AY and his brothers, Lanre Makun and Yomi Casual)

Unlike other celebrity siblings, AY is a known comedian and probably one of the biggest in the business from this side of the world, while his brother, Yomi is a fashion designer. Well you might not want to call Yomi a celebrity but guys let’s look at it from this angle, he has celebrity best friends, he makes clothes for celebrities and parties like a celebrity.

Ok,, guys, we have a number of celebrity siblings who didn’t make this list (Didn’t do it on purpose) but we hope they get to make it the next time we publish an article of this nature.

5 celebrity siblings you should know was last modified: August 8th, 2018 by Igbokwe John

WhatsApp messages can be manipulated by hackers –Cybersecurity firm