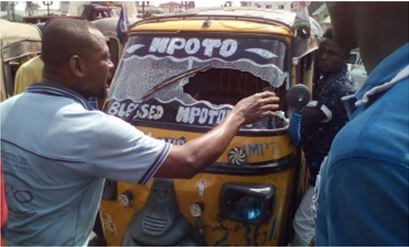 According to a Vanguard report, tricycle operators in Owerri, the Imo State capital, yesterday, laid siege on the Imo Government House, protesting the injuries inflicted on their members by officials of Imo State Environmental Transformation Committee, ENTRACO, trying to enforce government’s ban on Keke operations.
It was gathered from the protesting cyclists that over 10 tricycles were destroyed by the said government officials, just as some said they lost some of their valuables in the process.
They added that their tricycles were “snatched from them” and the little money they had made forcefully collected from them.
It will be recalled that the ban order by Governor Rochas Okorocha of Imo state, on the operation of Keke, within the Owerri metropolis, had not been stable.
Some of the protesters, who spoke to Vanguard, said: ”We are not happy the way we are treated in this state. The governor will give a directive and his men will be doing other things.
“Look, some of us have lost our money, others injured while some of us were attacked and our Keke disappeared.
“What do you people want us to do in these times of hardships? The governor has given us till January. Why are these boys treating us this way.”
5 Injured, 10 Tricycles Damaged as Keke Operators Clash With Imo Govt Officials was last modified: December 6th, 2017 by Arinze Ago