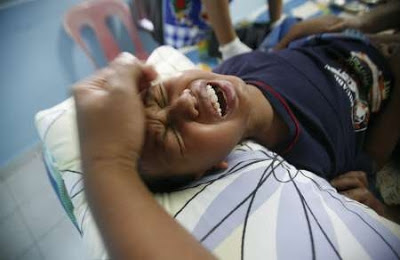 A five-year-old girl who injured her private part and had to be taken to the gynecologist by her grandmother has admitted that she’s been using a nail to make herself feel good.

This was revealed by PUNCH’s columnist, Temilolu Okeowo, who explained that the girl later revealed that the domestic help was the one who taught her on how to go about self-servicing herself.
She wrote;

Our society is so depraved and one just wonders the type of children these young ones would raise in future.

A five-year-old girl who has boils in her private part had to be taken to the gynecologist by her grandmother. Upon questioning how the boils got there, grandma herself was confused.

My friend told me grandmother had to be excused so she could speak with the little girl privately and make her divulge information she wouldn’t want her grandmother to have access to. Lo and behold, the little girl tells her she’s been using a nail to “play with herself” and in fact has taught all her friends and had once been expelled from a school for this act.

Dear reader, this is no fiction. My question to my friend was, “where’s this girl’s mother?” Her reply was that she’s an orphan!

If you’ve been consistently reading my articles since 2014, you’d recall I once published the story of an eight-year-old whose father discovered that she had been having sexual bouts with the boys in the neighborhood.

Her parents are alive and she lives with them!Now, have we ever considered the sexual exploitation kids in orphanages could be suffering? Yes! This is because if those who live with their parents still get up to all sorts, can you imagine what some other confused kids who are probably at the mercy of their care-givers could be exposed to?

Good News? Scientist almost done with the stem cell to raise the dead

Woman Disgraced After Footage of Her Having...