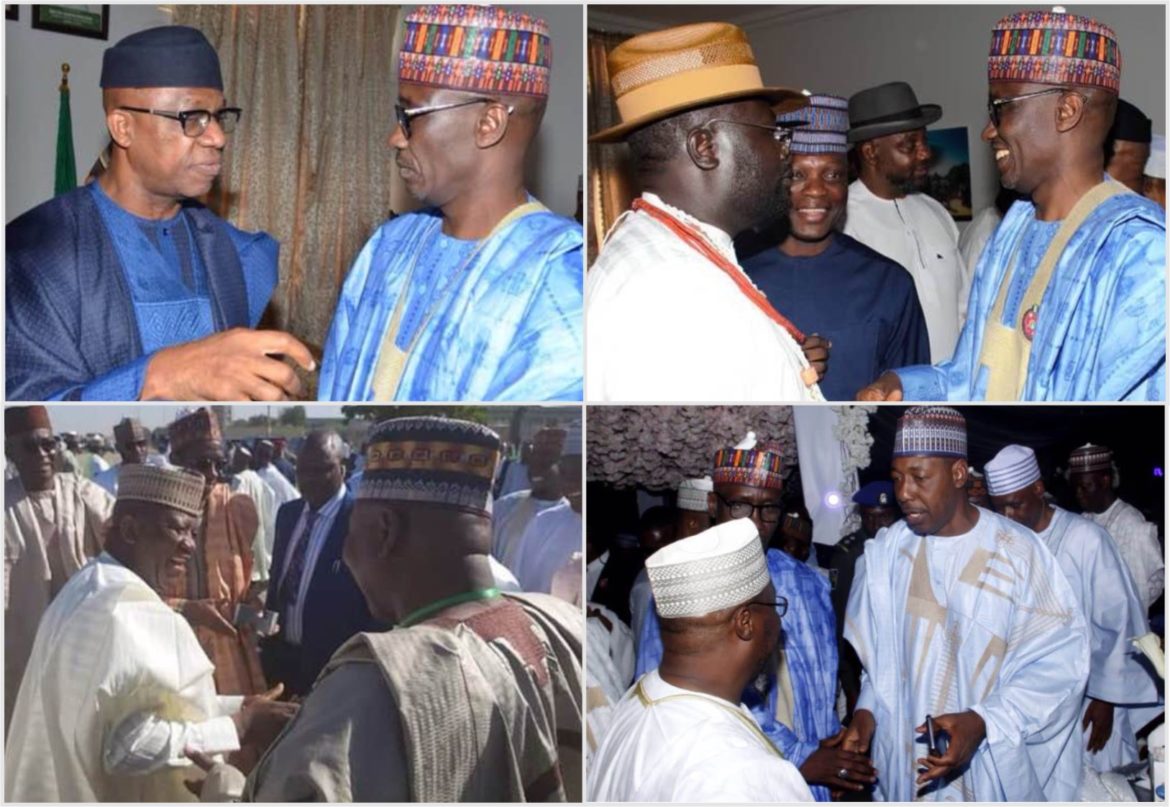 •How They Flew In Their Private Jets

The beautiful nuptials of NNPC boss, Mala Kyari’s son, Muhammad and Daughter, Sadiya, may have come and gone, but the memory still lingers on in the mind of all the important guests that flew to the northern city for 2 days because it can be termed as the classiest and most expensive wedding by Nigerians in Borno as we speak.

Everyone and everywhere was abuzz of the prep of the wedding and the families his children were marrying into did not do less, as they spared no cost to give their children a superlative wedding as well.. Many of those who got invited and were able to enter have had only one thing to say, that this is ‘’the northern society wedding of the year. They are even insinuating that there has been no wedding even in recent times that could match this particular one in terms of sheer extravagance & opulence, the money spent and all the big vendors who participated in the wedding. Close to 200 guests flew in to the city to honour both parents and it lived up to expectation as up 50 rich and powerful Nigerians flew in their private jets.

Unusual activities hit Borno State after fleets of aircraft landed at the Maiduguri International Airport for the wedding of the son and daughter of Kyari Mele, group Managing Director (GMD) of the Nigerian National Petroleum Corporation (NNPC).The event, which held in the North Eastern city on Saturday, saw Muhammad and Sadiya, the GMD’s son and daughter, get married to their different spouses.Not less than 40 aircrafts had conveyed prominent politicians, oil business moguls, friends and family members of the Meles for the spectacular ceremony.

While the wedding reception held at the government house multipurpose hall, government vehicles and those of various public institutions were said to have conveyed guests around the city.For security reasons, police and civil defense operatives restricted movement in major roads leading to the wedding venue in a manner that forced commuters riding back and forth to ply single lanes.

Amongst the super rich Nigerians that graced the ceremony were Abubakar Garbai Elkanemi, Shehu of Borno; Babaana Zulum, Governor of the state; and Ali Sheriff, a former governor of Bornu State, Muhammed Monguno, the national security adviser; Rilwan Akiolu, Oba of Lagos,Africa’s richest man, Aliko Dangote, ministers of the federal executive council, serving and former governors, senators, as well as northern emirs. Ever since the NNPC boss tweeted the date of the wedding and charged those who would be in attendance to put the family in their prayers, many had it all planned out to attend the colourful wedding. While there was traffic gridlock along the airport road and some parts of the city due to VIP guests that descended on the city, it was a weekend that people won’t forget in a hurry. The high society wedding provided a chance for the oil guru to flaunt his amazing wealth and international clout. From the start to finish, scores of guests indulged in a classy merriment. Sources at the airport said about 43 aircraft of various sizes, mostly chartered, landed at the Maiduguri International Airport.

The sources added that 20 aircrafts had on Friday brought guests to Maiduguri ahead yesterday’s wedding. “All of the aircrafts brought guests attending the wedding of the GMD’s son and daughter,” said the source.

The source added “no doubt there are state governors among the guests, but one cannot say who they are because they were all being conveyed in protocol vehicles with tinted glasses right from the tarmac.” The Borno state government also played a major role in assisting the new GMD to host his high ranking guests.

Government protocol vehicles, including scores of other vehicles poached from various public institutions, were deployed to help move thousands of guests around the city. Apart from providing the massive Government House Maiduguri’s Multipurpose Hall as the venue of the reception,most of the big guests are also being hosted in various government lodges.Most hotels in Maiduguri were fully booked days to the wedding.

The GMD’s children, Muhammad and Sadiya with their spouses were jointly solemnised at the palace of the Shehu of Borno, His Royal Highness, Abubakar Garbai Elkanemi. Governor of Borno, Babagana Zulum, and the state’s former governor, Ali Sheriff, played the role of ceremonial parents to the children at the wedding.

Mele Kolo Kyari,the new Group Managing Director NNPC who was appointed recently assumed office as the 19th GMD of the NNPC with a rich profile of professional and service credentials.A geologist, Mr Kyari is known in the oil industry as a crude oil marketer with outfield pedigree in petroleum economics and crude oil and gas trading. With over 32 years of experience in the oil and gas industry, his tour of duty traversed the entire value chain of the petroleum industry.

“Under his watch, the Crude Oil Marketing Division of the NNPC has recorded noticeable transformation in the management and sales of the various Nigeria’s crude oil grades via an infusion of transparency and automation of the processes,” the NNPC said of him in his official profile on its website. A 1987 Bachelor of Science (B.Sc) degree holder in Geology and Earth Science from the University of Maiduguri, he did his National Youth Service Corp (NYSC) as a Well Site Geologist with the Directorate of Foods, Roads and Rural Infrastructure (DFRRI) between 1987 and 1988.

Between 1988 and 1991, he worked with the Nigerian Geological Survey Agency before joining the NNPC subsidiary, Integrated Data Services Limited (IDSL), where he worked as a Seismic Data Processing Geophysicist in the Data Processing Department. In 1998, Mr Kyari was appointed the Exploration Geophysicist Production Sharing Contract (PSC) of the National Petroleum Investments Management Services (NAPIMS) until 2004 when he became the Abuja Operations Manager of NAPIMS.

In 2006, he was appointed the Supervisor PSC, Crude Oil Marketing Department (COMD) of the NNPC, from where he rose to the position of Head, and later Manager of Production Contracts Management of the COMD between 2007 and 2014. Mr Kyari was appointed General Manager Oil Stock Management, COMD where he worked till 2015 before being appointed Group General Manager, COMD and later Nigeria’s National Representative at OPEC up to his present position

Why I Went Into Active Politics – KENNY St. BROWN