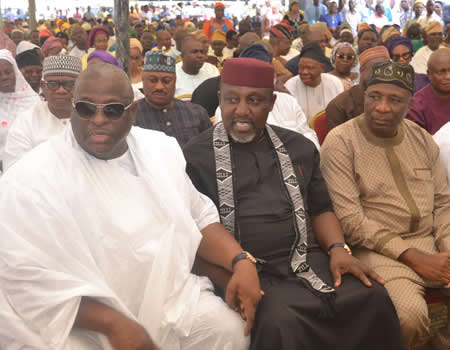 Saturday, 21st September 2019, would remain an unforgettable day for the prestigious family of Kashamu in Ijebu Igbo, as they had a grand burial ceremony for their matriarch, the late Alhaja Wulemot Ebunoluwa Kashamu, who was also The Iya Suna Muslumi of Ijebu Igbo before she passed on at age 96. The day marked the 40th-day funeral ceremony of the mother of Senator Buruji Kashamu, who is known to have shared a very close bond with his mum. Losing her to the cold hands of death during a brief illness on the 7th of August was a painful experience for the family and the community at large.

Iya Olobi, as she was popularly called was described as a very courageous, industrious, compassionate woman, who could give her eyes to the needy.

The entire town of Ijebu Igbo in Ogun State received an influx of unusual dignitaries who stormed Senator Buruji Kashamu mum’s burial at the Omo Ilu Foundation Headquarters, in Ijebu Igbo. It is one of of the most talked about parties of the year in Ijebuland, as it  had over 5000 guests in attendance. It was well attended by the crème de la crème of the society, royal fathers, political bigwigs, captains of industries, Islamic clerics, corporate organisations, to mention but a few. It was a show of wealth, affluence and luxury at its peak.

The event kicked off with prayers and the fidau was presided over by the Chief Imam Of Offa, (Kwara State), Sheikh Muyideen Salmon Hussein, and other eminent Islamic clerics who prayed for the deceased, her children and family. Over 20 Eminent Islamic cleric across Nigeria stormed the Fidau prayer. The Fidau lasted for hours and it was witnessed by political bigwigs.

Shortly after the Fidau prayers, the guests of Senator Buruji Kashamu moved to 3000 capacity Omo Ilu Foundation headquarters (hall) for the reception. The hall was beautifully decorated in gold and teal green with a guest list. Each table had the names of dignitaries expected to be on the table.

It was a gathering of royal majesties from different parts of the Yoruba race, who came to give royal blessings. HRM Olubadan of Ibadan, Oba Saliu Adetunji, The Olu of Ilaro and paramount ruler of Yewa Land, Oba  Kehinde Olugbenle Gbadewole, The Olu Of Itori Oba Abdul Fatai Akorede Akamo, to mention but a few.  It was a no invite, no entry event. There was maximum security and the security personnel were very diligent at what they were doing. They screened every guest and demanded their invites before allowing them in and there was no room for any form of gatecrashing.

One of the best musical bands in Nigeria, Faith Band and his men were on stage to welcome and entertain guests. They thrilled guests. Faith Band has been able to carve a niche for themselves in the music industry and they delivered their best at the event. Guests could not hide their feelings as they enjoyed the songs and sprayed crispy naira note on the band.

One of Nigeria’s best Comedians, Seyi Law, changed the atmosphere, as he cracked heavy jokes with the politicians and entertainers. He introduced guests in a comic way reminding them of what they are owing him. He mentioned that it was his first time of meeting the former senate president and he was extremely honoured to meet him. He engaged the guests and got their attention with his impressive jokes.

Nigerian top music producer and gospel artiste, Yinka Ayefele, was the guest artiste for the day and he thrilled guests with his songs for hours. The guests could not get too enough of him and they were asking for more. While Ayefele was entertaining the guests, Adekunle Temitope popularly known as Small Doctor walked in with his entourage of soldiers. He walked to the stage and paid homage to Yinka Ayefele, who gave him the microphone to sing for a while before his major performance. Also, Zlatan Ibile, who is also a top artiste entertained guests with his hit songs. One of Naijas biggest DJ HUMILITY was on wheels giving the best of Naija Jamz.

Senator Buruji Kashamus lovely wife, Susan Kashamu, rocked a luxury lace and jewellery. She was a beauty to behold and her fashion statement made heads turn. She was very warm and she made sure guests were properly taken care of. Her husband was seen loving up with her on stage.

What Many Don’t Know About Late OSHOFFA & I – Prophet ADEONIGBADE