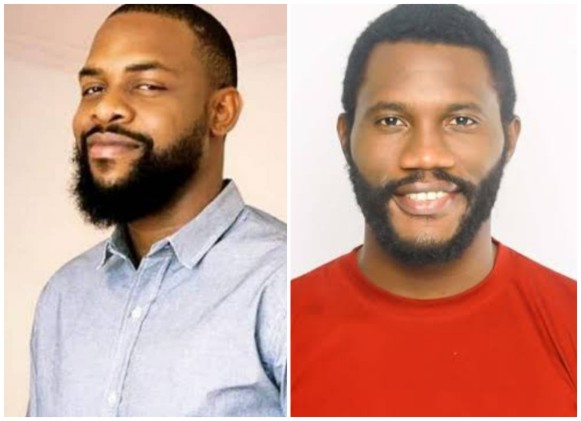 It has become a tradition in the movie industry, for young and highly talented actors to keep springing up and taking over from their senior colleagues in the industry.

This set of multi-talented actors are not just good at interpreting roles but also blessed with charming looks that any lady will die for any day any time. These wave-making and fast-rising stars are no doubt taking the centre stage in the industry, earning global recognition with their crafts and skills. Most of them are already household names because they feature in blockbuster movies back to back.

Also mainly because they are blessed with good looks that lots of ladies are tripping for.

Okey Jude is one of the finest actors in the industry. He’s also a model, news anchor and voice over artist. He is famously known for his roles in movies and series such as Bling Lagosian, Sweet Revenge, Tinsel and many more.

He is very handsome and highly talented in acting and interpreting roles.

Zubby Micheal is currently rated the richest actor in the movie industry. He was a businessman before he started acting in 2007. He is famous for his roles in Gangster, Lover Boy, stubborn and many other roles. He is indeed gifted.

Okey Uzoechi is an actor, a traditional musician and a businessman. He is known for his roles in TV series and movies such as Couple of Days, A Long Night, Murder At Prime Suites and Blessing Egbe’s drama series Lekki Wives.

Enyinna Nwigwe is an actor, producer and creative entrepreneur. He is best known for playing Nonso in The Wedding Party 2 and also playing Tamuno in Black November.

Tope Tedela is an actor and producer. A multi-talented award-winning actor who has won several awards home and abroad for his creativity and skills. He started his career as an actor in 2006, after featuring in the popular Television series Edge of Paradise by Greg Odutayo.

Daniel Lloyd is a popular actor and talent manager who once managed hip-hop artiste, Timaya. He officially started acting in 2006 with a movie titled Tempted To Touch. And has since remained one of the most sought-after actors in the industry.

Timini Egbuson, The Ladies Man as fondly called by lots of fans, is an actor, producer, known for Country Hard, Kamsi, Juju Stories amongst others. Many can never stop applauding him for his remarkable interpretation in the movie The Elevator Baby alongside World Best, Toyin Abraham.

Denola Grey is one of the most fashionable actors in the industry. He is a born fashion consultant, writer and on-Air Personality. He is one of the outstanding fashion gurus in Nigeria and he always stands out at events and is often adjudged as the best-dressed personality at most events, he goes to. He is also a very good role interpreter.

Kunle Remi is a popular actor, who is best known for his role in the movie family Forever and the series Tinsel. He came to prominence after winning the 7th edition of Gulder Ultimate Search in 2010. He’s a graduate of the New York Film Academy.

Ayoola Ayolola is a successful musician, singer and actor. He won the 5th Project Fame West Africa in 2012. This dark and very handsome actor is one of the most sought after in the industry and lots of ladies are dying to date him.

Mawuli Garor is an Accountant turned actor, model, TV presenter, entrepreneur and contents producer. Though, he is from Ghana but based in Nigeria and has a remarkable presence in both Nigerian and Ghanian movies.

Benjamin Nnayelugo fondly called Ben Touitou is a popular actor, model and famous in movies like Lagos Congars and Desperate Housewives. He remains one of the most good looking actors in the industry.

Stephen Odimgbe popularly known as Flashboy is an actor, model and television personality. He features in English and Igbo movies back to back. He became popular after featuring in Royal Battle and Princess Heart.

Tomiwa Tegbe is another talented actor many love. He was shot to the limelight after playing intriguing roles as Wasiu in MTV Shuga and James in My Siblings & I.

He began acting in 2011 after featuring in the movie Valour by Niyi Akinmolayan.

Abayomi Alvin is an actor, entrepreneur, model and screenwriter. His good looks have won him several awards such as Mr Ideal Osun State in 2012, and also Mr. Ideal Nigeria.

Stan Nze is another highly talented actor in the industry, a model and fashion designer, voice-over artist and television personality. He is very passionate in acting and delivers roles very well and rated one of many producer’s favourites in the industry.

James Gardiner is a very handsome Ghanian born Nollywood actor, model voice-over artist, radio and TV presenter. He has featured in lots of Ghanian and Nigerian movies. He is a fashionista to the core and looks good in everything.

Felix Ugo Omokhodion is an actor, model and filmmaker. He is best known for his role in the 2006 Tajudeen Adepetu series One Love. He is among the wave-making young actors in the industry.

Olumide Owuru is popularly known for his role as Tari in the popular series The Johnson. He is also a music maker, model, advertiser, MC and voice-over artiste.

Popular actor, Mofe Duncan is another fantastic actor in the industry, that many ladies are crazy about. He is best known for his roles in the movies such as The Three Kings, Talking Dolls amongst others.

Ray Emordi is also an award-winning actor, writer, model and musician. He has featured in over 300 movies and still counting. He is also known for his foreign-sounding accent in movies.

Asa’ah Samuel is a handsome, dark and tall actor, model and writer who has featured in high ranking Nollywood movies.

Baaj Adebule is an actor, model and filmmaker from Ogun State. He started acting in 2012 in the Mnet series Tinsel and has since featured in over 100 movies and still counting.

Buxxi Franklin is rated one of the most handsome actors in the industry. He has featured in blockbuster movies and is popular for his brilliant role interpretations in movies.

Efa Iwara is a highly celebrated rapper, actor and hip-hop enthusiast who has achieved so much for himself in the industry. He is popular for his roles in Shuga, The Eve, Put A Ring On It, and This Lady Called Life.

Eso Dike is a Lawyer, rapper, on-air personality and actor and he is popular for his roles in Jenifa’s Diary, Forbidden Fruit and Man Of Her Dreams.

Frank Konwea is an actor, dancer-choreographer and director. He was also a former housemate on BB Naija. He is among the wave-making stars in the industry.

Karibi Fubara is an actor and producer. He is known for we Speak Dance, God Calling amongst others. With a career in the industry spanning over 15 years.

Paul Utomi is an aspiring filmmaker with a degree in Economics from Lagos State University. He is also a voice-over artist and actor.

Jude Kene Achufusi is an actor, model professionally known as Swanky JKA. He is best known for his portrayal of Nnamdi Okeke in Living In Bondage. Young and highly talented, he is one of the finest stars in the industry.

Tosin Ibitoye is a brilliant actor and comedian. He is also a content developer, writer, host and media mogul.

Yakubu Mohammed is an actor, producer, director, singer and script writer. Indeed a multi-talented filmmaker. He is very hardworking and an ambassador to the leading telecom company in Nigeria Glo. He is indeed an household name in both Nollywood and Kannywood.

Ifeanyi Kalu is a fashion designer, actor and model. He is best known for his role in the movies Lagos Cougars and lots of others.

Lateef Adedimeji is one of the most brilliant stars in the industry, whose skills and script interpretation is close to perfection. He is an actor, filmmaker and director who is making waves in both the English and Yoruba movies industry.

And his fan base keeps increasing on a daily basis. A lot of ladies are more than willing to do anything just to spend time with Dimeji Lateef.

My Man Loves Me, But His Friends Hate Me