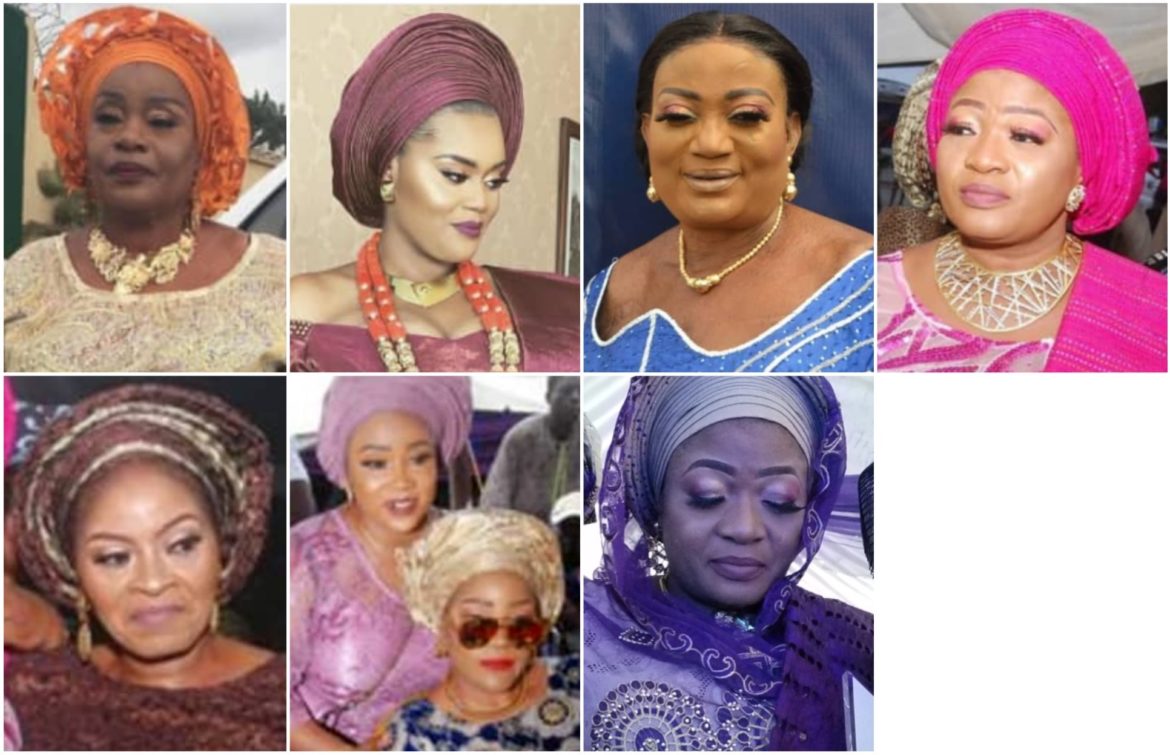 Not only did many of them had to change from their car, but some were also seen with their make-up artist who had to either change the “eye shadow“, “lipsticks“ to match with the colour code of each party. All the venues of each event were filled with “Oni-Gele“(celebrity headgear maker) who had to change the headgears of many of the society women who were  not wearing the  picked aso-ebi to the “Aso-Ebi“ gele of the new party

Many wondered why many of these celebrity women had to pick that particular date for their parties knowing that they will have over 70 per cent of the same crowd at each party. Some were even seen asking one another if they were coming to the other party. City People investigation revealed that many had to pick that particular weekend since the holy month of Ramadan is fast approaching and many hardly attend parties during such time. It was also revealed that this holy month always witnesses a low turnout of guests and this was why many Lagos society women decided to fix their party to the weekend closer to Ramadan.

Let us Gist you on how Lagos Society Matriarch, Alhaja Risikat Odunmosu, the Iyaloja General of all Lagos Fabric sellers shut down Ligali Ayorinde Street, Victoria Island. Mrs Risikat Odumosu fondly called Risikat Kolex threw a talk of town wedding for her last daughter, Oyinkasola amidst pomp and pageantry. The event took place at the New Queens park in Lagos and the colour code was cobalt blue affairs. The event paraded over 5000 celebrity women from all walks of life. Though Mrs Risikat Kolex’s husband, Kayode Odumosu is late but he is also very popular on Lagos social scene.

Oyinkansola Odunmosu got married to Lagos big boy Abiodun Lawal with many Lagos big men and business tycoon as in attendance. Oyinkasola who is her mum’s look-alike stole the show when she stepped out in Burgundy shimmer aso-oke from Shadiat Alasooke, the daughter of Lagos Fabric merchant, Hajia Sukurat Kalejaiye. Walking like a princess that she is, her beautiful flawless face was transformed by “Anita brows while Segun Gele tied her headgear. What about her 18carat Gold? It was sourced from the Gold store in Italy for the day.

Mrs Risikat Kolex who is the best friend of Mrs Rosemary Osipitan, the CEO of First royal oil came in with her many guests to share in the joy of her friend whom she calls “Amori“ while Risikat Kolex calls her “Abebi“. This duo is always a delight at many Lagos Owambe and that is why over 5000 wore the general hand-cut Aso-Ebi while over  200 society women rock the special Velvet Sequence Aso-Ebi“ which was specifically picked for mothers. Though many of the society women had to be at the 5 others parties, the love they have for Risikat Kolex made them turn out big as the hall was filled to the brim with celebrities from each South-West Zone. They didn‘t only move in train, the road which leads to the New Queens park was filled with powerful automobiles. Who won’t want to come and honour the Iyaloja of Idumota market that has been selling fabrics for over 30years? Perhaps none, it was an array of fabric merchants who are major players in the fabric sector in Nigeria.

Another wedding which made Lagos stand still for hours on Sunday 21st of April is the wedding of popular Lagos society woman, Mrs Olusola Ademosu, the best friend of Chief Mrs Bisi Abiola, the wife of Late Moshood Kashimawo OLawale Abiola. Her Son Babatunde Adfemosun weds Osun Princess, Oyeloyin, the grandchild of Soun of Ogbomosho land. The wedding which witnesses a huge crowd of many Lagos society women and babes took place at the spacious Landmark Event Centre on Ligali Ayorinde Street in Victoria Island.

Many who made Oyinkansolas wedding of hashtag “AOL19“ were also sighted at Landmark where “Tying the knot‘ took place. The wedding which was just a few meters away from where Risi Kolex daughter‘s wedding took place has been on the lips of many Lagos society women who had to shuttle both venues at different hours.  The beautiful bride, Oyeloyin was the cynosure of all eyes as she stepped out in green multi-coloured Aso-oke with her handsome husband to be. They were joined traditionally by Lagos celebrity Engagement Anchor, “     Ile OkoYa“ while a grand wedding reception dinner later took place at Ikoyi club in Lagos.

Though their Aso-ebi was similar in colour with Oyinkansola Osumosu’s wedding, but their headgear was a Majenta colour with touch of blue and many society women who made Oyinkansola’s wedding also made Oyinloye’s wedding in Victoria Island. Of course many of the bouncers allowed them in because not only did they have invitations for the wedding, they had to use the headgear colour code to wrap their body.  The likes of Hajia Morufat Shabi, Mrs Jokotade Adeusi, Mrs Bimbo Benjamin to mention a few were among who had to honour many of this Lagos society woman.

Another society woman who shut down Lagos same Sunday 21st of April was Iyalode Afusat Williams, the Iyalode of Odi-Olowo whose handsome the first son, Hon Olamide Akinsukanmi Williams shut down the whole of Time Square Event Centre, Ajao Road Ikeja, Lagos. Iyalode Afusat is the best friend of Alhaja Iya Saala Number 1 wine distributor who is also the Iyaloja of popular Apogbon drink market in Lagos Island and Alhaja Afusat Animashaun. These 3 Lagos society women are one of celebrity caucus that made Lagos social scene thick.

Though the “Omopeleat 40“ wedding hashtag Aso-Ebi was a royal blue and silver affairs but the majority of the society women wore the  Oyinkansolas Odunmosus and Oyeloyin wedding colour theme. The event which was planned, packaged by Hjaia Bolanle “Golditeventsolution“, the lady behind that popular Nollywood wedding hashtags “Oba2018“ was fully on ground to make sure the event was memorable. Though the event was strictly by colour code but the rules have to be bend to accommodate of Lagos society women who moved in droves for the 6 events. The likes of Alhaja Shine Ahine to mention a few who rocked the 2 Aso-Ebi for Risi Kolex daughter’s wedding was among many sighted at the birthday.

Over 300 Lagos society, women rocked the gold Aso-oke headgear which she picked as Aso-Ebi for her guests. The likes of Alhaja Kudirat Danmole, the CEO of Kuditex in Idumota were among many who rocked Aso-Ebi of Risi Kolex at the party. Many of Lagos society women who had to make other Lagos parties that took place that day were seen changing their attire in their car as they moved in droves to other venues. Don’t forget that Alhaja Batola is the elder sister of Alhaja Ajadi Lawa, the CEO of Lawa Fabrics in Idumota. She is also the younger sister of Alhaji Sati Ramon Salawe whom  K1 sing his praise to high heaven. They are all children of popular Alhaja Basirat Salawe, the popular “Oyibo Oni Potato“ fame in Lagos Island.

Hajia Jolade stepped out looking like a pack of diamond and rocking HoH luxury lace from Mrs Sokunbi, the Matron of popular Saudi Eko market. Her 18carat Gold worth was sitting pretty on her neck as she was ushered into the venue by a top Islamic singer. Alhaja Batola is also the best friend of popular Lagos shoe seller, Mrs Bimbo Pitan, the younger sister of Otunba Folasade Adesoye, the diamond merchant.

Don’t forget that, Hisbulai Missioners, Arisukuna is one of Lagos most respected Muslim scholar who is close to many Lagos super rich Muslims. The likes of King Wasiu Ayinde Mashal to mention a few are top members of the Group While Alhaja Jolade was been Turbaned as “Apase  Adinni“ of Hizballah,

While Hajia Jolade Batola was being Turbaned at the MARINA Car Park, another Lagos society woman, Alhaja Kafilat Oriyomi, the CEO of Bolkaf was being turbaned as the Iya Adinni of Hizbullah. on Sunday the 21st of April.  She was the cynosure of all eyes as she danced into the hall looking pretty in Joel and sons fabrics from the United Kingdom. Her pretty daughter, Hon Barakat Oriyomi who is a top Surulere politician danced in with her mother and her large guests to witness the big day.

It was Onions on Onions colour theme but lots of celebrities were seen rocking many of the Aso-Ebi colour of some of the other Owambes which shook Lagos that day. Mrs Atinuake Lounge, the CEO of Antilog fabrics was one of the many friends of Kafilat Oriyomi who made the event.

6 Celebrity Women Shut Down LAGOS In One Day With Their High Profile Parties was last modified: April 29th, 2019 by Abiola Orisile