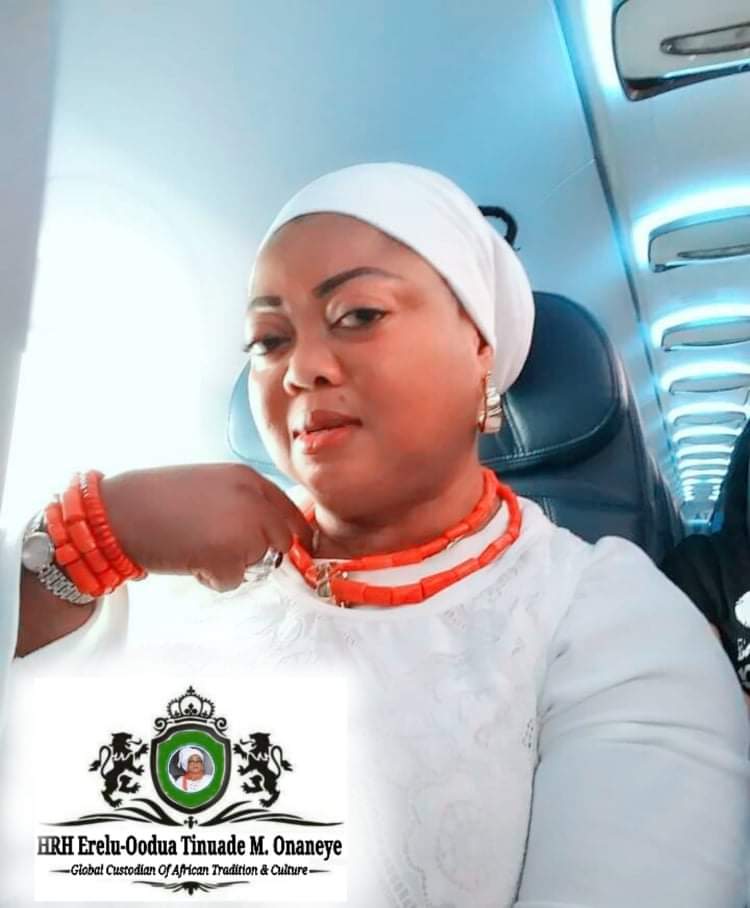 From the continent of Africa came a giant that wax great with each passing season, a veritable torchbearer of African traditional practices, a global custodian of Yoruba cultures, Erelu Tinuade Mabel Onaneye who turns 60 today. Turning 60 is not an unusual occurrence but for a woman variously described as an uncommon philanthropist, an icon of rare kind, a role model, a pathfinder, a woman with the heart of gold and a pillar of African traditional cultures, it’s a big deal.

Here’s a woman whose epithets and stories of her good works could fill a house. Her mantra, centred around making life better for the people, has continued to resonate loudly across her State of origin and indeed beyond. Yes ago, one Ms Comfort Adefulire, one of the beneficiaries of the free health care services carried out by a team of medical experts from Texas, United States flooded social media with posts eulogizing Erelu Tinuade, who brought the team to Ms Adefulire’s community in Irele, Ondo State. This and many others best captured the essence of Erelu-Oodua Tinuade Mabel Onaneye.

The said free medical service was first of it’s kind and was fully sponsored by this US-based businesswoman and philanthropist, who decided to take up the challenge of bringing free medical experts to Nigeria with more concentration on Ikale and Ilaje people of Ondo State who have been marginalized for so long and denied the genuine dividends of democracy most especially in the area of health care delivery. She started this in 2012 and it went on successfully till November 2016. Every visit was a huge success with many beneficiaries shedding tears of joys seeing how the wonderful team cured their age-long diseases and sicknesses. It was just too good to be true as everyone witnessed these August events, unlike the fictitious ones Nigerian government only announced in newspapers but were never carried out.

Asides the free medical services, there are several philanthropic gestures credited to this woman of virtue and substance. During Covid-19 lickdown, her relief packages for the aged and needies reached every home in her beloved Ode-Aye town and immediate communities. The Federation of Aye Students will remain eternally grateful to her for cash gifts to all indigenous students of higher institutions belonging to the association. We have equally heard of how she had consistently stood to render finacial assistance to other students at all levels who for one reason or the other couldn’t pay their tuition bills. Sources close to Erelu have repeatedly maintained she usually frown at the idea of making her activities in this regard public. Her private life guiding principle lies in words of renowned English Author and Philosopher, Albert Pine which says, ‘what we do for ourselves dies with us, but what we do for others and the world remains and it’s immortal.’

Her tenacity of purpose coupled with unquenchable thirst to leave the Nigerian society, most particularly her beloved Ondo people better than she met them is the reasosn her people would never stop seeking for her intervention anytime government failed them. It’s a known fact that many whose paths have crossed that of Erelu may have cringed,  recoiled or cried inside at one time or another when it suddenly would have hit them that this great philanthropist will not be around forever. Yes, nobody lives forever but footprints are forever. Her indellible legacies would never be forgotten. I wish more leaders and politicians will learn from this rare being, the beauty of selfless services and the imperatives of transcendental leadership.

Dear Ma, you sacrificed so much, you have  blessed so many lives, you have lived for others and haven’t depised anyone. The world is watching you. Many have been inspired by you to live and to dare. To stand and to stand firm. To give and to give even more. To uphold lofty ideals and observe the priceless principles. On behalf of my family, my team at Observers’ Reflection International and Metropolitan Mirror, I wish you a happy 60th birthday celebration. May God spare your life to do even more for humanity.

How Remi Awode Supported Me During My Reign As FIBAN President – Ace Broadcaster, Yemi Sonde