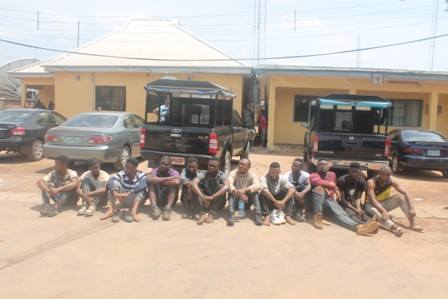 No fewer than 700 suspected cultists and 38 suspected armed robbers were arrested in different parts of Anambra in the last three weeks, Garba Umar, the state Commissioner of Police, has said.
Mr. Umar told the News Agency of Nigeria on Sunday in Awka that the arrests were clear signal that Anambra was no longer a safe haven for criminals.
“This number of arrests within three weeks to me was unprecedented and we will sustain the tempo until we flush out all the bad eggs in the state,” he said. He said that the police recovered several types of arms and ammunition from the suspects.
The commissioner said that some of the suspects had been arraigned, while the command was still investigating cases levelled against others. He said that additional personnel had been deployed in Anambra by the Inspector-General to beef up the existing security in the state. Mr. Umar said that the command had created 20 new units and deployed its personnel to various flash points across the state.
“I personally patrol some of these locations to ensure efficient operations. I am not an arm chair police commissioner. I move round myself to make sure that things are done the right way for security of lives and property of residents,” Mr. Umar said.
He warned those who were in the habit of operating in offices and residential houses, especially around the Government House, Awka axis, to desist.
He said that the command had set its dragnet in every location in the state; especially Awka, the capital, and that any person or group caught would be severely dealt with.
On extortion of money and other corrupt conducts by police officers, Umar warned them to shun such negative conduct, adding that corruption was viewed as a serious offence.
“I have read my riot acts to officers and men in Anambra State Police Command that under this administration of the present IG, there is zero tolerance to corruption.
“No police personnel can extort money from an individual or group and go free. We have the mechanism to checkmate the activities of our men; both the Inspector General and Commissioner of Police monitoring units are working hard.
“We gave out our telephone numbers to the public to report any case of extortion and act of incivility and misconduct to us.”
The commissioner also advised the people of the state to disregard threats by any group that the forthcoming Nov. 18 governorship election in Anambra would not hold.
“We learnt that there are some disgruntled elements making some pronouncements against the provisions of the Constitution of the Federal Republic of Nigeria that people should boycott the Nov.18 governorship election in the state.
“The group can say whatever they like, but the police and other security agents have a duty to secure the nation and as well ensure that the Constitution of the Federal Republic of Nigeria is protected.
“Where offences are committed; we will enforce the laws handed over to us for enforcement. We are ever ready to do that in Anambra and that is the fact.
“We have all the resources at our disposal to ensure that those who are eligible to vote perform their civic responsibilities without any molestation.
“And nobody within or outside the state can stop the exercise,’’ he said.
-NAN
700 Notorious Cultists and Deadly Armed Robbers Arrested in Anambra State was last modified: July 24th, 2017 by Arinze Ago