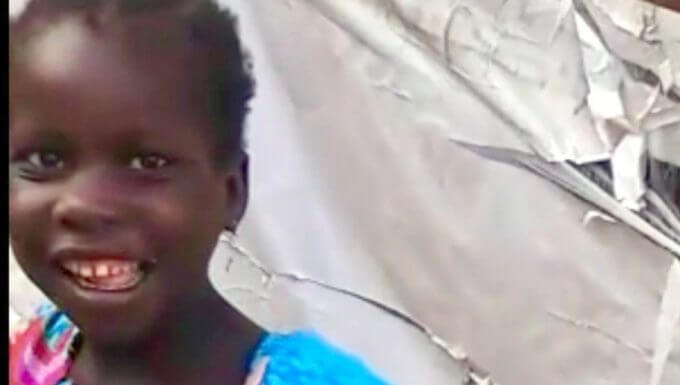 The Dalori-II Internally Displaced Persons, IDP, camp in Maiduguri is in a grieving mood following the death of an eight-year-old girl, Bana-Losoraye. She died and was buried last week Wednesday after she was diagnosed of HIV, the same ailment that killed her parents.

Bana-Losoraye is one of the many unaccompanied displaced children that fled their communities after Boko Haram attacks. Those familiar with her background said she came from a Madaya, a small agrarian community in Kumshe district of Bama Local Government Area.

Bama is Borno State’s second largest city. It was destroyed by the insurgents three years ago.

At the end of 2014 when Boko Haram stormed her community, her family and many other villagers had to flee to a bigger commercial village called Banki near the Cameroonian border.

After barely a week in Banki, her father who was diagnosed of HIV died. His condition worsened after the rigours and trauma of running through the bushes to evade the blade of blood-thirsty Boko Haram fighters.

The death of her father was a heavy cloud cast upon her promising future.

“Till she passed away, Bana-Losoraye often recall the memories of her late father and how he promised to put her in school. But his ill health did not permit him doing just that,” said one of the women in the camp.

PREMIUM TIMES learnt that the girl and her mother and grandmother had to move from Banki to Bama General Hospital which then doubled as an IDP camp. The other siblings – her brother and some cousins – remained in Banki.

“The idea of moving to Banki was to enable Bana-Losoraye’s mother and her grandmother who were very malnourished and looked sickly to have access to medications at the hospital in Bama”, Fatima Bukar, one of the women at the Dalori camp explained.

After their arrival, the mother did not get the expected medication and died almost immediately. It could not be ascertained if Bana-Losoraye’s mother had suffered from ill health associated with HIV.

“The grandmother too could not survive her malnourished condition; she eventually died about a month after the burial of Bana-Losoraye’s mother”, said Aishatu, one of the women who took over the care of the little girl.

When she came to the camp, the little girl who fell sick was tested and diagnosed to be HIV positive.

No one was sure how she contracted the disease.

Mrs. Bukar, one of the women who attended to the deceased girl, said before Bana-Losoraye died, she developed ‘strange sores’ on her eyes.

“She was sick for some time. But before she finally died, she had problems with her eyes, and before we could rush her to the hospital, she passed away on Sunday,” said Mrs. Bukar.

“We learnt that she has an aunt who lives in Cameroon”, said the Knifar Movement official.

The women said the girl was not getting regular medication for her ill health and her condition began to deteriorate.

“Bana-Losoraye developed some kind of illness on her eyes and as we rushed her to the hospital, she died”, said Mrs. Bukar.

“We think it may be HIV. And the poor girl suffered because it has been hard to get regular medication and healthy food here in the camps,” she said.

Efforts to get comments from the office of the Borno State Action Committee on AIDS to ascertain the level of the agency’s commitment to helping IDPs living with HIV/AIDS was not fruitful as officials there said they could not make comments.

The Borno State Commissioner for Health, Haruna Mshelia, informed PREMIUM TIMES in a telephone interview that the unfortunate death of Bana-Losoraye may not be unconnected with the attitude of some IDPs to hide their ailments.

He said there are functional HIV desks in all of the clinics within the camps, where pregnant women are screened and those living with the virus are given medications.

“It is very sad that we lost such a young girl to HIV”, said Mr. Mshelia.

“But you know, most of these people, especially those that are from remote rural areas, don’t respond to services like this. Our personnel have to go to their tent to force them out to collect drugs.

“Some of them would even hide in order not to be found. Sometimes when such a child is sick they would rather believe it is witchcraft and not a disease that needs orthodox medication.

“It is quite possible that poor girl’s case was hidden. If not, we have functional HIV services in all the camps including Dalori II IDP camp. But when you are dealing with illiterates one is bound to face these challenges.

“That is why we have local women that are trained to go into their tents to get those who need medical care out for help. But even with that we still miss some few cases. And for a small child of age 8, the illiterates would never believe she would have HIV,” Mr. Mshelia explained.