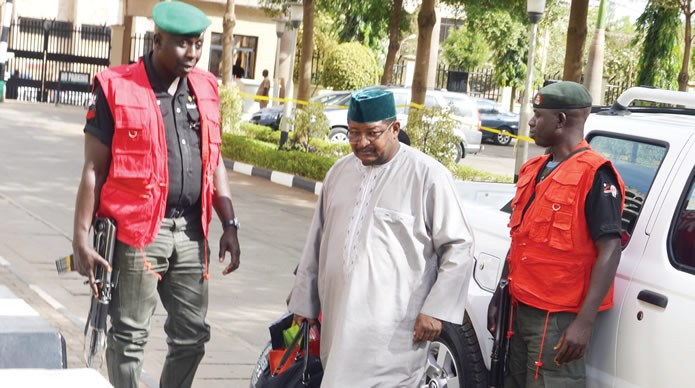 Operatives of the EFCC had on February 3 stormed a building belonging to the former NNPC boss and recovered a staggering sum of $9,772,000 and £74,000.

Following the raid, the former GMD on February 8 reported to the Commission’s Kano Zonal Office where he admitted being the owner of both the house and the money recovered.

Mr. Yakubu, in a suit filed through his counsel, Ahmed Raji, prayed the court to shield him from further investigation by the EFCC. He also urged the court to award N1billion against the EFCC and AGF, who was the second respondent, as damages and compensation, while asking the respondents to tender public apology in two widely published national dailies, for alleged violation of his rights.

However, the suit was struck out following a motion on notice for discontinuance brought by the applicant/respondent, Adeola Adedipe, from Mr. Raji’s Chambers.

In the application for an order of discontinuance, Mr. Adedipe said, “owing to the intervening circumstances, particularly because the charge has been preferred against the applicant before the court and has been admitted to bail. We consider it necessary to discontinue this action”.

He added that in a bid to secure an order striking out the case, they had sought the leave of the court by filing a motion on notice for leave to discontinue the action.

He urged the court to strike out the suit, having sought the leave of court as prescribed.

The applicant in its motion stated that, “the ground upon which this application was predicated is for the purpose of enforcing the applicant’s fundamental right to liberty and he has regained his freedom since March 21, 2017 owing to the criminal charge preferred against him and being admitted to bail. There is the need to discontinue because issues had already been joined and the suit is past heard”.

Rita Ogar and T. D. Agbe representing the first and second respondents (EFCC and AGF) respectively, told the court that they were served with the motion this morning and have no objection to it.

Justice Abang, in striking out the suit said, “Since none of the respondents is opposing the application, the prayer is granted. Leave is also granted for the purpose of discontinuance and the matter is struck out.”