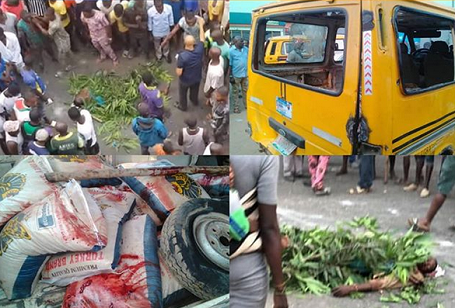 The body of the deceased was seen lying on the ground shortly after the incident while bags of rice that were smuggled were seen inside the danfo bus, with registration number Lagos/RKY/1953506.

Stains of blood was seen on the body of the bus and some bags of rice as well.

Irate youths burnt tyres and blocked the express road in protest over the killing.

Officials of the Rapid Response Squad, RRS and taskforce officials were however quickly drafted to the area to quell the riot while Armoured Personnel Carrier, APC was also deployed. At the moment the road has been opened for motorists to pass and everything seem calm