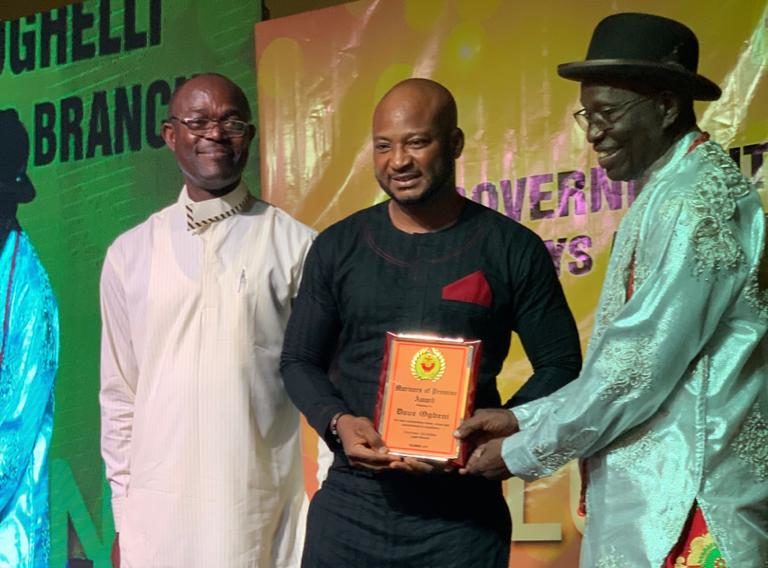 Popular movie actor, Dave Ogbeni was among the outstanding old students of Government College, Ughelli that was honoured a few days ago by its President Senior Mariner Sam Omateye.

According to him outstanding old boys who have distinguished themselves in their various endeavours and fields through individual or collective contributions to nation-building are recognised and conferred with awards during association’s luncheon party which holds at the end of every year.

For this year, only Dave Ogbeni and Prince Efe Duku, who is the Special Adviser on legislative and plenary matters to the Deputy President of the Nigeria Senate, and Efetobo Awhana, CEO of Avant-Garde Tours Limited made the list for the prestigious award.

The event took place at the Ballroom of the prestigious Eko Hotel & Suites, Victoria Island, Lagos.

Guests present at the event were His Excellency Babajide Sanwo-Olu, the Executive Governor of Lagos State, who also gave the keynote address, others are the Deputy Senate President, Barr. Ovie Omagege, Alhaji Aliko Dangote, Alhaji Ismaila Isa Futua, Festus Keyamo and lots of other dignitaries.

Why I Deliberately Chose To Be A Controversial Actress – Nollywood Star, ANITA JOSEPH