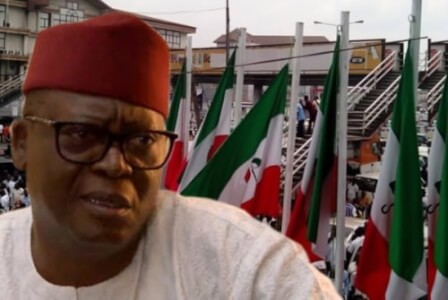 A governorship aspirant in the just concluded Ekiti Peoples Democratic Party (PDP) primary, Dayo Adeyeye, says he is defecting to another party.

Adeyeye, who polled 771 votes out of the 1,986 cast during the primary, made this known on Thursday in Ado-Ekiti.

The former minister of state for works said he would announce his new platform in the next 40 hours, saying no fewer than five parties have offered him their platforms to contest the July 14 governorship election in Ekiti.

The former PDP spokesman made the announcement shortly after consulting with his supporters on the next line of action after his loss of the primary election to Kolapo Olusola-Eleka, the incumbent deputy governor.

He alleged that the victory of Olusola-Eleka at the primary was merely to extend the tenure of Ayo Fayose, Ekiti governor.

Adeyeye alleged that the pattern of voting instilled fear in many delegates.

“Our party leaders in Abuja were surprised at my performance at the primary despite the intimidation but I told them that I can change party, party may go into extinction but Ekiti will remain.

“I will not, because of party affiliation, allow Ekiti to be destroyed. That is why we will take decision today on where we are going.

“What is paramount in my mind is to liberate Ekiti. Today, we will not reveal where we are going yet, but we are no longer where we were before.”