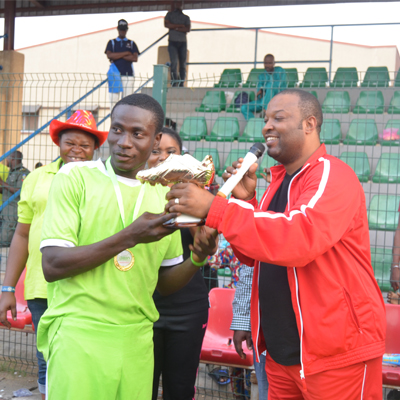 The memorable third edition of Adron games 2018 have come and gone, but the landmark achievement and accomplishments will remain in the minds of every spectator, participant, and winner at the event.

This year’s event featured track and field events for Adron workers, Landlords and Homeowners, Adron Contractors as well as Partners of Adron Homes and Properties Limited.

ADRON Games is an annual fitness and bonding initiative by ADRON Homes, a leading real estate and property development company in Nigeria, which brings many stakeholders together and promote fitness among the workers, contractors, homeowners and the public.

Speaking on this the event, the Group Managing Director of Adron Homes and Properties, Adetona Emmanuel King described Adron Games 2018 as an educational and integrating tool aimed at promoting fitness and healthy living.

He said: ”The friendships and bonding we make in the games will last much longer than the memory of a loss or a bad game. In 20 years you may not remember your team’s record, but you will remember the bonds you have formed by being a participant in the 2018 Adron Games.”

Adron young ambassador, Venessa Jones, and trending music act Small doctor also thrilled fans at the closing ceremony. The whole of Yabatech was lit in anticipation of the next edition.

Speaking with a cross-section of Yabatech students who witnessed the eventful games, One Sola Ameed, who could not hide his excitement, thanked the staff and management of Adron for choosing Yabatech as the venue for the event and hope to work with Adron once he’s through with school.

Different gifts were carted home by students of Yabatech during the event with tickets bought. The gifts range from freezer, air-conditioner, washing machine, iPhone, to laptop. The pan African real Estate company run by Oba Adetola Emmanuelking also fed everyone at the venue as earlier promised.