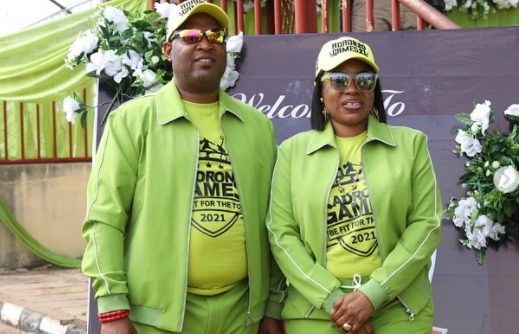 DETAILS OF DAY ONE

The opening ceremony of the 6th edition of the ADRON 2021 games was a pure show of entertainment and carnival that will remain in the memory of the spectators for years to come.

The fans who came out en masse to grace the opening ceremony were thrilled with wildly varied tastes of entertainment and sporting activities of a world-class level.

The colourful ceremony, which took place at the gateway international stadium, Sagamu, Ogun State, on Thursday, November 18, 2021, saw the high and mighty in sports at the graciously packaged event.

The yearly games which are put together by ADRON homes for its staffs nationwide is aimed at promoting and implementing a healthy workforce, while also enhancing unity and bonding amongst members of staff

The sporting event which was officially declared opened by the GMD of ADRON homes and properties said this year’s event will be a special one, aimed at promoting and implementing a strong healthy workforce, which is very key to a successful business or organisation.

“Sports is very powerful tool that unites the world and it is very inevitable in every sphere of life, that is why the ADRON games are very important.

“The ADRON games, will continue to grow bigger and stronger every year and in future; be like an Olympic event” he stated.

Meanwhile, the parade which is the highly coveted event with a cash reward of One Million Naira was contested by eight teams representing the company nationwide. Members of staff across the country, thrilling fans & supporters with delightful performances and displays.

Meanwhile, the women’s soccer competition kicked off with the Eko continent beating the Western continent 2-0, while a novelty game between Remo North and Sagamu utd ended  2-1in favour of Remo north.

The Oganla of Fuji, Wasiu Alabi Pasuma stormed the stage after day one sports activities to thrill the fans and spectators. He also gifted cash prizes to his fans in the spirit of the Adron Games.

Day 2 of the 2021 ADRON games continues today at the gateway international stadium, Sagamu, Ogun state with over 15 games lined up to treat audiences and fans.

WHY WE ARE ORGANISING NIGERIAN MUSIC LIVE BAND COMPETITION IN DECEMBER