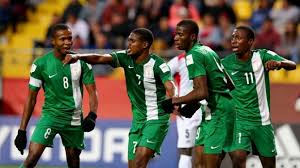 Nigeria Flying Eagles will play their final group game at the ongoing U20 Africa Cup of Nations against host Niger Republic on Friday.

Coach Paul Aigbogun says his squad will focus on scoring goals that would give them victory and earn Nigeria a FIFA U20 World Cup ticket.

“This is our most important match of the tournament so far. There would be no looking back. We are playing the host team but our minds are made up to go all out. Only a win can guarantee us a place in Poland.

“Of course, we noticed a few things in the first two matches we played. The corrections we have made would help us greatly in Friday’s match.”

The Flying Eagles have to be at their very best against a home team that requires an outright victory as well to be in with a chance of qualification, as they trail Nigeria by two points and are level with South Africa.

Needing the minimum win possible to snatch a World Cup ticket early when they took on South Africa on Tuesday, Aigbogun’s wards made hard work of it, with the match ending 0-0, rather handing the Amajita a chance to remain in the tournament if they overpower Burundi in Maradi on Friday.

Thursday’s training session was high on ball work and diligence.

Goalkeeper Olawale Oremade is likely to keep his place between the sticks, as defenders Mike Zaruma, Ikouwem Utin, Igoh Ogbu and Valentine Ozornwafor. Their alliance is still unbreached in the championship.

Jamil Muhammad and Afeez Aremu could remain in the midfield with Alhassan Adamu in front of them, though Aigbogun may tinker with the strike force, with Ibrahim Abubakar, Aliyu Ibrahim, Nazifi Yahaya, Effiom Maxwell, Adeshina Gata and Sweden –based Onyekachi Paschal all in good shape.

The Group A is delicately poised and goes to the wire. With four points, Nigeria top the pool ahead of Niger and South Africa, with two points each, while Burundi has only one point.

A draw against the Junior Mena would see the Flying Eagles through to the semi finals and a spot at the FIFA U20 World Cup in pocket, and in this case victory for South Africa over Burundi would also see the Amajita through.

Yet, victory for the host nation over Nigeria, and victory for South Africa against Burundi, would eliminate the seven –time champions. Also, if Burundi secures a high-margin win over South Africa, and the Junior Mena overpower the Flying Eagles, Niger Republic and Burundi would go through to the last four and to Poland.

Coach Aigbogun and assistants have the benefit of having played the Nigeriens previously. Both teams fought to a scoreless statement at the WAFU Cup Tournament in Lome, Togo in December 2018. And on Tuesday, following their 0-0 draw with South Africa, Nigeria’s technical team stayed behind at the Stade Seyni Kountche to watch Burundi come from 1-3 behind to draw with the Junior Mena.

The Flying Eagles have an extra motivation to put on their best on Friday, as officials confirmed that Super Eagles’ Technical Adviser Gernot Rohr would arrive in Niamey in time to watch the clash with Niger. Rohr has promised to include one or two of the Flying Eagles in the senior team’s squad for the 2019 AFCON qualifier against Seychelles and the prestige friendly against Egypt, both coming up next month.