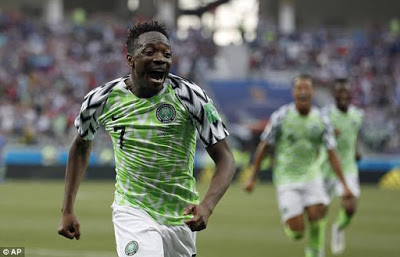 Ahmed Musa is basking in confidence to score again for Nigeria ahead of tonight’s crunch clash against Argentina.

Recall Musa scored the two goals that gave Nigeria victory over Iceland in the Group D fixture of the ongoing FIFA World Cup in Russia.

The Leicester City forward reckoned that he has always scored against the Argentina national team and Lionel Messi, stating that he has a target to continue his scoring streak against the La Albiceleste today.

He said, ‘Whenever I play against Argentina, or whenever Messi is playing against me, I score. Four years ago I scored two goals. When I transferred to Leicester City and we played against Barcelona I scored another two goals, so I think in the next game anything can happen. ‘Possibly, I’m going to score another two goals.’