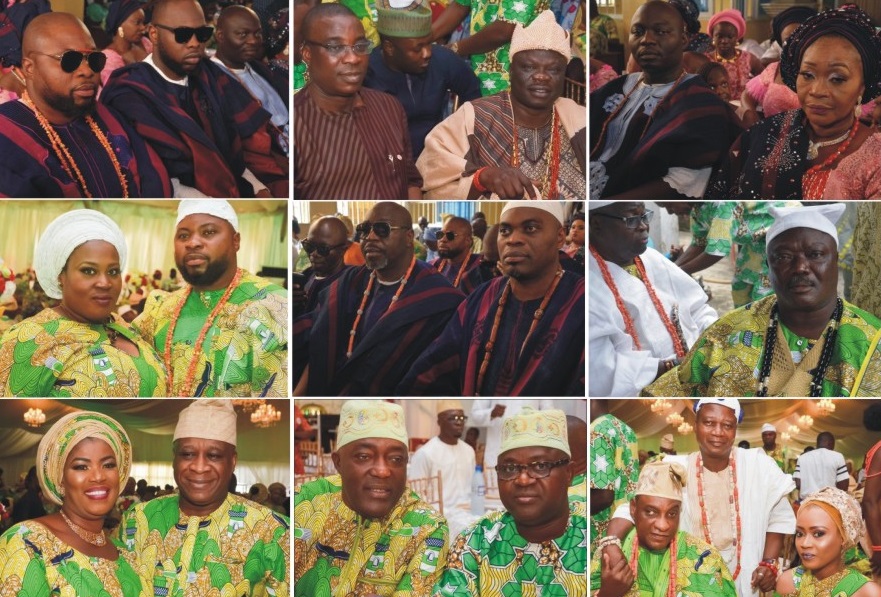 On Thursday 3rd and Friday 4th, May 2018, family, friends and well-wishers of Akinsiku of Lagos, Oba Olalekan Dosunmu and his siblings gathered to celebrate the life and times of Late Pa Albert Olaribigbe Dosunmu, popularly called Baba Agbalagba who slept in the Lord at the age of 80. It was an event which was attended by first class monarchs, important personalities and celebrity big boys and babes. The Wake keep took place on Thursday at the Greetings hall, Yoruba Tennis Club, Lagos Island followed by a Church Service on Friday at Methodist Church of Nigeria, Obun Eko with a classy reception at the Queens Park Hall, Oniru, Victoria Island. City People Society Editor, TAYO FAJORIN OYEDIJI(08111811219) covered the party.

WHY BABA AGBALAGBA WAS SO POPULAR

Fondly called baba Agbalagba, late Pa Albert Olaribigbe Dosunmu is very popular in Lagos Island because he was born and bred in Isale Eko, Lagos island. He is also the Elder of Awe Adamu Orisa Eyo family which is the senior group of all the Eyo family groups. He is well loved in Lagos Island and one of the staunch members of Methodist Church of Nigeria, Obun Eko Circuit.He was born on the 18th of October 1937,his parents were late Chief Ebenezer Olayinka Dosunmu,late Akinsiku of Lagos and madam Omokehinde Dosunmu. Pa Albert was the 3rd child of his parent, he had his primary education and later joined NEPA in 1958. He worked and served for 30 years before he retired in 1988.He is married to Madam FlorenceAlaba Dosunmu and Madam Abimbola Dosunmu. He was blessed with 9 children,many grand and great grand children.He was a member of Yoruba Tennis Club.

Methodist Church of Nigeria, Obun Eko, Lagos Island was in charge of the funeral service for Pa Albert Dosunmu. He was a staunch methodist till he died and no wonder why many top hierachy of the church came out to give papa their last respect.The service which started at 11am was presided over by Revd. Olu Ade Famose, Presbyter and minister in charge and Reverend J.O Adeogun, the bishop of Ereko  joined by other circuit ministers of God who took part in the order of worship.

HOW BABAS CHILDREN STOOD OUT

All of Babas children were at the party, they were led by Babas only surviving wife, Madam Abimbola Dosunmu popularly called Iya ‘Dewunmi. All the Dosunmu children were up and doing at the event. The deceased had 7 sons and 2 daughters.The daughters are Princess Olaide Jenmi who is a business woman on the Island who deals in wedding gowns and Princess Olaitan Dosunmu-Ajike who works with Okuobi Medical Centre. The sons are Prince Bolaji Dosunmu who lives in Canada,he is a system analyst. Prince Lanre Dosunmu is a retired navy officer who is into oil and gas.Oba Olalekan Dosunmu,the Akinsiku of Lagos, Prince Tunji Dosunmu is a real Estate expert while Prince Olabode Dosunmu and Prince Adewunmi are both top officials at Lagos Inland Revenue Service, LIRS and Prince Segun Dosunmu lives in the US. Hundreds big boys stepped out at the party to honour all of them.

ALL THE 5 SENIOR EYO GROUPS On DISPLAY

It is only expected that there will be a traditional display of Eyo Masquerade since the deceased was once the Akinsiku of Lagos and the elder of the Adamu Orisa group, the most senior of the Eyo group and his son Oba Olalekan Dosunmu is the present Akinsiku of Lagos. All the 5 Eyo groups came out at Lagos Island around Baba’s residence to pay their last homage to one of their own. They did a special cultural display by walking round some major streets which is a tradition they observe for any chief or Oba who passes on.

It was one of King Wasiu Ayinde’s happiest moments doing what he loves to do. Whenever he is in the midst of his friends, fans and allies, his music is always different. He knows what to sing, what to say and how to actually get everyone on their feet dancing. He sang praises of all the guests and it was a show of endless naira rain sprayed on him.

Aremo Segun Oniru’s disposition at the party will surely tell you he has huge leadership qualities. He was seen from the beginning of the party till the end making sure he is fully on ground to support his brother.Yes, he is an elder brother to Akinsiku of Lagos and they are related through the Dosunmu royal dynasty. Many people always see them together but they don’t know they share a close friendship because of the bond between them. He practically took on the responsibility of a big brother and received Akinsiku’s older guests and some first class monarchs. His brother was also at the party and his mum,Olori Aramide Oniru, sat on the VIP table too. Olori is the head of all the wives, she is the Iya Aafin of Iru Land.

It can only be the Akinsikus that will stage this kind of party and there will be an overflow of big boys.The party had in attendance over 500 big boys who stormed the Queens Park Hall. He is a loving and nice person and always support all his friends.This party was surely a pay back time for him as many not only came, they wore the aso ebi, sat for many hours, sprayed and danced with him for long hours. The hall was filled to the brim.Sighted were Lagos big boy and wealthy socialite, Hon Sati Ramoni Salawe who stormed the party with his entourage of big boys, like Alhaji Basirat Akinnusi Akinsemoyin,Hon Femi Pitan,Ope Fashola,Saheed Omotoso,Famous Arizona,Muiz Omo Sati,Eldorado boss, Bolaji Esho,Alhaji Yakubu Sasore, Fuad Oloto,Taiwo Quadri,Wasiu Aroworowon,Alhaji Lateef matti,Hakeem Sanni,Otunba Adegboyega baba Ajo,Rasheed Muri Okunola, Jibola Williams,Oyekanmi Elegushi, Hon Bashir Bolarinwa, Deputy Speaker of Lagos, Wasiu Eshinlokun,Chief Layi Amoje, Fmr sec, Tunde Adeniji Adele, Phillip Adenekan, Wale Oladapo biggies, Lukman Olatunji Adebiyi, Lukman Akinyemi, Abolore Irawo and many others.

Super big babe, Lara Badmus who runs one of the thriving fabric stores in Lagos Island, Laviva fabrics was contracted to supply all the gold and green mix of Ankara aso ebi close to 4000 pieces that the guests wore. She is not just a friend to the Akinsikus, she has become like a darling sister to them. She was up and doing at the party, she was incharge of most of all the things.She also had her tables where her friends sat and wore same outfit with Olori Noimot Dosunmu.

One beautiful woman who stood out amongst all was Olori Noimot Abimbola Dosunmu. She is the pretty wife of Oba Olalekan Dosunmu,the Akinsiku of Lagos.Gorgeous, sweet,lovely,elegant are some of the best words to describe her.She shone like a star at the ceremony with her style of outfits.She wore a pink lace matched with the royal blue/pink aso oke for the church service and embellished it with millions of Swarovski stones. The dress was well fitted on her hour glass figure and she changed into the ankara aso ebi later at the reception. Everyone gravitated towards her and were seen dancing and exchanging pleasantries with her. Do we need to tell you what jewelry she rocked with her outfits,it’s a luxury precious gold jewelry which is a limited edition.

The queen of juju music, queen Ayo Balogun is a big sister to the core. She enjoys a beautiful sister to brother friendship with the Oniru’s and the Dosunmus. She was a guests of Akinsiku of Lagos and played a sisterly role at the party. She was sitting on the same table with Aremo Segun Oniru and other important guests.

These 2 sets of princess are both beautiful, they are the children of Elder Albert Dosunmu and the only 2 daughters as well. They led all their 7 brothers at the burial arrangements and were seen saddled with one responsibility or the other at the reception. All their friends also came around to celebrate the life and times of their father.

Popular and wealthy socialite, Hon Sati Ramoni Salawe stormed the party with his entourage and immediately he sat down, many big boys gravitated towards him.He is well loved amongst Lagos big boys and has been a constant recurring decimal for musicians as they praise sing him.He shares a big brother friendship with Akinsiku and no wonder he srayed him silly. The one time London based big boy’s table bubbled with exotic drinks all through the event.

At the party were super music stars, Dbanj and Tiwa Savage who honoured Akinsiku. It was a special appearance for both of them as they mouned the stage to dish out some melodious songs.

OVER 10 ROYAL OBAS WERE THERE

The members of popular Lagos Island social club,Yoruba Tennis Club were fully incharge at the party. They were led by their Chairman, Professor Adetokunbo Fabamwo. Baba is one of their bonafide members and that was why the wake keep took place at the Club’s Hall.

AKINSIKU Of LAGOS & Siblings Bury Dad Gists From The 2 Day Event was last modified: May 13th, 2018 by Tayo Oyediji