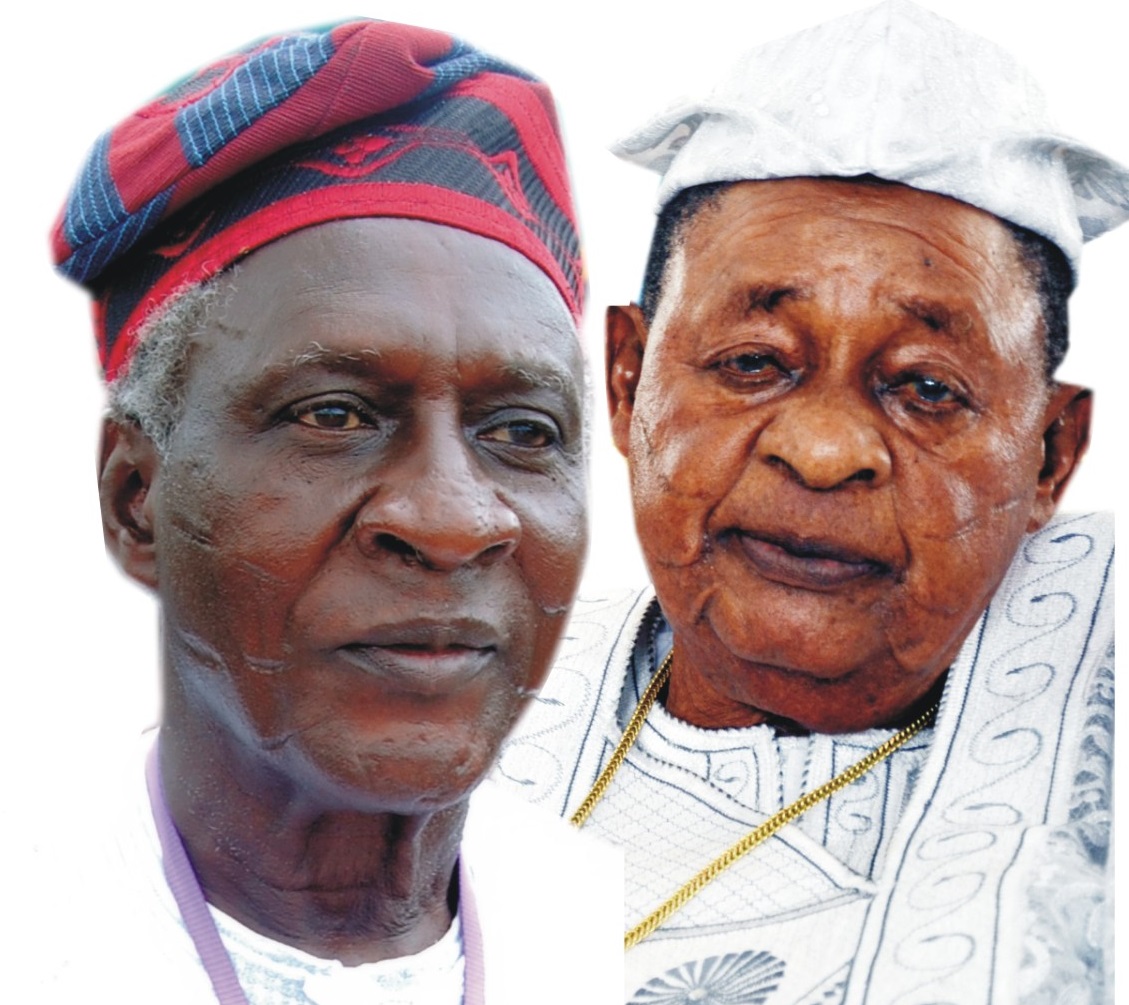 The Alaafin of Oyo, His Imperial Majesty, Oba Lamidi Olayiwola Adeyemi (III) and Archbishop Ayo Ladigbolu are cousins. But many people don’t know. They are just seen as friends. On June 27th, 2018, Archbishop Ladigbolu turned 80 and the Alaafin wrote a beautiful article in honour of the Most Rev. Ayo Ladigbolu. It is very revealing. Below is the full text of the write up.

(1) In 1938 Oba Siyanbola Onikepe, the eldest son of Oba Lawaru Amubieya, had reigned for twenty eight years (1911- 1938) when his son and one of the apples in the Oba’s eyes, Prince (Alhaji) Akee Obayanrintan Apewo Ladigbolu and Aya Omoba Aderonke got their baby boy, the grand son for the Oba, Prince Sanda Ayoade Ladigbolu

(2) Prince Lawrence Sanda Ladigbolu spent the first fourteen years in the Koranic and Arabic School before entering the L.A. Primary School, lsaie-Oyo at the age of fourteen in 1952. He got double promotion twice at L. A. Secondary Modern School Durbar, he drstinqurshed himself in football. Cultural art production and these activities were already putting him on the map of Western Regional Festival of Arts and Culture in 1958.

(3) Prince Ayo Ladigbolu had a very close encounter with Jesus Christ in 1967 and the issue caused a stir in the community. His vocation and total direction of life changed and this resulted in a sudden reaction to the way the Prince was accepted in the community. Friends and even family members rejected his new way of life as they were angry and aggrieved; but the grace and mercy of God sustained him through out the turbulence.

(4) In quick succession, he encompassed the stages of his Christian early life

(i) He was admitted to the United Missionary Theological College, Borin 1963

(iii) He contributed to Aworerin, Radio Elwa, and the Nigerian Christian to sharpen his journalism potential

(iv)        In 1970, he secured admission to train as an ordained priest of the Methodist Church in Immanuel College of Theology and Christian Education, Samonda, Ibadan.

(v) The most Rev. Ayo Ladigbolu left Nigeria in 1973 to study on Scholarship at the Southern Methodist University, Dallas Texas. He earned degrees in Theology and Mass Communications.

(vi) When Arch-Bishop Ayo Ladigbolu retuned in 1977, he served as the Principal of the Methodist Theological Institute, Sagamu until 1984.

(I) I have found an un-common attitude of service to the throne of the Alaafin, wh ich in ordinary life; when two Princes of the same age come from the opposite side of the alternating trajectory of Atiba dynasty, aloof-ness is usually the stance; but this evidence is not allowed to rear its head; but, affinity, closeness, affection and loyal service issue from the character of the arch-bishop in all his dealings with the Kabiyesi and the Alaafin Throne; Prince Ayo Ladigbolu is remarkably a redeemed soul.

(ii) Patriotism is another mark of a man of God and a Prince of every kingdom. He operates on the highest and fastest speed to ensure infrastructure, and development units are recorded in Oyo to make up for locust years when these things have eluded us. I see this passion and persistence in the Arch-Bishop and I must confess, no one has beaten him in the race and contribution for our development and aspiration.

(iii) Loyalty: One can feign a fellowship. One can laugh and smile, while the opposite is what is burning in the heart. But a loyal person, who has an option of aloof-ness, and an obvious option of using religion as a ploy to ensure his distance to the Alaafin; but has decided to embark on a thorough and dedicated path of loyalty, respect and admiration for the person and throne of the Alaafin: this hall-mark ofloyalty has put my estimation of the character of the arch-bishop as one hundred percent refined and excellent.

(iv) Archbishop Ayo Ladigbolu is urbane, educated, cosmopolitan and a great theologian. When the mother of his Grace the Rev. Dr. Samson Adeniyi Ayokunle, the President, the Nigeria Baptist Convention and the President Christian Association of Nigeria died in 2016, it was Archbishop Ayo Ladigbolu, who preached before the National congregation. My presence in the service made me to appreciate the urbanity, the social history where the contribution of Efusetan of Ibadan and the Polo / Pala resistance of Mrs. Ransome- Kuti to the Alake of Abeokuta in these years were used as illustrative sinews to a great sermon delivered in delicate English nuances with theological concepts.

(v) Miscellaneous Contributions: His contributions to Oranyan Festival since 2012 is a great exploit. His Chairmanship of Oyo Metropolitan Development Association has served as a social bridge for development in Oyo and Afijio.

The social angle to his contributions is firmly directed to the poor handicapped members of the society in Durbar and the H.I.V and Aids Victims in Oyo. They have found succour in the contribution of Arch-Bishop Ayo Ladigbolu. Our subject is now 80 years old. As the Alaafin, this Prince, this cousin and an arch-bishop qualified for my praise and prayer. I pronounce that the prayer of King David in His Psalm 1 verse 3 will be your portion. “That person is like a tree planted by the stream of water, which yields its fruits in season and whose leaf does not wither-what ever they do prosper”. Amen.