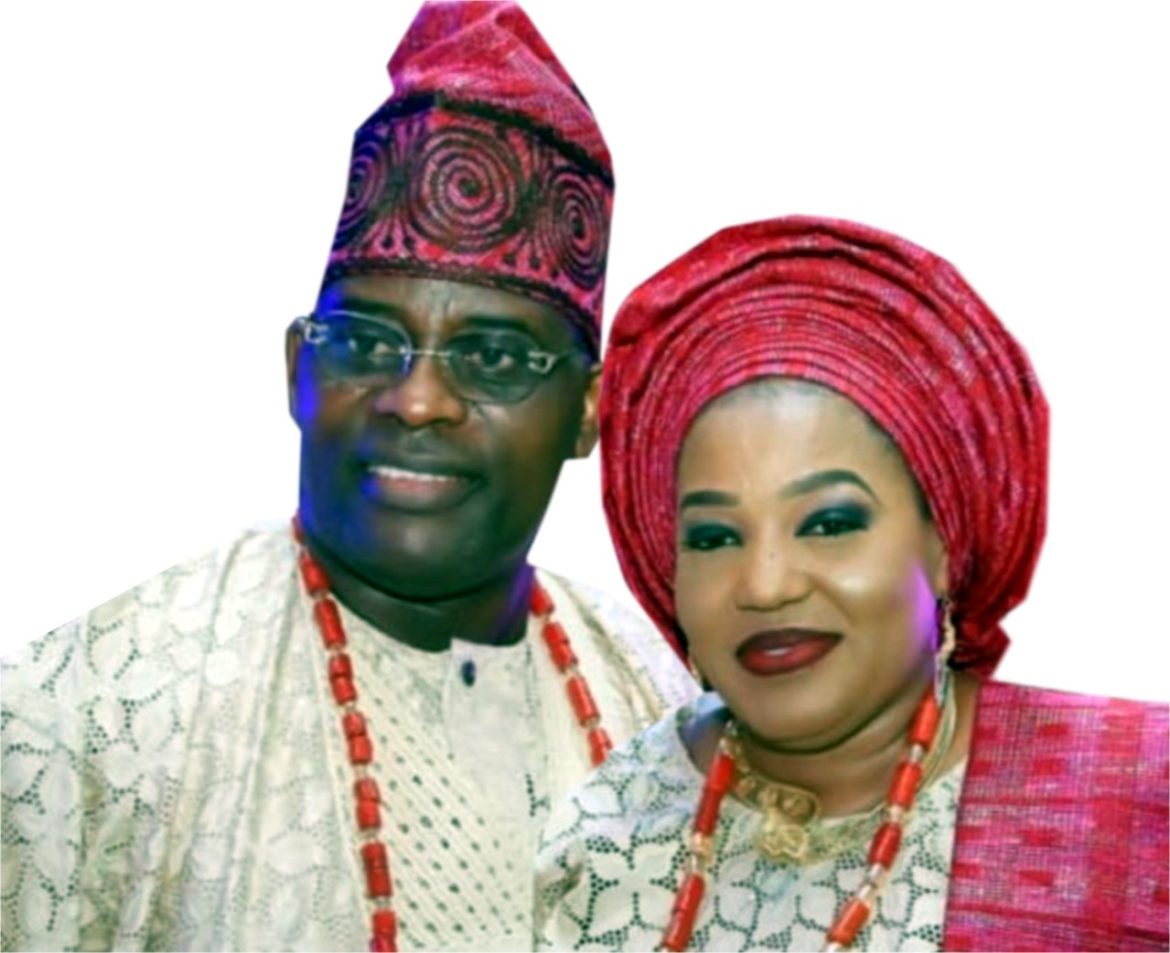 Alhaji Hon. (Chief) Abdul-Sobur Olayiwola Olawale the lawmaker representing Mushin Constituency 2 at the Lagos State House of Assembly is a distinguished member. He is popularly called OMITITI. At the last general elections, which was adjudged as one of the most keenly contested elections, OMITITI was given the 2nd largest vote in Lagos, after Alimosho, beating his closest contender for the Mushin constituency 2-seat, by an incredibly wide margin.

This didn’t come as a surprise to many who know how much he has done for his Mushin people in terms of bringing to them the dividends of democracy. This explains why he is hugely loved by all and sundry in his constituency. He is serving his 2nd term. He served in the 8th Assembly and he is in the 9th Assembly and he has remained a force to reckon with.

The big news is that come Saturday, 20th November 2021, he and his beautiful wife Chief (Mrs.) Shakirat Abosede Olawale will be honoured by HRM Oba (Dr.) Adedotun Aremu Gbadebo (CFR), the Alake of Egbaland at his Ake Palace in Abeokuta.

Let’s tell you a little about Sobur Olayiwola Olawale. He was born 12th March 12, 1964. He is the member representing Mushin Constituency II at the Lagos State House of Assembly and Chairman of House Committee on Local Government Services.

Olayiwola Olawale grew up in Abeokuta where he began his education at St. Peter’s Primary School in Ake, Abeokuta, Ogun State. He proceeded to Nawair-ur-deen Grammar School Obantoko, Abeokuta for his secondary education. His quest for knowledge took him to the Ogun State College of Education (Now Tai Solarin University of Education) and University of Lagos, Akoka where he gained National Certificate in Education (NCE) and BSc. in Business Administration respectively. He later got a master’s degree in Public Administration from Lagos State University.

He started his career with Ajebo Community School as a classroom teacher from 1986–1995. He had a stint with Asotrade Nigeria Limited as operations manager from 1995–1996. And in 1996, he established his own company, Ya Sobur Ventures, where he was the Managing Director and Chief Executive Officer.

Following his decision to join active politics, sometimes at the dawn of the 4th Republic, Olawale was the Ward Secretary, Alliance for Democracy, Ward G2, Papa Ajao Mushin, Personal Assistant to Honourable Commissioner, Lagos State Ministry of Transport from 2000–2003, President, Ganiyu Solomon Campaign Organisation, Mushin LGA in 2002, Youth Coordinator, Afikuyomi Senatorial Ambition, Lagos West in 2002, Special Assistant on Transportation to His Excellency, Asiwaju Bola Ahmed Tinubu (Governor Emeritus, Lagos State) 2003–2007. In 2014, he was nominated and won the primary of the All Progressives Congress and was elected as a member to represent Mushin State Constituency 2 at the Lagos State House of Assembly, and was re-elected in 2019 for another four-year term.

When City People interviewed him not too long ago, he revealed how his journey has been. “Well, let me say the journey has been smooth. It has been rosy. It has been rosy because I understand the pains of my people. You see, he who takes it, feels it. My people know that I am at home with them. I know their problems and they know I do all within my capacity to address those problems. It may interest you to know that I give the widows N5000 each, and am talking about two hundred widows across the wards in my constituency every month.

To some people, this might seem very meagre, but when you look at the total number of widows that benefit from this, then you will appreciate what we’re doing. And my constituents, most especially appreciate the gesture. I have been doing that since June 2nd, 2002. When it comes to empowering my people, they know that me, Hon. Olayiwola Olawale will do everything within his power for them. I also empower them by training no fewer than 50 graduates on how to do make-up head gear tying.

As for Education, I identify with both the teachers and students of my constituent. There are some we give free school uniforms to, there are some we give writing materials to. Just this second term, I have bought two school buses which are used to convey our students free of charge in the morning and afternoon. And a whole lot of other good things. I always ensure that give them feed backs, using platforms like our stake holders meeting to give a rundown of all that I’ve been able to do in the last couple of years.”

He has been in office for about 6 years now, what is his overview of his experience in office so far we also asked?

“I would say that the 6 years that I’ve spent in the Lagos House of Assembly have been an extremely humbling period for me. Many waters have passed under the bridge. We have really entrenched ourselves and gotten a firmer grip on our constituency. Unlike before when we were just learning the ropes, now I can tell you that I have learnt a great deal within the last 6 years. I have moved a handful of Motions on the floor of the house. Some of the Motions have to do with the completion of the road in Mushin to Daleko axis of my constituency. I also remember that I moved a motion that has to do with Awolowo market. The road was in pretty bad condition then. Twice, I moved the motion and the governor responded and effected the rehabilitation of the road. I also moved a motion on the invasion of Akala area by policemen. The Police had a clash with the people of Akala and they moved down to my constituency and several innocent people were arrested. People were arrested in Ilasa, Ijesha, Itire, Sadiku and some parts of my constituency. And I waded in, and with the intervention of the Attorney General, those who were arrested were released. I also moved a motion to condemn the act. I can also tell you that when it comes to quality representation, I have really represented my people very well and as regards the oversight functions, we have been doing that very effectively.

What are some of the things he has done for his people in the past few years.

“We have done quite a lot. Let me start with Health. We understand the importance of a healthy environment, so in conjunction with Rotary International of Agege chapter, we sensitized our people and gave them materials to enable them kick malaria out of my constituency. I gave out uniforms to students of Igbo-Owu Secondary School. I gave out uniforms to students of Community Grammar school and same with students of Euba Secondary School and Community Secondary School. Every year, I gave out 200 GCE forms to my constituents and that has been our tradition. The fourth edition was held last year. Apart from giving out forms, we ensure they are well tutored and we guide them as well. We also buy JAMB forms for them. There is also the OMITITI Unity Cup competition that gets the youth in my constituency actively engaged in sports. There is a free computer training institute where I teach our students how to become computer literate. During the festive periods, we usually take care of our constituents too. It’s on record that I’ve always been consistently giving out nothing less than 250 bags of rice every festive period, whether it is Ileya or Xmas. We do this because we appreciate our people and we believe they are very important to us.

How did he see the massive votes he recorded during the last elections?

I’m not surprised that my people voted for me enmasse. I’m not surprised that they gave me the second largest vote in Lagos State after Alimosho. It really shows that they appreciate what I’ve been doing. They appreciate the efforts and unrelenting attitude I’ve always put in all my activities. They appreciate the educational developments that I have brought about in my own little way. It’s in my constituency that students enjoy free school uniforms. We give out free GCE forms, free JAMB forms and so many other educational programs that have moved our people from where they were to a better place. And I can also boldly tell you that it’s not only in the area of education that we have done a lot, in the health sector too we have tried our best. We provide malaria materials to kick away malaria out of Mushin. We also had programs on make-up, to enable our ladies to become self-reliant. Not only that, we also empower them with the materials with which they would start up on their own. All of these have gone a long way to make my people stand solidly behind me. The votes that I had was quite fantastic, close to 25,000 people voted for me. That’s not a mean achievement, it’s something that I will always appreciate the electorates in Mushin Constituency II for. I appreciate them and they know I will continue to work assiduously for their benefit.

Help! Sex With My Husband Is Miserable