Home News Alert: My Experience As Waiter Made Me A Good Thief- Suspect
News

Alert: My Experience As Waiter Made Me A Good Thief- Suspect 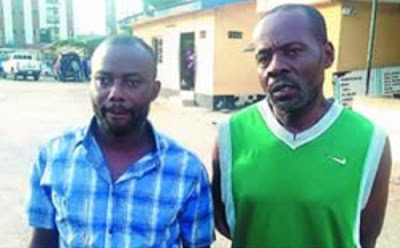 For the last three years, 38-year-old Augustine Joseph and his accomplice, 49-year-old George Ijie, had targeted event centres in Lagos, in a stealing spree, which the police put a stop to recently.

Saturday Punch learned that the duo had at different times hit event centres in the state pretending to be ushers, journalists or guests.

Joseph in his statement to the police explained that his life of crime started in 2013 after he lost his job with a construction company and tried to find another job without success.

The father of two explained that he worked in a hotel in Ajao Estate after he arrived Lagos in 2009. According to him, his work as a waiter in the hotel would later prove useful.

He said, “Based on the experience I had as a waiter while working in the hotel, I started attending conferences and would pretend to be one of the waiters at the event. I used the opportunity stealing mobile phones from guests at events.

“I was also stealing expensive wines used to decorate high tables of such events and selling them off. When I noticed that many organisers of events easily became suspicious of me, I switched to pretending to be a journalist.

“I operated alone but I noticed that there were many thieves who operated like me. When I got to some events, and the organisers announced to guests to secure their belongings because of thieves, I would leave to avoid getting caught.”

According to him, he usually approached some unwitting guests who use their phones to take photographs and offered to help them take the snapshots. But once their faces were turned, he disappeared with their phones.

According to him, he also adopted the approach of moving about event centres with mobile phone chargers.

He said, “I would ask guests if they wanted to charge their phones. And since they would think I work at the centre, they hand over their phones and I run away with them.”

However, Joseph and his friend, Ijie, were nabbed by the Inspector-General of Police Special Intelligence Response Team after stealing the mobile phone of a journalist on Victoria Island, Lagos.

A source stated that when the journalist reported the theft of her phone to the police, investigation showed that Joseph was captured by one of the CCTV cameras of the venue.

The mobile phone was tracked and traced to the Computer Village in Ikeja where Joseph sold it.  The buyer was arrested and subsequently led IRT operatives to Joseph’s hideout.

Shortly after, he confessed to working with Ijie, whom he described as one of his buyers and a specialist in stealing video cameras and laptops from event centres also.

Ijie, 49, who is also a Delta State indigene, told the police, “People are careless.  They leave their laptops and mobile phones carelessly on the table at events. People like that are the ones we target.

“I have a registered company known as Systems X Limited where I repair laptops.  I was arrested because I was dealing with Austin, whom I met through one Aliyu three years ago.    I have bought a stolen laptop from Austin.  I have also stolen laptops and cameras at press conferences and seminars across Lagos.  I have stolen over 40 laptops since I started doing this.”

It was learnt that Ijie had previously been nabbed for stealing a laptop belonging to one Moruf Aregbesola, at an event centre in Lagos.

Like Joseph, he was also caught through a CCTV footage, which showed him leaving the scene with the laptop.

“Three laptops were eventually recovered from me at the time and I was charged to court but I was granted bail and when I came out, I stopped doing the business. Two weeks ago, I received a call from Austin who is a member of our syndicate and he told me that he had a laptop to sell, I was arrested when I came to take the laptop from him.”

Alert: My Experience As Waiter Made Me A Good Thief- Suspect was last modified: June 3rd, 2017 by Reporter