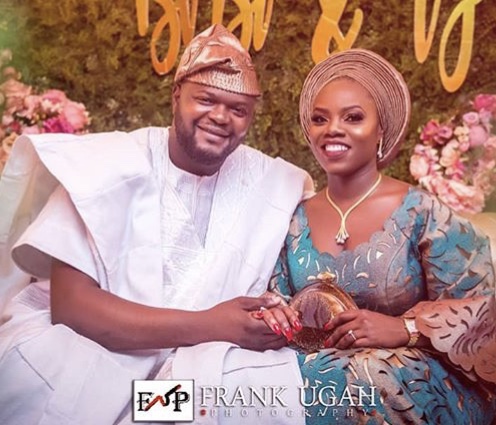 Civic Centre in Victoria Island on Wednesday 4th of July 2018 was filled with important personalities from all walks of life as Tajudeen Iyanda, son of Ilorin Lagos based billionaire, Alhaji Umar Saro wedded in grand style. Tall and lanky Tajudeen said I do, to his longtime beau,  Bibire Omobolanle Martins, the beautiful daughter of Deacon Omolaja Martins and Omokehinde Martins.  The event was a 3-days affair as the grand reception later took place at the Balmoral Convention Centre on Saturday 7th of July at Federal Palace Hotel, Lagos. Though the Friday Nikkai was a family affair but City People Assistant Society Editor, ABIOLA ORISILE (08038477798) was at the engagement to bring you gist while Photo Journalist, FEMI ADELEKE captured the event in pictures.

WHY MANY LOVE THE SAROS

Talking about one family that is well loved on Lagos social scene, you will certainly be told that the Saros are one of them. They are not just super rich; they are one of the most loved Lagos families. Though Alhaji Umar Saro, the billionaire businessman seems to be a little bit on the quiet side, but his darling wife, Alhaja Tinuke is close to other super rich billionaire’s wives. They are said to be great philanthropists who will never settle for less to make sure people are happy. Some even said they go out of their way to satisfy others. This must have been why many kept the 3-days for the Saros as their son, Tajudeen Iyanda walked down the aisle.

THE GROOM, TAJUDEEN’S SOFT SIDE CAME TO FORE

Many who believed that Tajudden Iyanda is a tough guy were surprised to see his soft side last week as he took that biggest step of his life. Not only was joy radiating all over him, he couldn’t help but smile at intervals at his beautiful wife while he held her hand and whispered softly into her ears. One needed not be told that Tajudeen loves Bibi as he quickly picked her up during the engagement anchored by “Ile-Okoya”.  It was written all over him that he had seen his missing ribs in Bibi Martins.

Many of the guests couldn’t take their eyes off his luxury shoes. Of course, Tajudeen is known to be a powerful dresser and his chains of friends are also super rich Lagos big boys. The high point of the engagement was when Tajudeen hugged his mum and tears filled his eyes. Even his friend couldn’t help but marvel at the love he has for his parents.

AND THE BRIDE, BIBI’S JOY Knew

Sighting Bibi Martins from afar, one can’t help but appreciate her ebony pretty complexion. Those who are close to her said she combinea beauty with brain. This must have been what attracted Tajudeen to her 9-years ago in Lagos when they met on the Island. Bibi walked like an angel and many couldn’t take their eyes off her special Komole by Deola Saego. Her make-up was well applied by the queen of make-up herself banksbmpro while her headgear was styled by @taiwos_touch. Kudos to  the stylist who styled Bibi @junebugshpr as she made sure her second appearance of flower yellow attire made many of the guests turn 360 while her 18carat earrings did the talking while she moved.

If there is anybody who’s joy was so obvious at the wedding, it is the bride and groom’s parents. Their joy knew no bounds as they moved from table to table to greet their guests. Alhaja Tinuke Saro was filled with joy as she was spotted in a dusty pink and cream luxury lace matched with dusty pink headgear. Her beautiful attire was rocked with mother of all gold. So also is the bride’s mother, Mrs. Omokehinde Martins. She was full of smiles seeing her daughter signing the dotted lines.

Alhaja Tinuke Saros has her chains of friends who always throw their weight behind her whenever they have a party. They wear same attire, rock same headgear and will play visible roles at her event. This was what happened last week Wednesday at the engagement of Tajudeen and Bibi Saro. We are talking about Alhaja Bisi Abiola and  Alhaja Fatimo Adegunwa. They rocked the same attire with Alhaja Tinuke Saro. They were also very visible as they came with their large guests while they had a special table too.

MANY BILLIONAIRES MADE IT

It was an array of many super rich Nigerians at the wedding of the son of one of their own. They were not just early callers; they made sure they spent many hours with the groom’s father, Alhaji Umar Saro. They also had a table reserved for all the billionaires. Among those sighted were Aliko Dangote, Femi Otedola, Alhaji Rasak Okoya, rtd Musiliu Smith, Alex Duduyemi (Aro of the Source), Alhaji Daranijo, Senator Musiliu Obanikoro, Mr Wale Babalakin(SAN), to mention few.

THE FABRICROOM BELLAS STOLE THE SHOW

Mrs. Kemi Adamu bellas can’t be overlooked whenever she handles any Nigeria Owambe. This was why the couple made sure she handled their wedding aso-ebi with the wedding hashtag “onthebits2018”. Her blue-black lace matched with sky-blue/pale blue headgear. The couple were not the only one who had great moments at their wedding, even their friends cannot forget in a hurry how they were treated like Queens at Bibi and Taju’s wedding.

WHAT IS THE SECRET OF THIS LAGOS SOCIETY WOMEN’S YOUTHFUL LOOK?

These Lagos society women are popular but despite their age, they still look youthful as they are not aging at all. They all came out in their large numbers for Tajudeen and Bibi’s engagement. Among those sighted were Otunba Folasade Adesoye, Olori Risikat Adams, Mrs Funke  Akinyera, Chief Mrs. Tinuke Abioro, rtd. Hon. Titi Oseni, Bimbo Folawiyo, Mrs Afolabi(L.a.x mum), Alhaja Kuburat Akube to mention just a few.