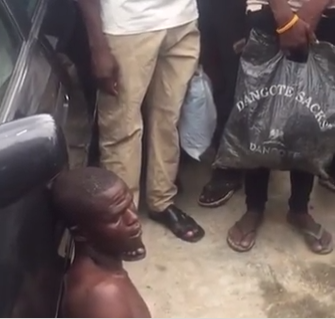 A man, alleged to be a hired assassin sent from Sapele in Delta state to kill a boutique owner in Jakande, was caught, stripped, and beaten by residents. The man escaped getting burnt alive thanks to police intervention.

The attack on the alleged criminal was filmed and shared online.
From the video, it can be gleaned that the man bit his victim and tried to strangle her but she was able to scream and that got people’s attention. The woman has been taken to the hospital to receive medical attention.
“He bite her. He wan kill am. He wan strangle am. She don go hospital. She get injury,” one of the men surrounding the naked suspect can be heard telling a police man who requested to know where the victim was.
See the video below.